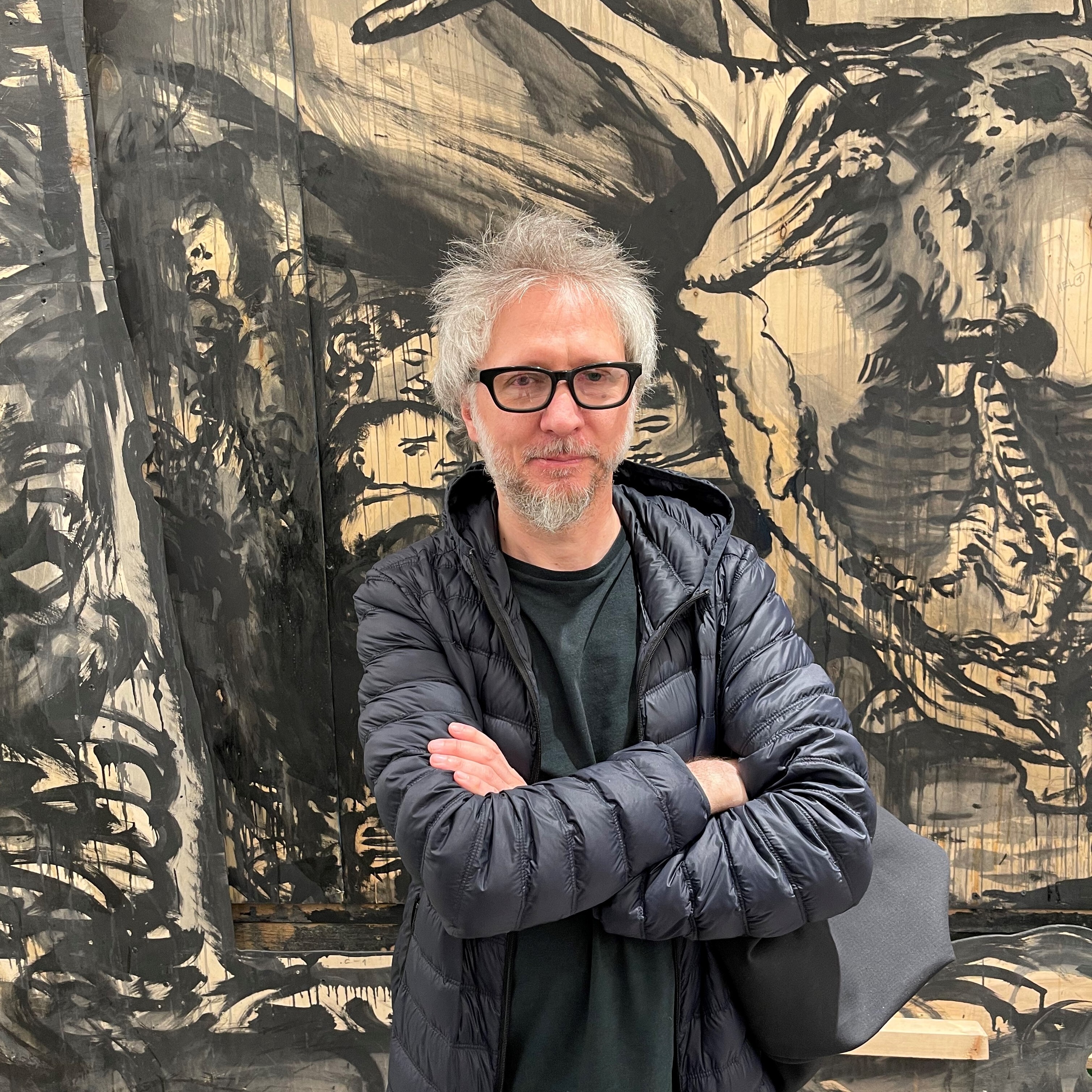 A set designer by profession, Alexander Shishkin-Hokusai (b. 1969) works with the directors Andrei Moguchy and Yury Butusov and designs productions for
the leading theaters of Moscow and St. Petersburg. In 2008, 2011, 2012 and 2014 he won Golden Mask awards in the Artist category. Since 2010 he has been a member of the artists’ association "Parasite art gallery". In 2012 and 2016 he was nominated for the "Project of the year" Kandinsky prize. He won a Sergei Kuryokhin prize in 2016.

Shishkin-Hokusai separates his work in the theater and in modern art, working as an artist under the pseudonym "Hokusai": "Shishkin worked with nature. But I added the antagonist Shishkin-Hokusai to this. Hokusai with characters, with figurative plastic, acting in a sense. In this way, I encode two vectors for myself: Shishkin as an environmental aspect, and Hokusai as a psychodrama, working with Homo Sapiens" the artist explains.

His first project in the field of modern art, "Juices of Light" in 2012 was nominated for the Kandinsky prize. Over the next three years, Shishkin-Hokusai showed himself to be a master of public art, placing characters he had invented in public spaces: various figures of girls drawn with black paint and cut out of plywood.

In 2017, Shishkin-Hokusai took part in the first "Garage Museum" Triennial of Russian modern art, using a temporary museum pavilion created by Shigeru Ban for his installation.

Shortly before his 50th birthday in 2019, Shishkin-Hokusai participated in the Russian pavilion at the 58th Venice biennale, where he presented the installation "The Flemish School".

Aleksandr Shishkin-Hokusai conceives the mood of his new project “Riva degli Schiavi” ("Riverbank of Slaves") as „life after death“. Turning back to the project made specially for the Russian pavilion at the Venice Biennale, after the long break burdened by the pandemic, the artist pursues getting the new glance and new experience of the sophisticated kinetics of the installation dedicated to the Hermitage. The Venetian work at “Riva degli Schiavi” will be augmented and reimagined with a series of new items based on a study of the iconography of glossy magazines and the faces of models from outside Europe. The blue color, which came to the European part of the world from India, Iran and Afghanistan, plays a key role here. In the new series, Shishkin-Hokusai experiments with the attributes of slavery (ropes, chains) and introduces a concept of art as a “living machine”, capable of suffering and changing as viewers look at it and touch it.

Here and after text by Valentin Dyakonov

“Riverbank of Slaves” repatriates works made by the artist for the Russian pavilion at the Venice biennale in 2019, and supplements them with new items. Unlike the installation by Alexander Sokurov, Shishkin-Hokusai’s project was not shown at the Hermitage. This is understandable: the Hermitage in Shihskin-Hokusia’s version has the same relation to the museum itself as Heiner Müller’s play “The Hamlet Machine” has to Shakespeare’s original. The artist rejects the transmission of static symbols of major culture in favor of an active approach to the dramaturgy of museum display. While the official narrative of the pavilion threatened to become a memorial for high European culture, Shishkin-Hokusai’s work, especially with its new elements, seems to be a “classic on the ruins of Europe” (as Müller described Antonin Artaud’s texts in a small but powerful work of 1974).

The Hermitage machine is dismantled into parts, and in the ritual unity of viewers with the paintings, lacunae appear. They are filled by a series of uncharacteristically blue sculptures, which seem to be a response to the calls for decolonization of national museums. Portraits of female models from South East Asia and Africa are displayed with anthropomorphic bags tied up with ropes. But the story of these items is not a battle with forced exoticization. It is another consideration of the position of “living machines”, whether they are servants as robots, or overseers of the ideals of communities. Is a “museum without cruelty” possible, in which pictures are free from consumer reflex, from the status of inviolable treasures, and from evidence in studying the manipulation of power? And what needs to be freed most of all, the viewer or the work?

Shishkin-Hokusai shuffles compositional schemes of imperial imagery (frames, cartouches, classical poses and groups), returning them to the state of a sketch. Depriving allegories and plant symbolism of the triumph of asserting geopolitical victories, the artist uses them as a frame for 3D-videos, where the statues are covered in pink liquid (in bloody sweat caused by stress?) Shishkin-Hokusai sees “living machines” in works of art. The work is born from the organics of the view and desire, remaining a product of technical thought, of completion.

Go to the store