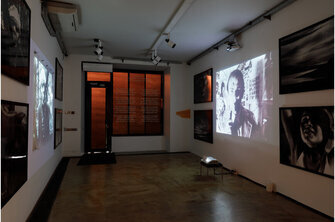 The exhibition was organized with the assistance of the artist’s family. The Marina Gisich Gallery team would like to express our gratitude to Timofey Yufit and Maria Godovannaya.

Marina Gisich Gallery presents the works of Yevgeny Yufit, the Saint Petersburg film director, artist, and founder of necrorealism, which is possibly the most paradoxical and original movement in Russian art of the last 40 years. The exhibition’s title plays off of Alexander Dubček’s phrase “socialism with a human face” referring to the democratic reforms in Czechoslovakia in 1968 that attempted to soften the totalitarian regime.

The necro movement began in the early 80s with impromptu scenes that shocked the public, performed by a group of young men led by Yufit. The main principles of this “wild and senseless activity” (Yufit’s description) were proclaimed to be “stupidity, energy and brazenness”. Achieving these tenets meant the participants were “hardcore” and ultimately could attain “ferocity”. During one of these performances that focused on beating up a realistic-looking mannequin intended for training medical students, random onlookers mistook Yufit for a maniac or a spy filming a monstrous act of violence from behind a corner. They called the police and Yufit was taken into custody and his camera was confiscated. When the film was later developed, Yufit was summoned to Bolshoy Dom (KGB headquarters), where the final verdict was that the idiocy of everything he had filmed absolved him of responsibility.

The early stages of Leningrad necrorealism were spontaneous and radical, but at the same time the group participants were subconsciously mirroring the essence of their surrounding reality. “Both the culture and the reality of late-Soviet life were marked by a highy developed and rigid system of intermediation <…> Young Leningrad artists, perhaps without consciously realizing it at first, set a goal to penetrate this layer of intermediation and break through to something alive. I should emphasize that this was not a struggle “against” something (the regime, ideology, or authorities established in official and unofficial art and so on). This was a struggle “for”: for their natural right to unmediated contact with life, for their immediate personal subsistence on art <…> It was a transgressive gesture of breaking through the layers of intermediation in order to reach the living!” (from Alexander Borovsky’s article “Necroprovocation” in the catalog for the “Necrorealism” exhibition, MMOMA, 2011).

This is how Yevgeny Yufit described his early work in an interview for Art of Film magazine: “I never tried to formulate a clearly defined manifest because that would contradict the spontaneity of our movement. This aesthetic was spawned by chaos and pure artistic freedom, and following specific canons would deprive it of its freshness and originality. From the very beginning of the earliest works, the themes of death, suicide and various types of psychopathic behavior were present, but it was all presented in the hypertrophic inverted form of social grotesque and dark humor.”

This is how Sergey Dobrotvorsky sees Yufit back then: “If I had to concoct Yufit’s image from the rumors and scandals surrounding him, the first thing that comes to mind is not enfant terrible, but the boogey man. He was the leader of the Leningrad school of Parallel Cinema, paying tribute to radical Russian punk, an extremist, master of shock on the screen, and a proponent of “pure idiocy, undefiled by the subconscious or instinct”. His list of “primary social characteristics” is crowned by the concept of “necrorealism,” which literally means “deadrealism”. Life after death. Adipose tissue and decaying flesh. The followers of the necro style that emerged in the mid-80s in the Leningrad underground and swept through literature, art, songwriting and film, set out to study the fate of the body after it has been abandoned by the soul. Their studies were aided not by academics or classic films, but by atlases of forensic medicine and magnificent ideological shows where noble zombies uttered dead words from high tribunes.”

The scandals and rumors took their toll. Art lovers, critics, and even many representatives of the avant-garde, especially in Moscow, tried to avoid any encounters with necrorealism. Many saw an allusion to necrophilia in the very name of the movement. It’s true that the disturbing prefix “necro” seemed to stigmatize the group — on the one hand, it condemned it to a life sentence in the underground, and on the other hand, it guaranteed its relative integrity, ensuring that necrorealism would never be replicated in mass culture.

The end of Perestroika brought a formal recognition of necrorealism. The works of necrorealist artists were shown at numerous art exhibitions around the world. In 1989, Yufit shot “Knights of the Skies” – his first film on thirty-five millimeter film. The release of this film was a key moment for necrorealism’s emergence from the underground. Yufit became one of the first independent directors to produce films within the framework of the state system. Yufit’s following film, “Daddy, Father Frost is Dead” (1991), shot in the studio of Aleksei German, won the Grand Prix at the international film festival in Rimini in 1992. The crowning recognition of necrorealism was a large-scale retrospective of the movement at the Moscow Museum of Modern Art held in 2011.

Despite all this, necrorealism still doesn’t fit into any Overton windows. Maybe this is the secret to the magic energy of Yevgeny Yufit, whose works remain on the edge of reality, but will never lose their humanity. 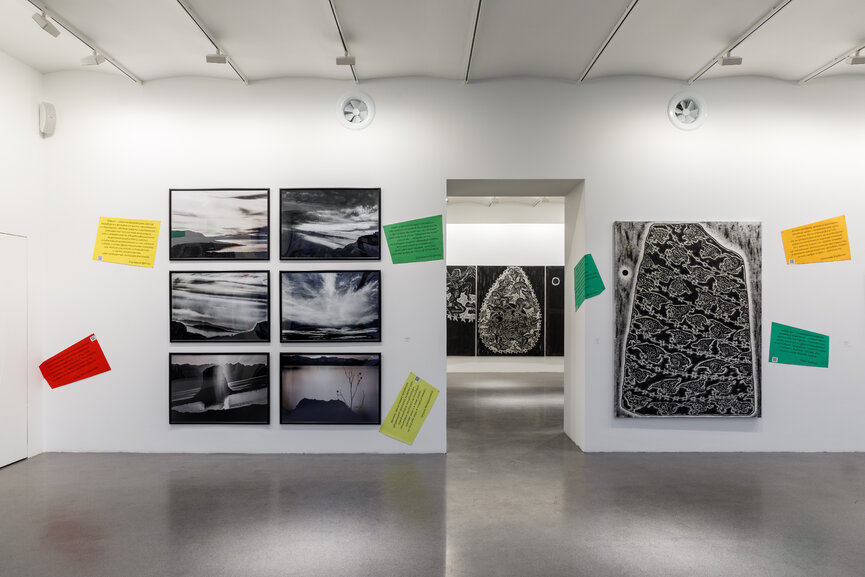 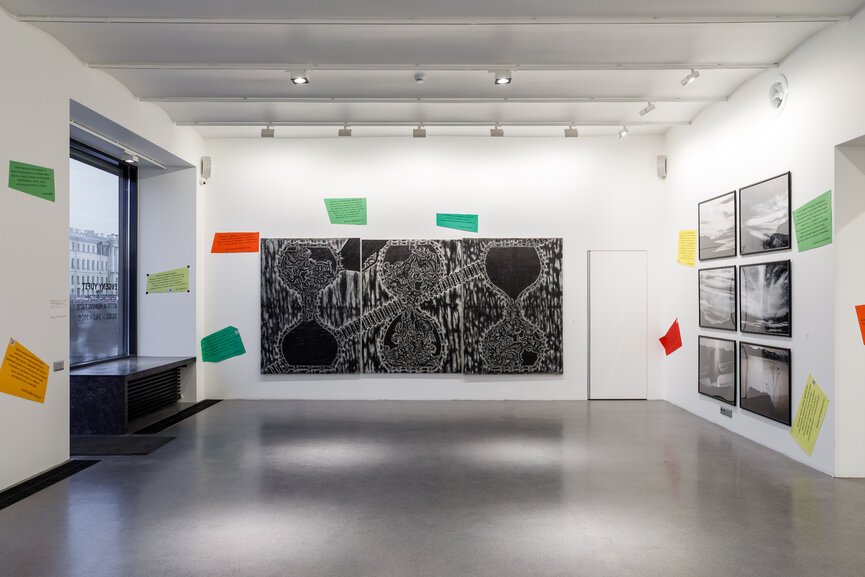 in the center: "the TIME" thiptych 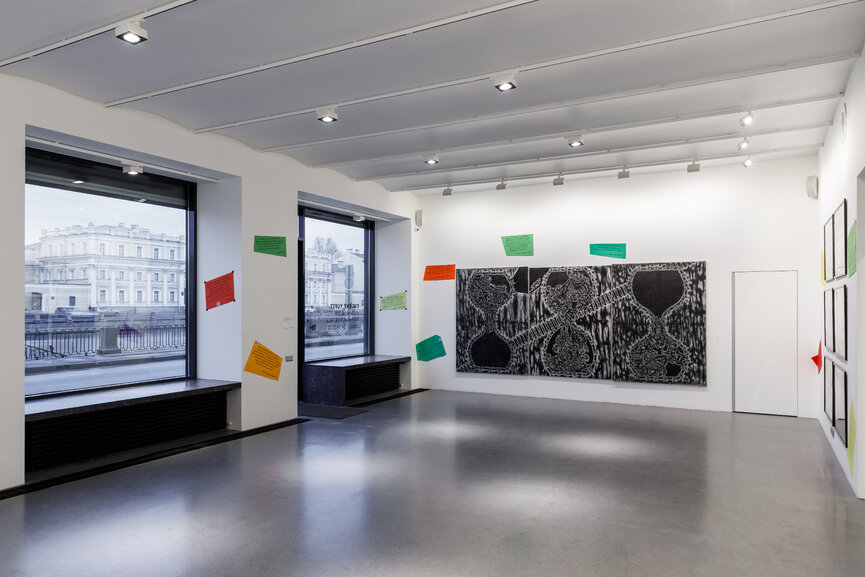 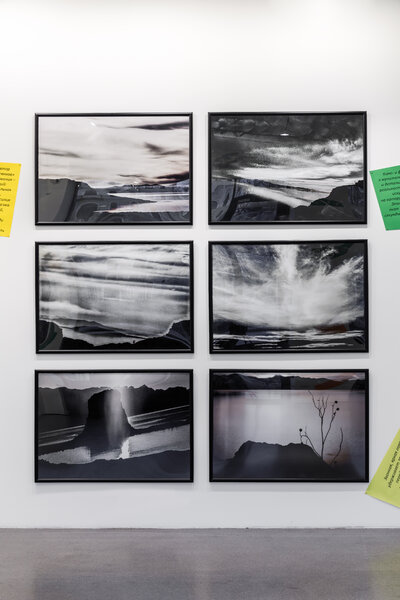 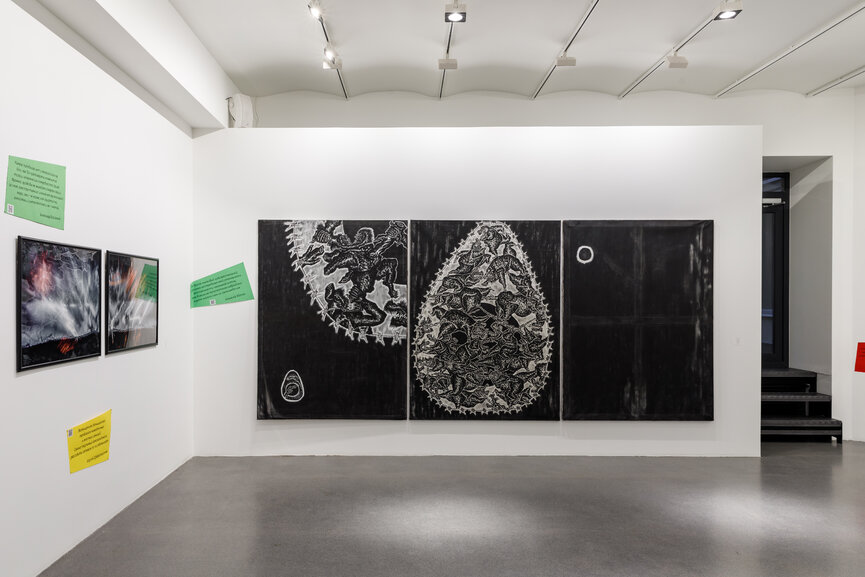 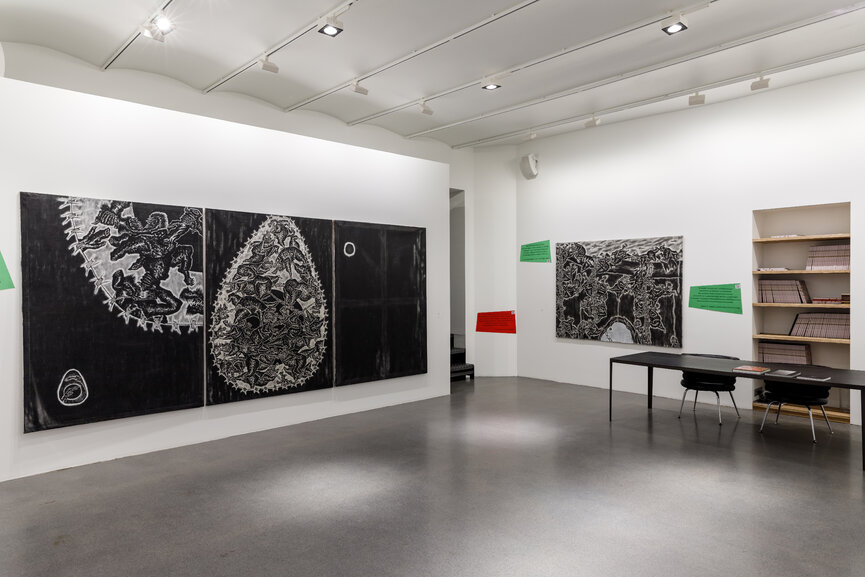 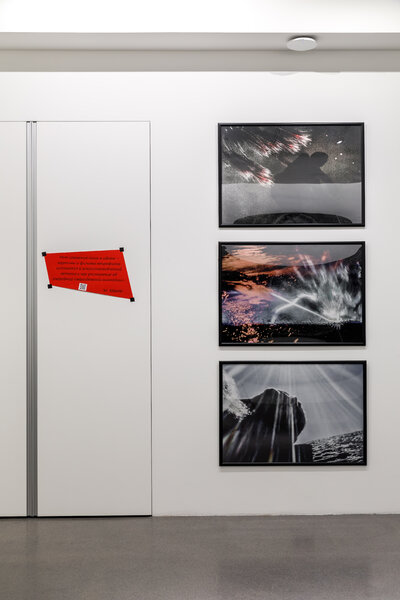 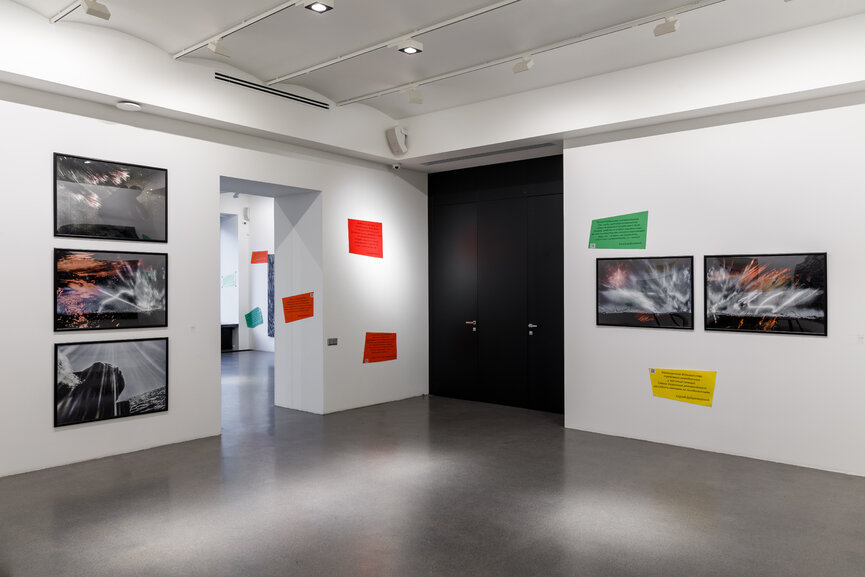 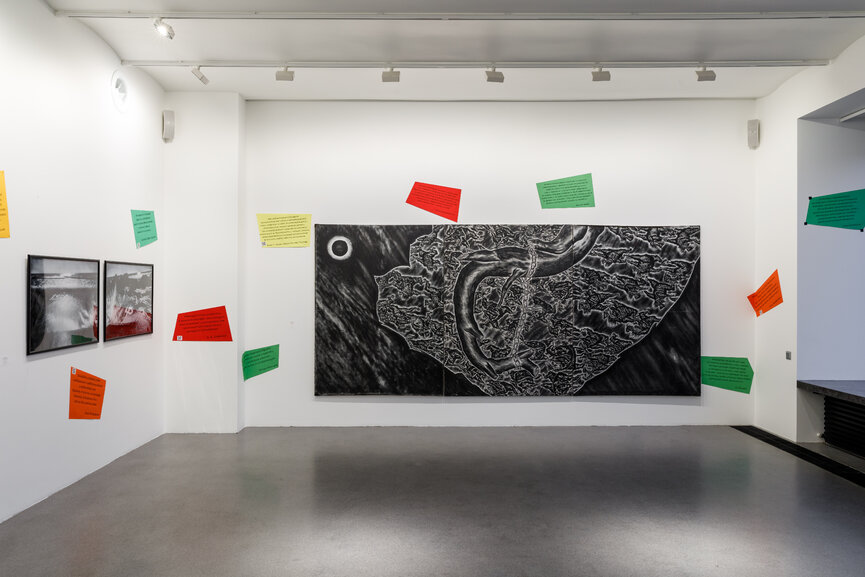 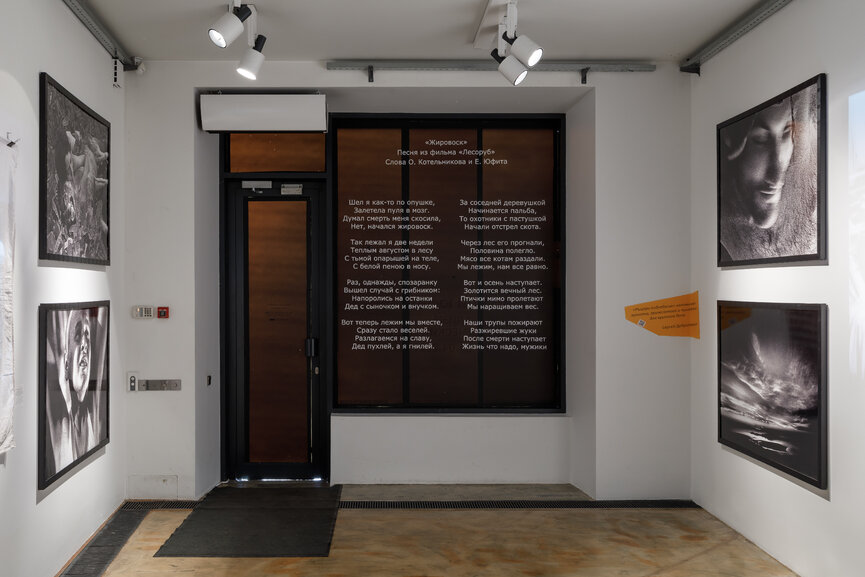 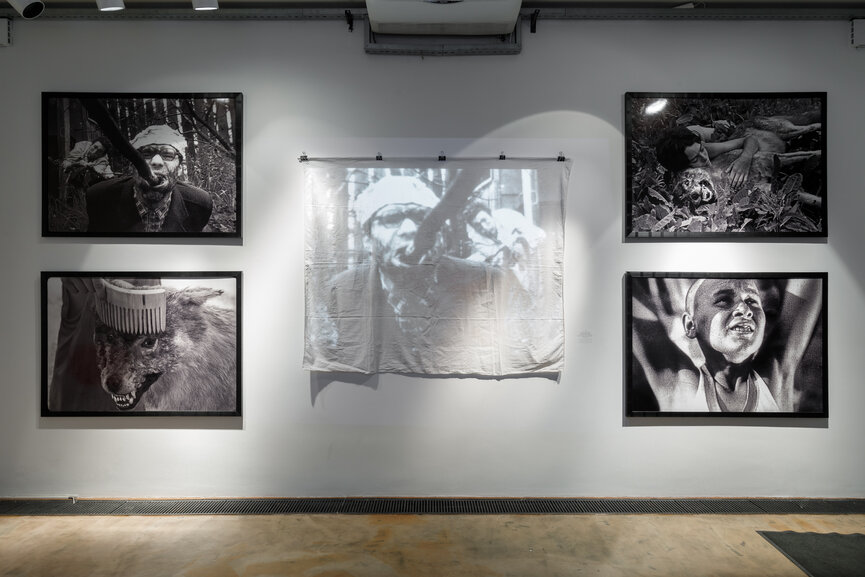 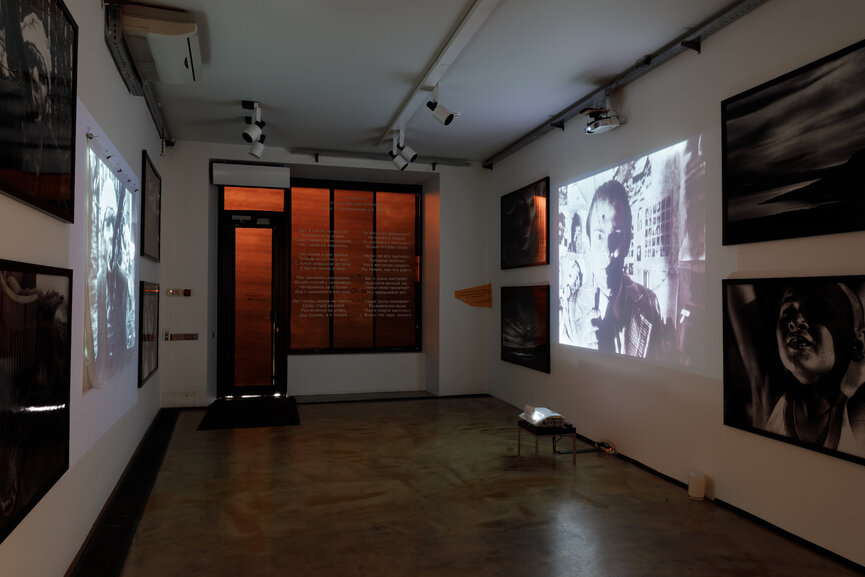 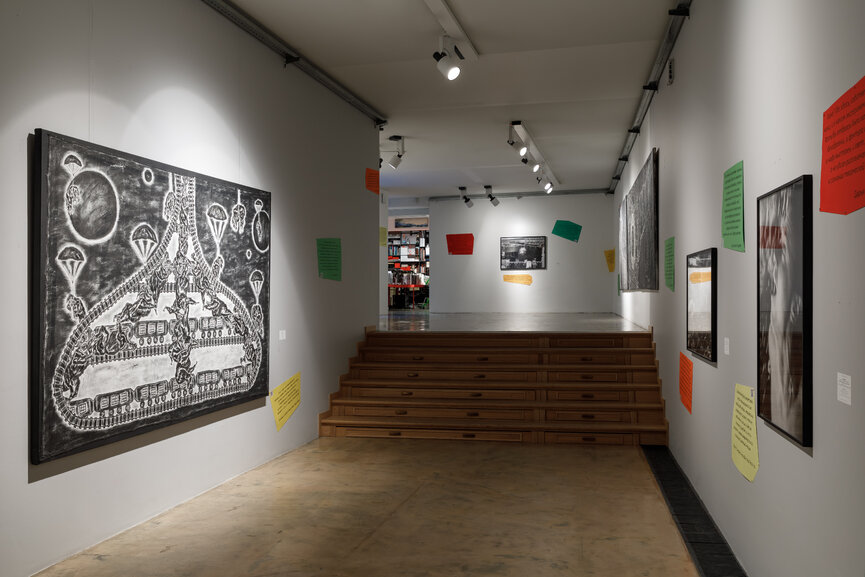 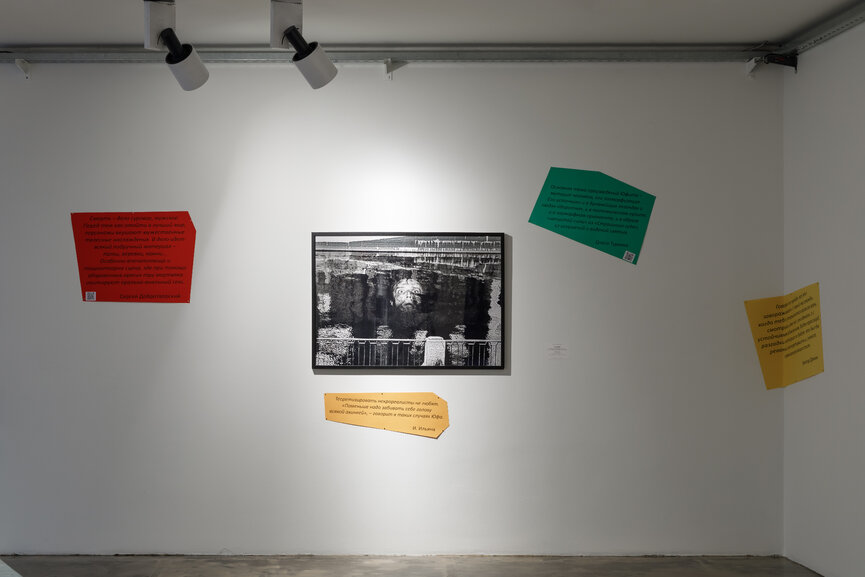 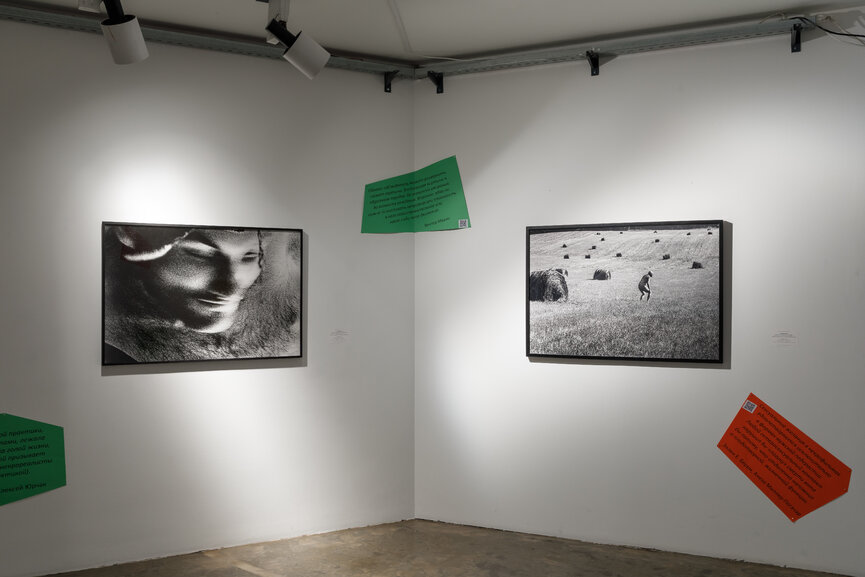 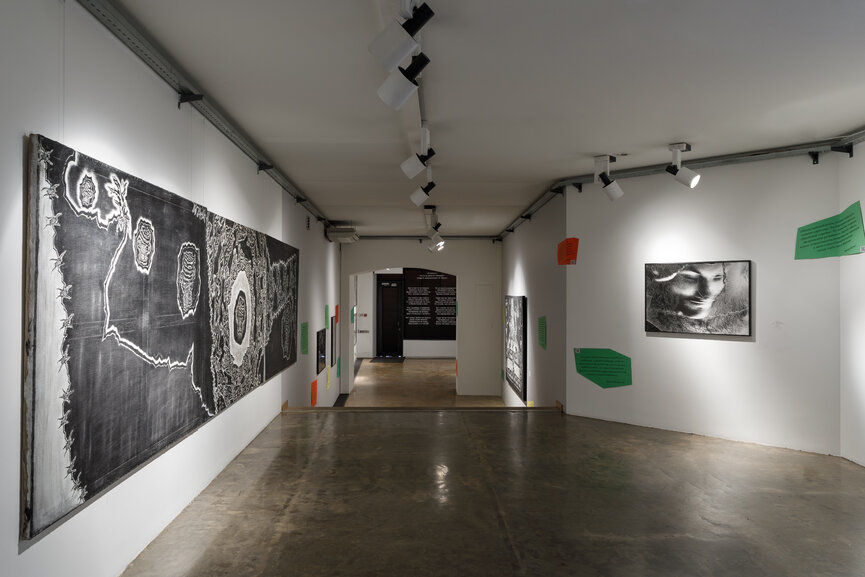 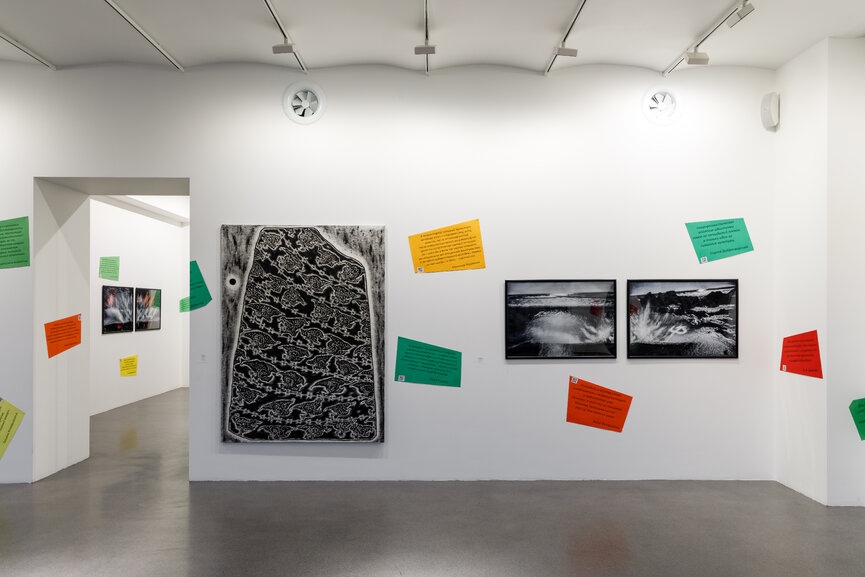 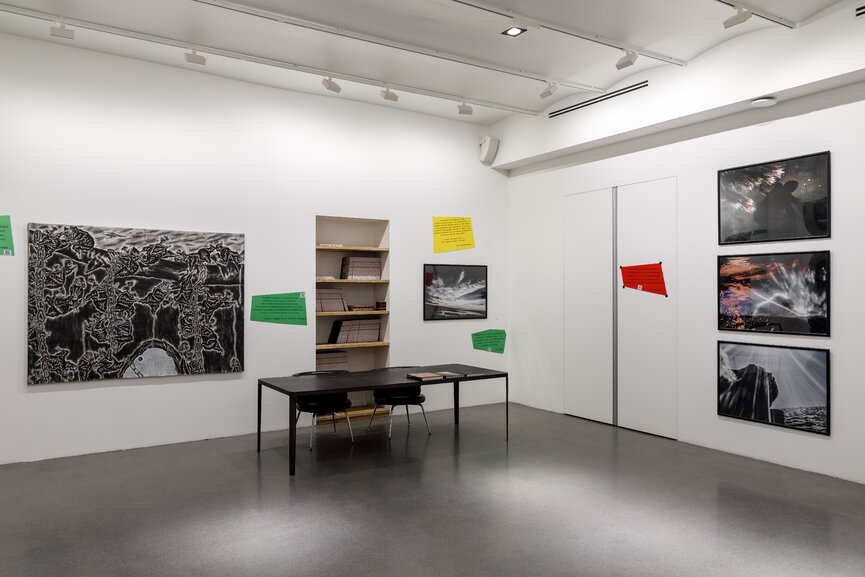 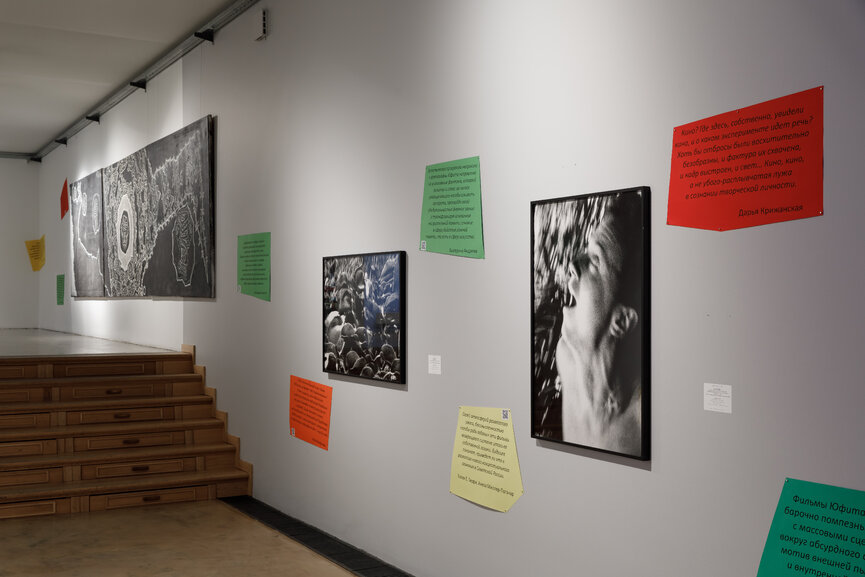 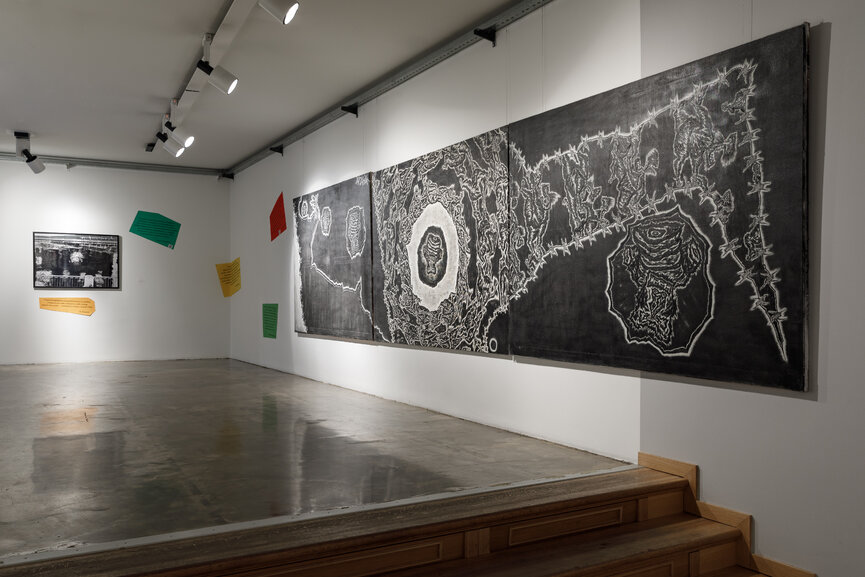 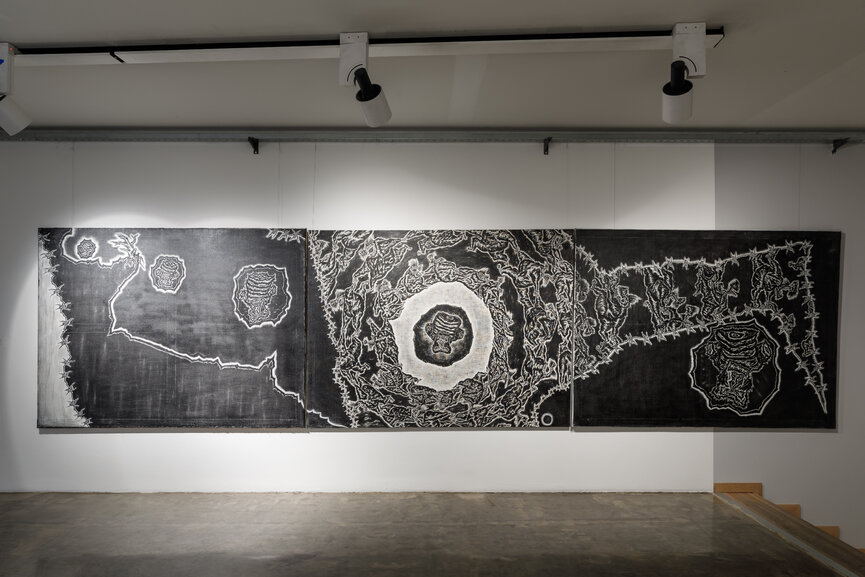 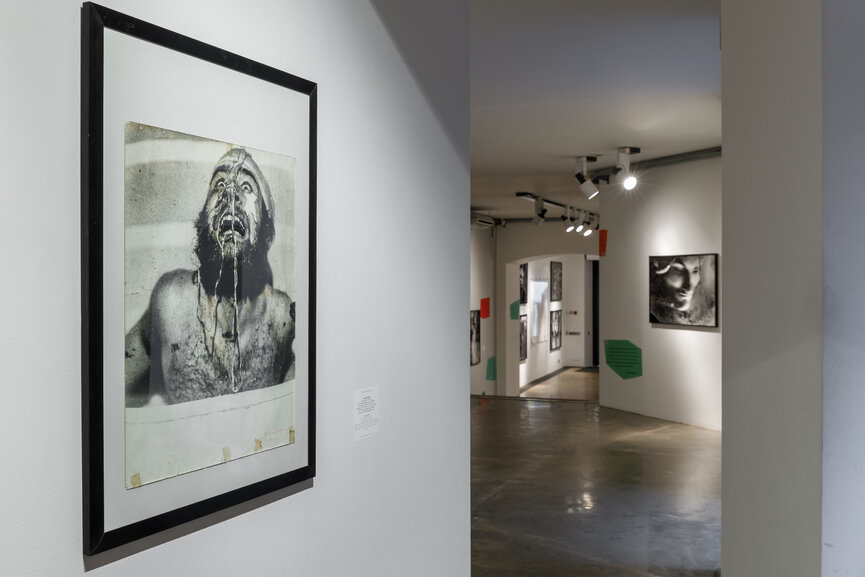 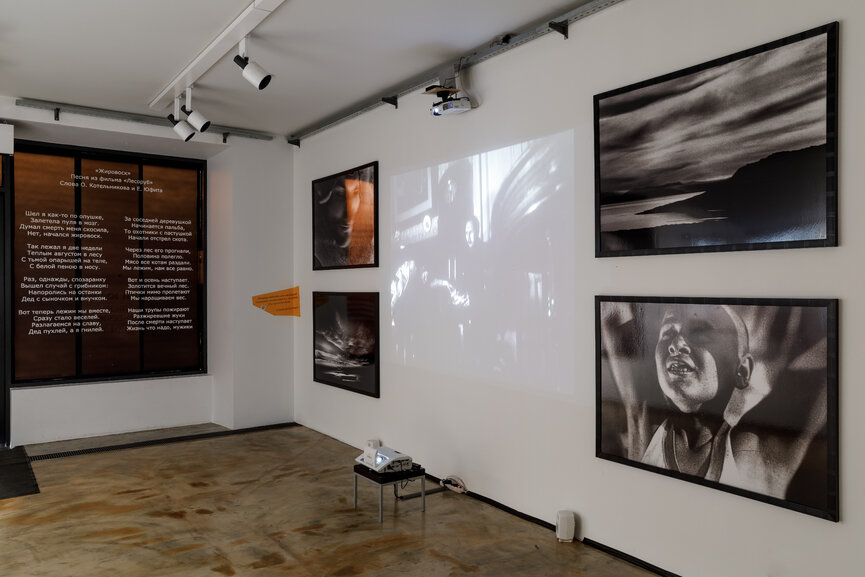 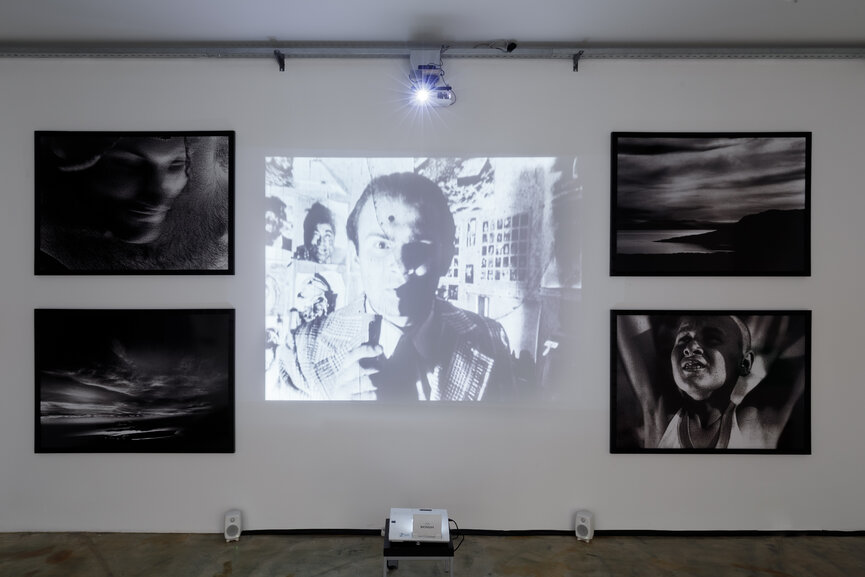