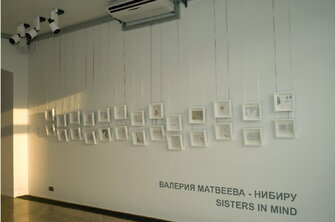 The art of Valeriya Matveeva-Nibiru stands out for both its delicacy and ferocity. Visitors to the artist’s site are greeted by her favorite heroine - a magical little girl, like a phantom spider’s web, woven of white lines on a coal-black background. The girl is being pulled in by claws and tentacles to a monster that has arisen from those depths of the subconscious that can only be compared to the Mariana Trench, a type of crab-stingray-octopus combination. However, as in Nature, there is nothing more resilient than a web, and this is also true for the webs created from linear drawings of fairytale girls. In their following incarnations, the Gothic Thumbelinas of Valeriya Matveeva take off on extraterrestrial travels, expel a myriad of amazing creatures from themselves, and sometimes rearrange their living space by organizing mass executions of fantastical animals or their household substitutes, plush toys. Valeriya Matveeva, well known for her staged photography and videos, only recently began to draw and paint, and the fantasy land that has emerged in her studio in less than a year is striking in its originality and variety of landscape and inhabitants.

The strength of the web can be justified by its purpose – it is a weightless spatial structure, an artificial screen, where desire must steadily materialize in its most ruthless form. Merciless beauty, as the embodiment of desire on the brink of death, holds fascination. The first to sing its rapture were the European Romantics, the earliest people of the modern epoch. Their arrival was accompanied by the appearance of Mignon, the ancestress of all fantasy girls, little dolls who were created, killed, and prepared for the eternal return of J.W. von Goethe. The cosmic origin of Mignon, a little circus “songbird,” thrown into the turbulence of love and capable of lighting a sea of creativity, was immediately recognized by Friedrich Schlegel, who compared Goethe’s heroine to a comet. Mignon, who became the soul of European romance music, was followed in literature by a succession of magical girls, who endured their initiation through similar or different passions: Thumbelina, Sonya Marmeladova, Alice, and Lolita. And Victorian England becomes the birthplace of the art of fairy painting, representing the world of fairies and elves. Fairy painting masters, such as Richard Dedd and Charles Doyle (the father of Arthur Konan-Doyle), drew inspiration from various sources, including their own hallucinations, William Shakespeare’s plays based on fantasy (The Tempest, A Winter’s Tale) and the romantic world of the artists William Blake and Johann Heinrich Fussli. Incidentally, Fussli was also the favorite artist of Goethe, who acquired one of the most frightening of his visions, Nightmare.

The 20th century put an end to fairy tales, as it equipped us with the Golden Age of engineering, and fans of fantasy, especially the followers of the cult of magical girls, were marginalized. Men dominated the game almost the entire century, but in the 1990’s the world picture began to change noticeably. Magical girls, like lightning bolts of pure desire beyond good and evil, have been returning in different guises, from the Alices and Lolitas on the podiums to the Japanese “girl David” in Kill Bill 2. Pavel Pepperstein, the teacher of Valeriya Matveeva, on the eve of the 21st century predicted the phenomenon of “Rave princesses” as heroes of our time. What does such a change have to promise: the establishment of gender parity, or upheaval through the end of everything, because once again the actors are militant female deities here from the beginning of time?  Valeriya Matveeva-Nibiru is wondering about the second possibility through each one of her drawings, leading it across paper or canvas, as on a wax tablet that can infinitely manifest images from its pliable, malleable body, swallowing them back, and then giving birth to them again. The imagination of the artist is as unpredictable as the imagination of the fantasy illustrators Gustav Doré or Hayao Miyazaki. 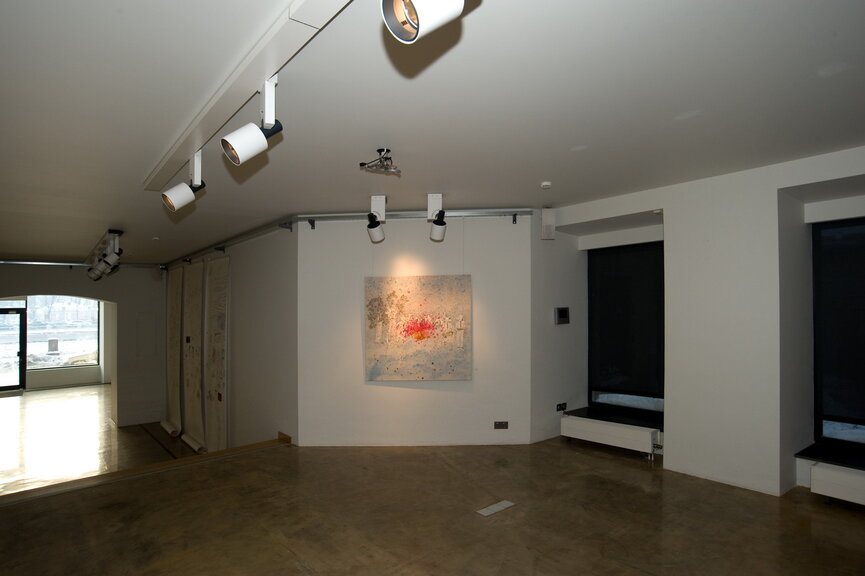 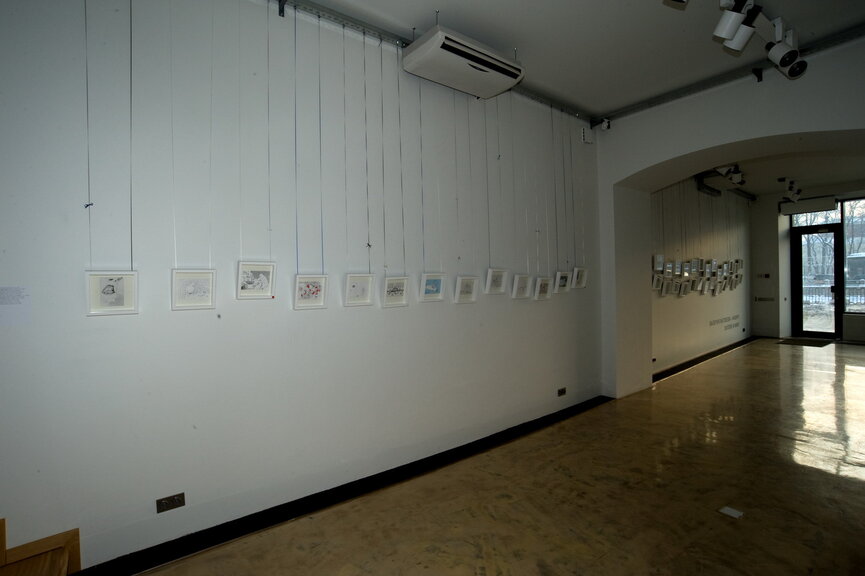 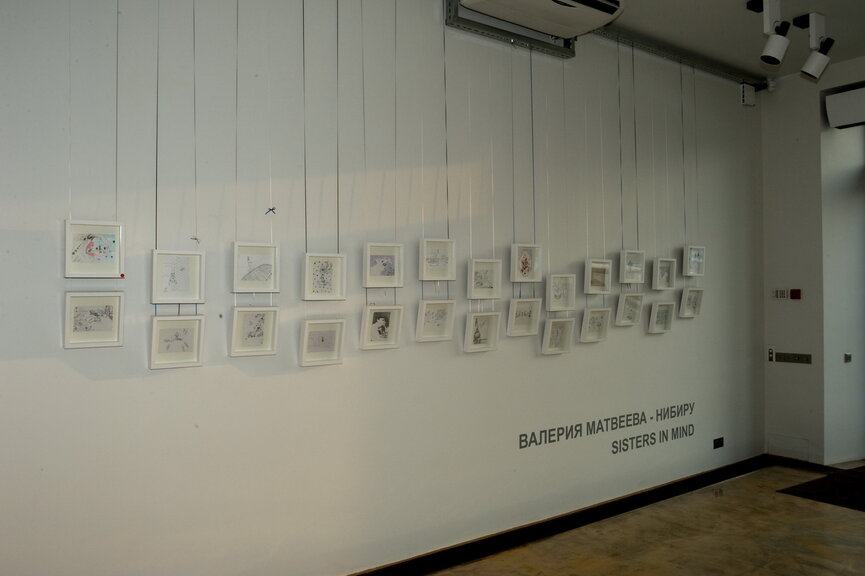 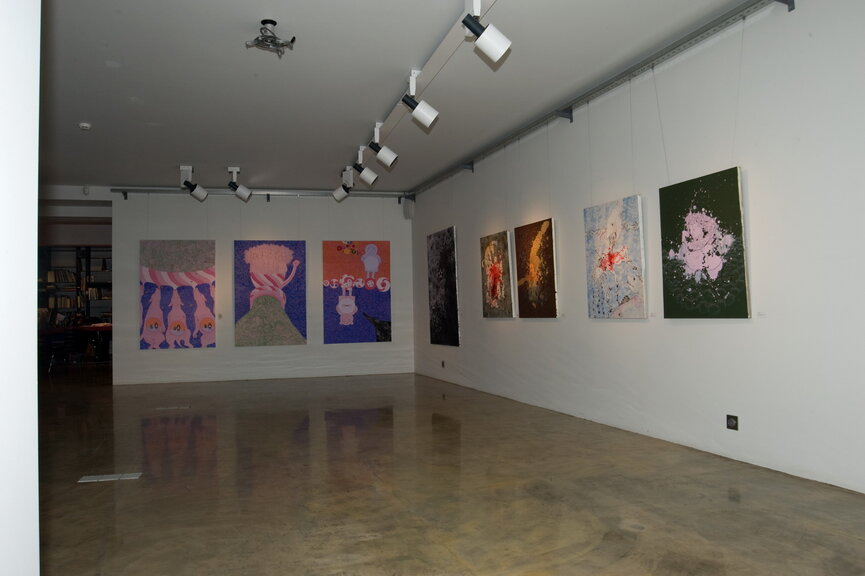 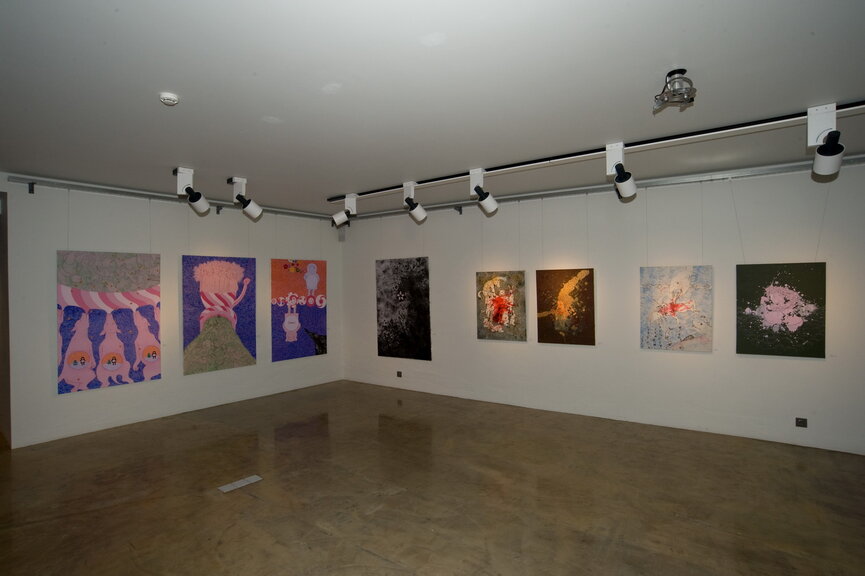 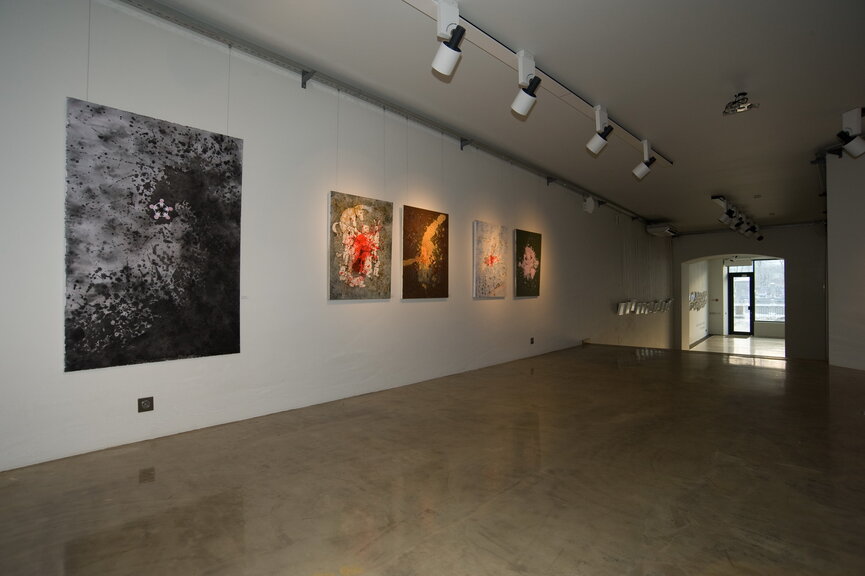 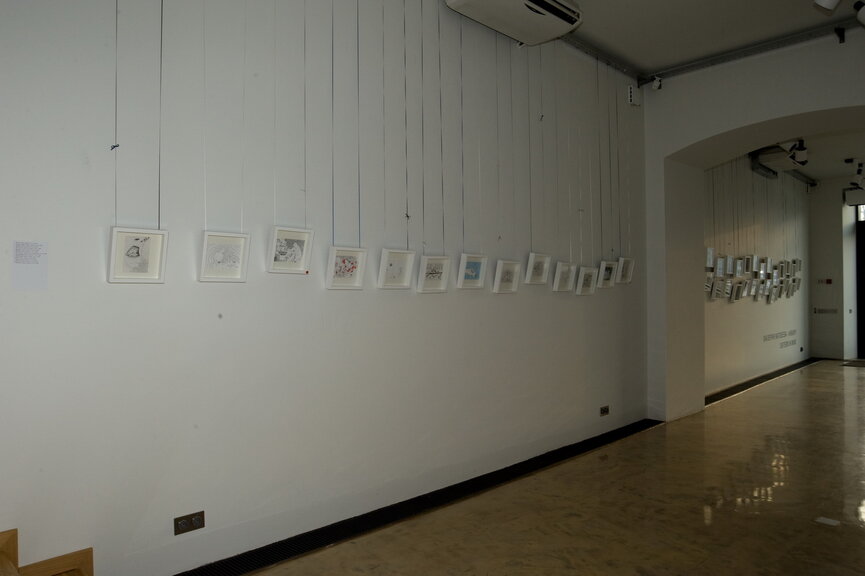 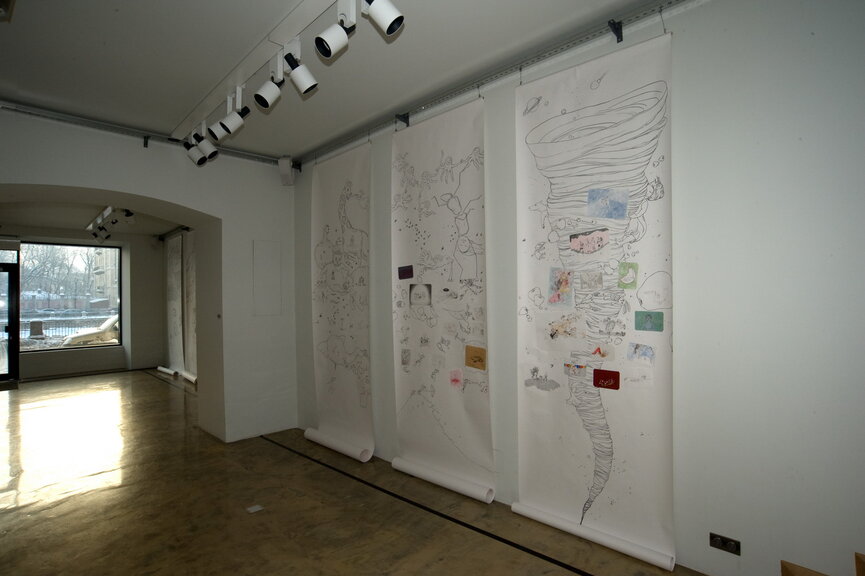 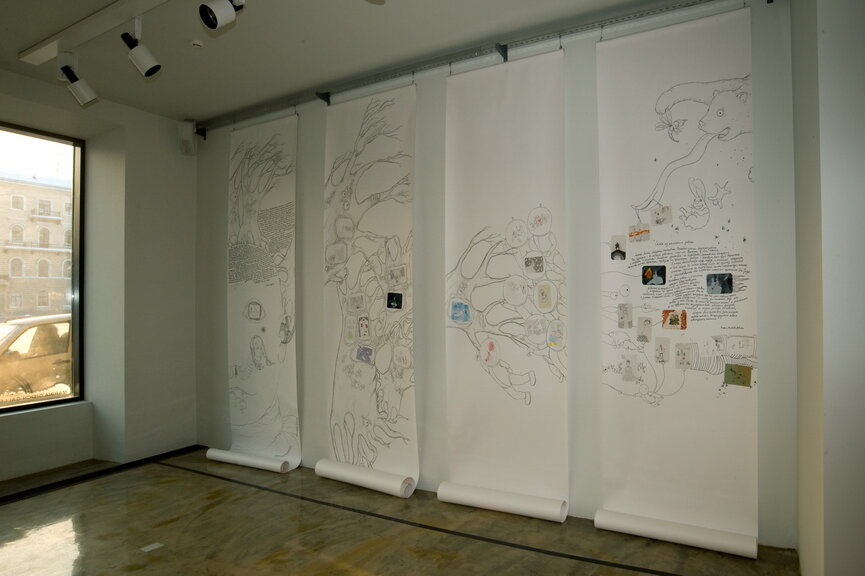 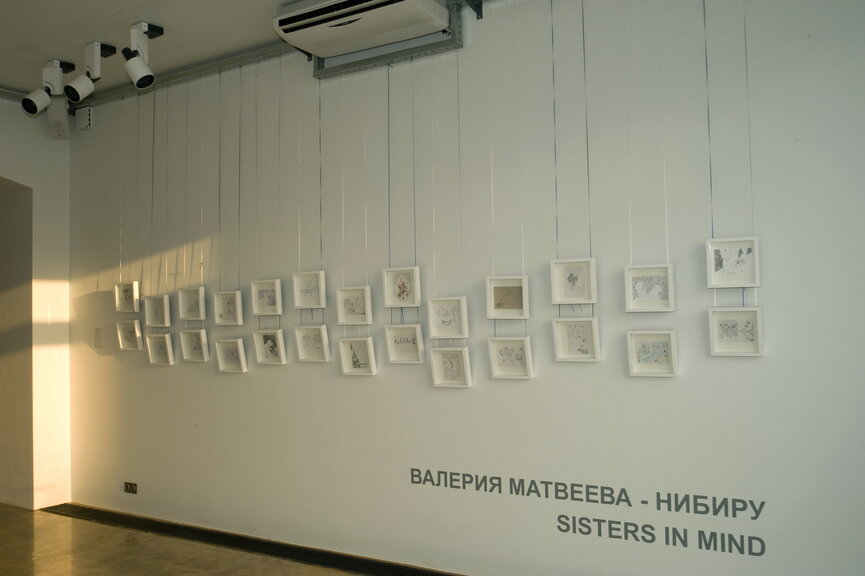 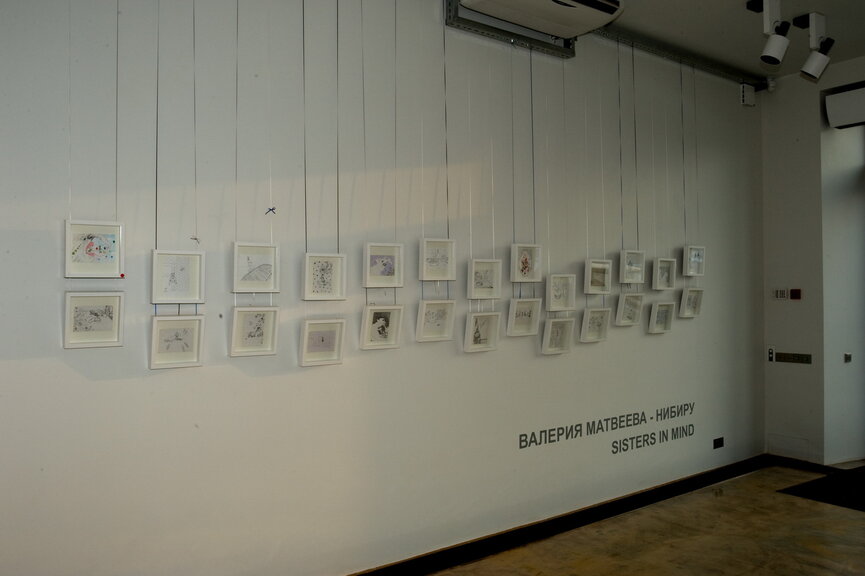