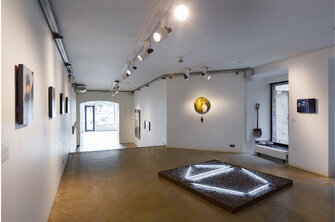 This work is about the ontology of flow, as in Merleau-Ponty:

time is not a line but a network of intentionality,

and it tells of the impossibility of experiencing time today as a flow.

This is addressed to the living present and the problem of its museification.

Alexander Morozov always surprises for the breath of his artistic aspirations. He makes paintings, creates works that look like models and sketches of buildings from a penitentiary complex, writes texts, immortalizes in marble long-forgotten philosophical terms, takes pictures and even records the flights of birds from the balcony of his studio – incidentally, this work won the jury of on small but cutting edge awards and received the special mention prize. Is understanding the feelings of the contemporary art lovers so dissimilar to the flight of birds, which can be easily associated to artistic freedom and imagination, to the independence and indomitability of art?

However, the issue of creative freedom in Alexander Morozov is not as simple as it might seem. Despite the wide specter of his interests, the artist is far from being impulsive. In particular, the immediacy of his actions is in fact far from impulsiveness. On the contrary, it would be worth mentioning the other pole of what is called spontaneity: reasonableness, exact calculation and close attention to detail. Mobility and composure in the artist’s character make us think of mercury. In an interview, Pavel Pepperstein, the guru of the Moscow Young Conceptualists (also called “Psychedelic Realism”), said that the most valuable feature in an artist is his ability to listen to the noise from outside when going through a storm of passions, to strive, so to speak, to dream letting the air through from the window. It is possible to feel a light draught of irony in all of Morozov’s gloomyly dreamlike canvases, like for example the pink and cornflower blue lambskin swirls in “Easter Procession”.

But we must jump to the end. We must instead take into consideration the principle of separateness, which is so important in “Cosa Mentale”. In these paintings there is some sort of separation and isolation – at least for what concerns the outside – as in the title itself. Somehow, all these intimate, small, and carefully painted works are related to cabbage soup: the recipe of this traditional dish has been carefully rewritten by the artist. Viewers can learn about all the stages of its preparation, all movements – slicing, blanching, stabilizing, and so on. The mysterious magic of the gestures hidden in the recipe resonates as the alchemical kitchen of painting: rubbing pigment, mixing the emulsion, making the primer. Besides all the cross-references in the process of cutting, splitting and mixing, the recipe of this traditional dish refers to the universal and impersonal, because it has no author, “lyrics and music from tradition”. The same anonymity can be seen in each subject. They are as caught by the flash of a mobile phone from the flow of everyday life. As a matter of fact, they deliver no message.

These reflections, chandeliers, napes and hats can be read as the disembodied husk of a reproduction, if not the specifically bodily and material flow of the painting. Their smallness and fragmentation makes them "icons" of the virtual world. These scraps from everyday life, made with the technology of real icons (they are painted using egg tempera on chalk boards with gesso), are surprisingly dense and heavy. Their physicality is exaggerated by the sharp disjunction between the form of a kite and the material, boards on crossbars with oak dowels (to prevent humidity to bend the wood). First of all, the complex shapes of the boards call to mind the traditions of conquering the higher spheres, these “snake-like” curls-envelopes after hundreds of years of evolution have become a form of sending a message, that ideographic writing which a Homo habilis, a man skilled, in metaphysics possesses. “I create a thing, my presence embodies the tangible experience of addressing the sky – a cosa mentale of a human being” says the artist.

In this project it is also important the process of merging into one single work the immediate (the digital source of the images) with the timeless (the icon). The date the image was taken is saved in the digital file, the source code of both the tempera works and the large pictures. In order to combine the single artifacts into a single semantic field the author sets plastic coordinates: the highest point of heavenly radiance is a light object, and the most terrestrial is gravel.

The voids and gaps resulting by leaving large empty spaces between these works hanging on the wall sound rather sharply. This spatial slicing reveals a special rhythm and “syncopity” which format the everyday subjects. The resulting sequence of the sophisticated geometry painted boards acquires a new synchronic sound and becomes an ensemble to a ceremonial that raises the homo habilis to homo ludens. The whimsical shape reminds of topiary tree pruning in a French park, the haircut of poodles, models dancing in a line in M. Barney’s Cremaster. In his personal commentaries to the project, Alexander Morozov quotes the Surrealists. Of course, in his project it is clearly visible the recent violent manner of “training” the classical picture. However, if the Surrealists fought the rationality of traditional art, relying on the subjective impulses of the subconscious, modern globalist culture has to deal with the smaller homunculus than conservative bourgeois, an enemy of the Surrealists, and more terrible “user” in his faceless singularity. Subjectivism becomes the option of the consumer. To achieve liberation from the intolerable physicality of everyday life does not allow automatic writing. The way Morozov arranges his icons on the walls implies instead mechanical ballet or musical notation. His harsh staccato makes daily routine pulse accordingly to the newly invented rhythm, depriving of its unshakable confidence.

At times the rhythm stops and the mind is filled with silence. A phantasm enters, like a hot knife in butter, like “the smoking tail of weeping women” (W. H. Auden) or glowing night lights of the Titanic. The viewer is invited to experience, as once in the iconographic canon, apogee released from the selfless life of the visual image. 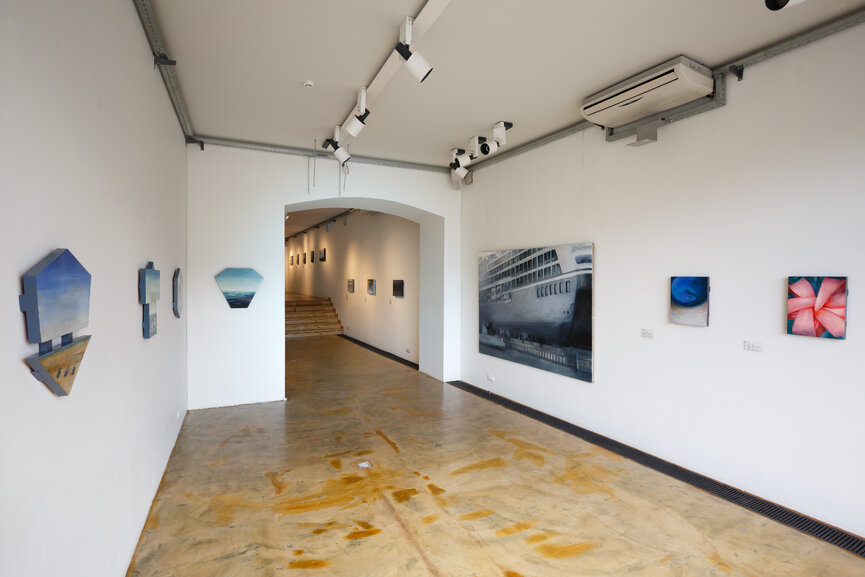 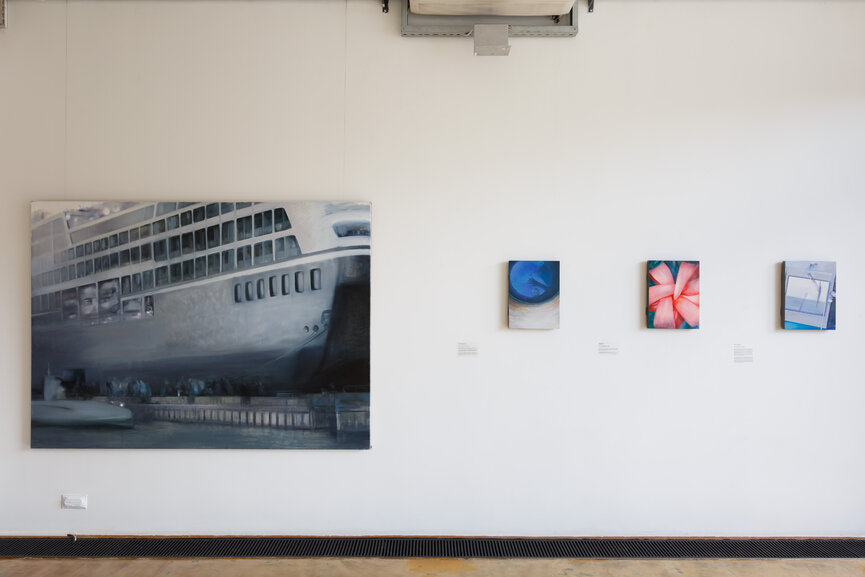 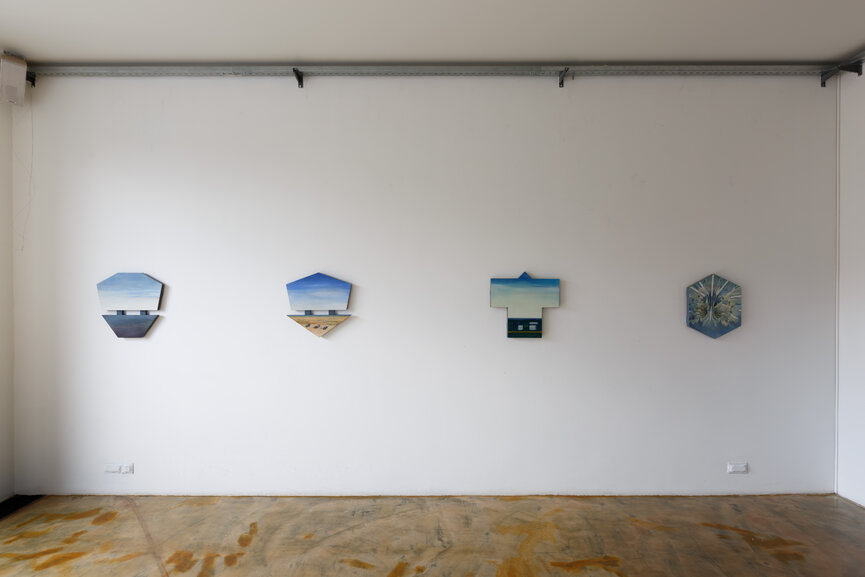 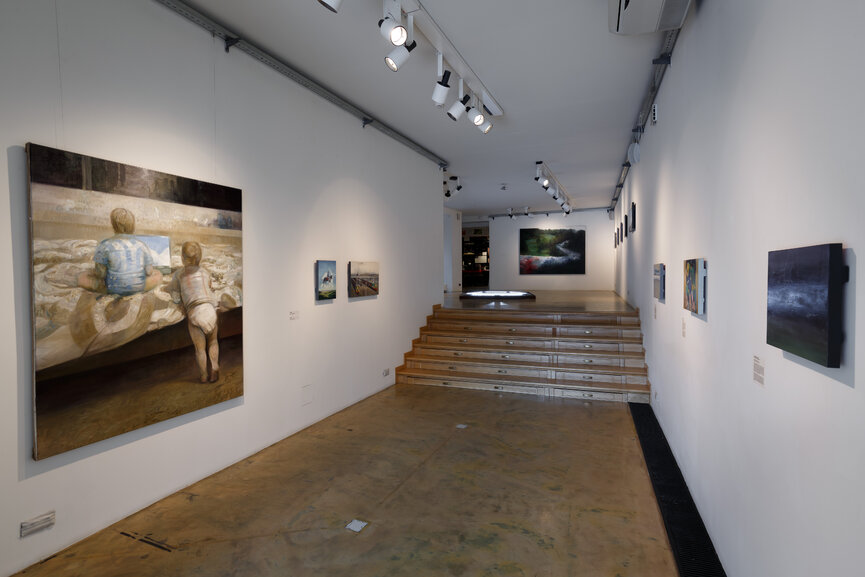 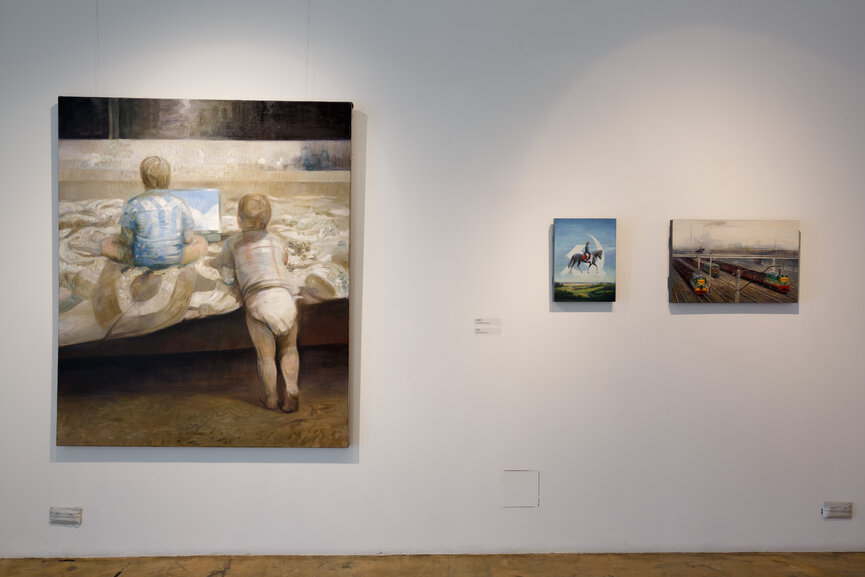 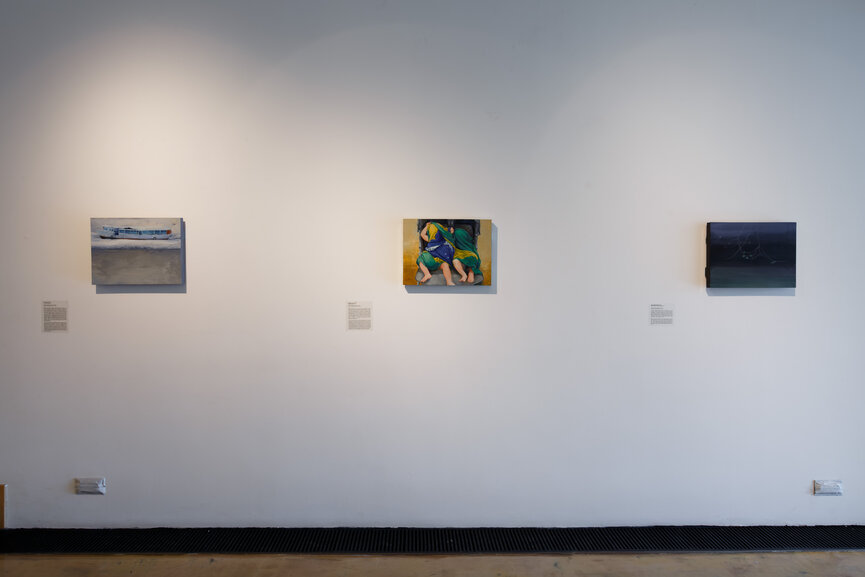 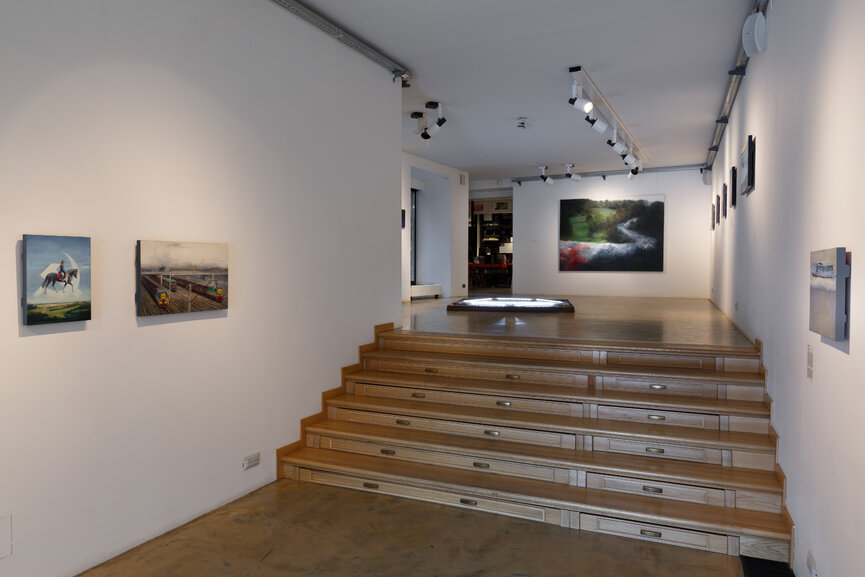 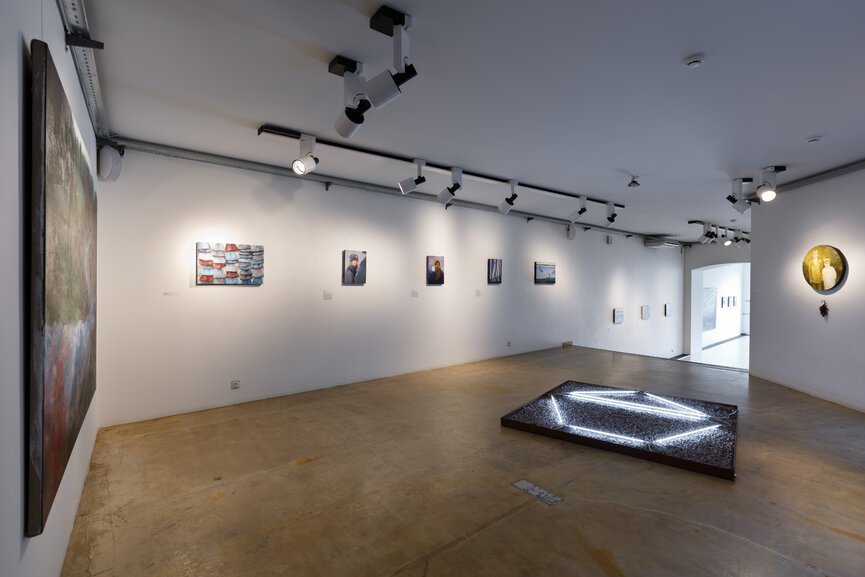 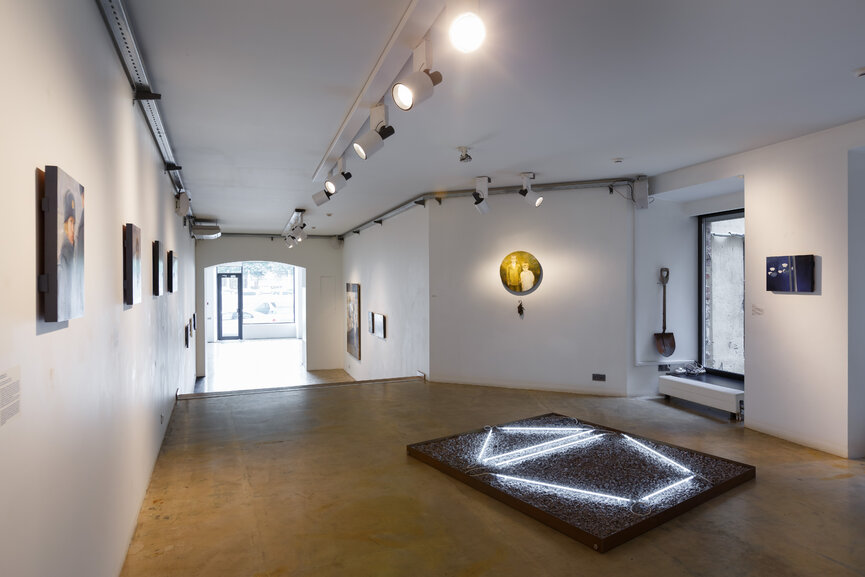 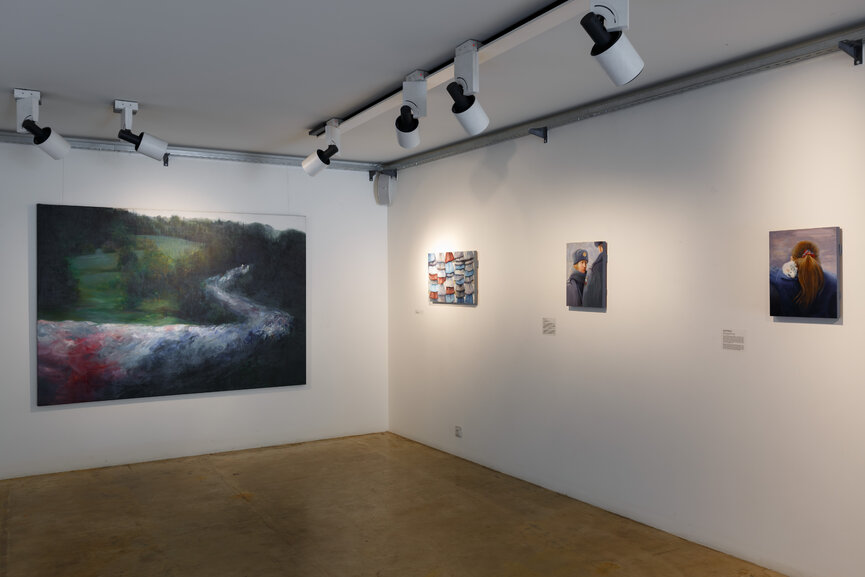