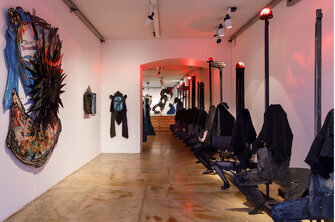 The museum and its double.

“Riverbank of Slaves” repatriates works made by the artist for the Russian pavilion at the Venice biennale in 2019, and supplements them with new items. Unlike the installation by Alexander Sokurov, Shishkin-Hokusai’s project was not shown at the Hermitage. This is understandable: the Hermitage in Shihskin-Hokusia’s version has the same relation to the museum itself as Heiner Müller’s play “The Hamlet Machine” has to Shakespeare’s original. The artist rejects the transmission of static symbols of major culture in favor of an active approach to the dramaturgy of museum display. While the official narrative of the pavilion threatened to become a memorial for high European culture, Shishkin-Hokusai’s work, especially with its new elements, seems to be a “classic on the ruins of Europe” (as Müller described Antonin Artaud’s texts in a small but powerful work of 1974).

When Artaud tried to force the theater to take viewers by the hands and join in a round dance that preceded speech, he invented the figure of the theoretical Being, “glued together from wood and fabric, assembled from pieces, not responding to anything but still causing alarm by its very nature, a being capable of returning to the stage the breath of that great metaphysical fear which lies at the basis of any ancient theater”. A great deal of art is created with the aim of causing fear, following the credo of the Old Testament prophets: if you frighten your audience with a whole list of future calamities, the attention of observers is more easily focused. It seems that the Being described in Artaud’s article “Directing and metaphysics” (1932), initially received its form not in theatre, but in art, in the famous canvas by Max Ernst “The Angel of the Home, or the Triumph of Surrealism” (1937). Shishkin-Hokusai developed his own type of alarming Beings that disarm the audience. They are (usually) nude girls drawn with several lines on plywood. They are immersed in contemplation and interaction with (sometimes) invisible companions or objects. They either draw a harsh reaction to nakedness as such, or a feeling of shame in voyeurism, causing a breakdown in erotic markers: their poses and activities contain no hint of the act of seduction. The successors of the girls of the American outsider artist Henri Darger, the maidens of the surrealist Paul Delvaux and the heroines of Hayao Miyazaki, they act in such a way to stop all other movements and motivations around them. In the project for the Russian pavilion, they are located in the space of rich Dutch still lifes. As a decoration for their inaction, food becomes the metaphysical landscape, calories disappear like smoke, and the frames, on the contrary, swell from the additional sprouts, branches and trunks.

If the grotesque reading of museum conventions were only limited to swollen frames, Shishkin-Hokusai’s project would be a mere commentary on the role of the surrounding stage in a theatrical production. But the dramaturgy here is more complex. To understand it, we will make a short digression. On the 21st of April 2021, the artist Olga Grotova made a series of photographs of the Winter Palace. On the perimeter of the green zone that borders Nevsky Prospekt and the Palace Embankment, OMON fighters stood in intervals that resembled the arrangement of allegorical figures on the roof of the Venetian library of St. Mark. The photographs published in Instagram stories had an amazing wealth of historical references. They contained reminders, of course, of the capture of the Winter Palace by the Bolsheviks, and the majestic history of national museums. Carol Duncan in the monograph “Civilizing Rituals” writes that control of museums is about controlling the representation of the community and the position of its members in relation to the highest truths and values. “The museum ritual asserts and highly values the identity (sexual, racial etc.) of those of us who are capable of taking into account the diverse rules and hints most sensitively,” Duncan notes. The matrix of control over public spaces in buildings and on the street in Russia are organized in a different way than they are in western museums, as Duncan sees it. The museum does not assert identity in favor of those who are faithful to the ritual of presence. It rather throws society back into rituals of the past, and gives the right to behavioral and aesthetic atavisms. When at crisis moments, mechanisms of inner and outer control merge, it becomes clear how atavisms of a similar type actively construct our political present. If Artaud’s Being had gone for a walk along the Palace embankment on that day, no one would have noticed it. Artaud, who was tormented by war and psychiatrists, understood this when he wrote in the foreword to his collected works (1946) that freedom “is just a cliché’. It is “more agonizing than slavery” and cruelty is simply an “idea in practice”.

Contemplating these atavisms, Shishkin-Hokusai uses several methods. He shuffles compositional schemes of imperial imagery (frames, cartouches, classical poses and groups), returning them to the state of a sketch. Depriving allegories and plant symbolism of the triumph of asserting geopolitical victories, the artist uses them as a frame for 3D-videos, where the statues are covered in pink liquid (in bloody sweat caused by stress?) Shishkin-Hokusai sees “living machines” in works of art. The work is born from the organics of the view and desire, remaining a product of technical thought, of completion. Here Shishkin-Hokusai enters into a dialogue with the theatre of the avant-garde, searching for methods to introduce the machine of logic into action and scenography. A conceptually similar predecessor to the artist’s efforts in this direction is the biomechanics of Meyerhold, and iconographically the artist’s construction resembles the sketches of the Italian futurist Fortunato Depero for the unperformed production of “The Nightingale’s Song” by Stravinsky for Diaghilev’s Ballets Russes (1916). If Depero “concentrates on people’s abilities to merge with the mechanical nature of the new world,” as a modern researcher writes, the characters in Shishkin-Hokusai’s videos no longer need blades and gears to resemble automatons.

The kinetic crowd of viewers also resemble “living machines” in the artist’s work. In the installation for the Russian pavilion, they competed in mechanical jumps, in order to “touch masterpieces” with a glance. “Riverbank of Slaves” deprives viewers of a link with the object that is viewed, and the jumps deprive them of the excitement of a competition. The Hermitage machine is dismantled into parts, and in the ritual unity of viewers with the paintings, lacunae appear. They are filled by a series of uncharacteristically blue sculptures, which seem to be a response to the calls for decolonization of national museums. Portraits of female models from South East Asia and Africa are displayed with anthropomorphic bags tied up with ropes. But the story of these items is not a battle with forced exoticization. It is another consideration of the position of “living machines”, whether they are servants as robots, or overseers of the ideals of communities. Is a “museum of cruelty” possible, in which pictures are free from consumer reflex, from the status of inviolable treasures, and from evidence in studying the manipulation of power? And what needs to be freed most of all, the viewer or the work? To find answers to these questions, Shishkin-Hokusai translates the museum ritual into his own language and discusses all the components of the process of interaction with art in one breath, practically in one line. This is the topography of ruins of our personal private Europe. A study in the form of a theatrical performance, where different forms of beauty are adjusted by tools of coercion – and vice versa. If cruelty is an idea in practice, then the ambiguity of an image, i.e. potential without realization, is the basis of the museum of cruelty. 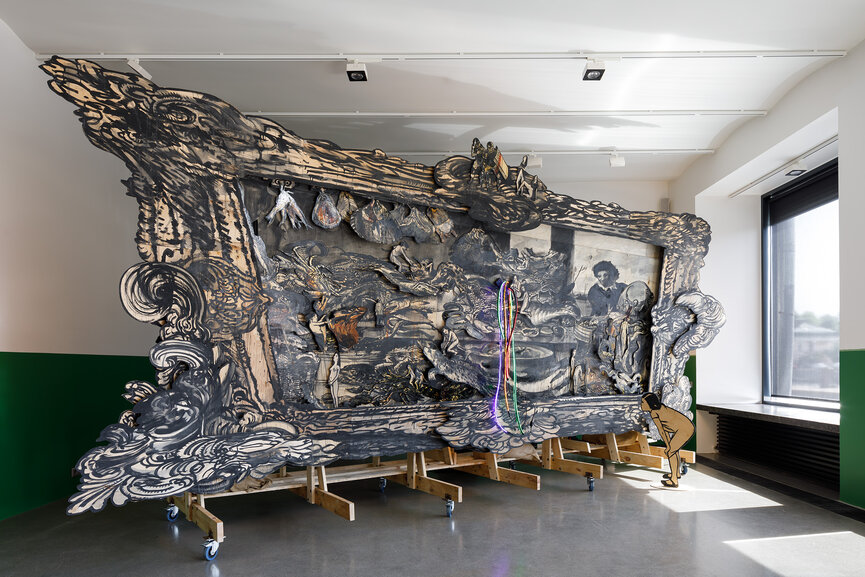 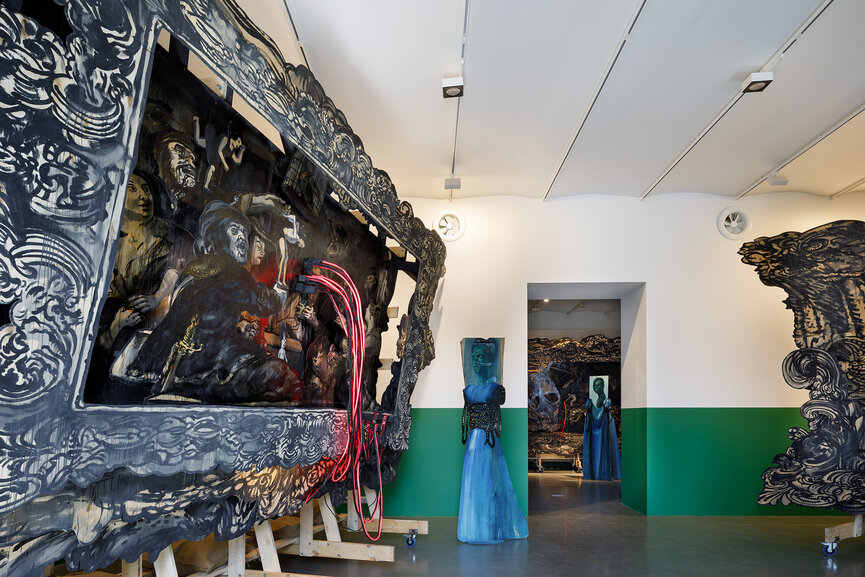 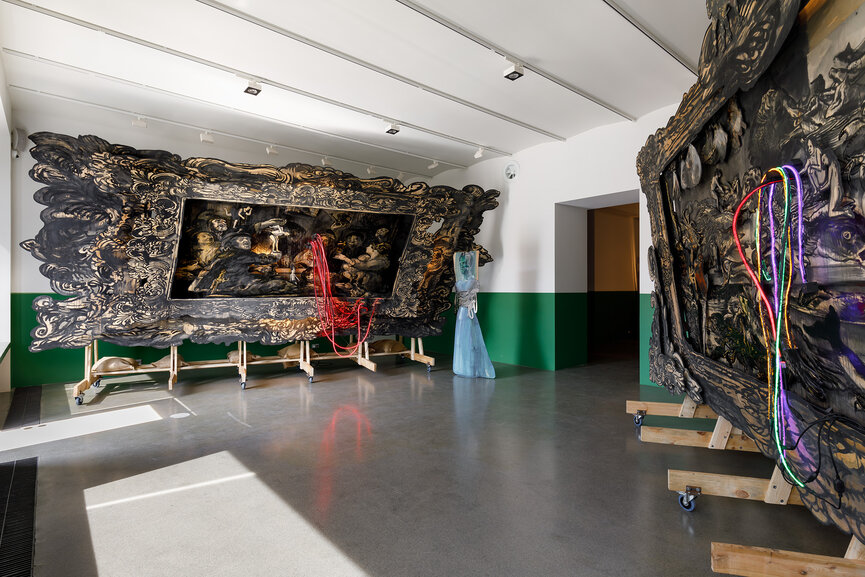 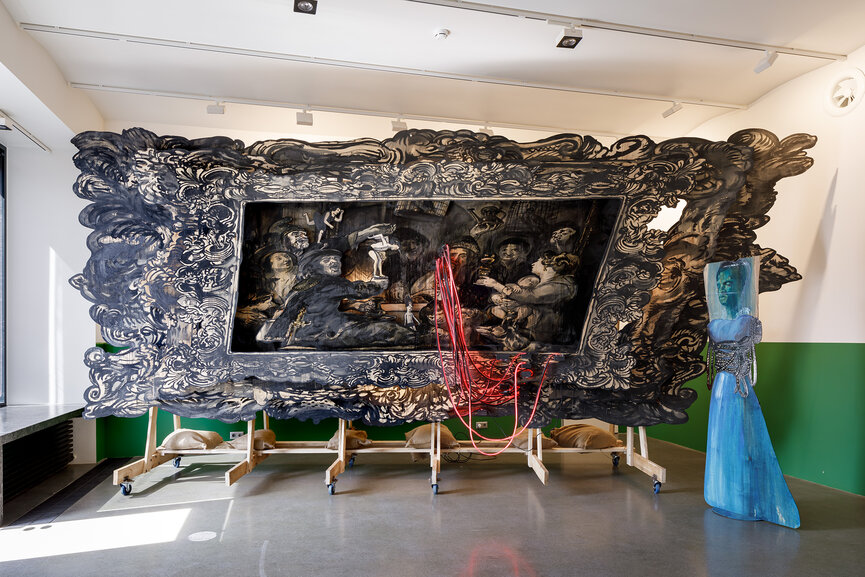 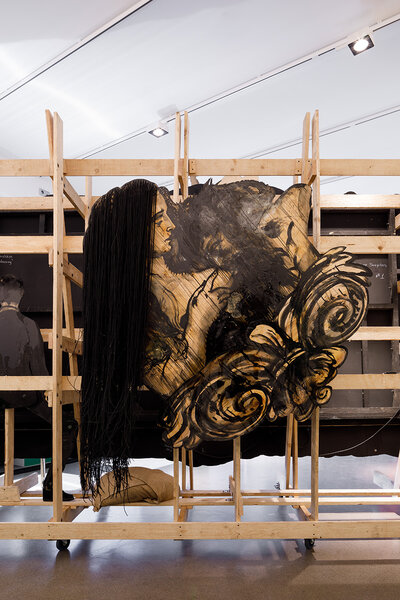 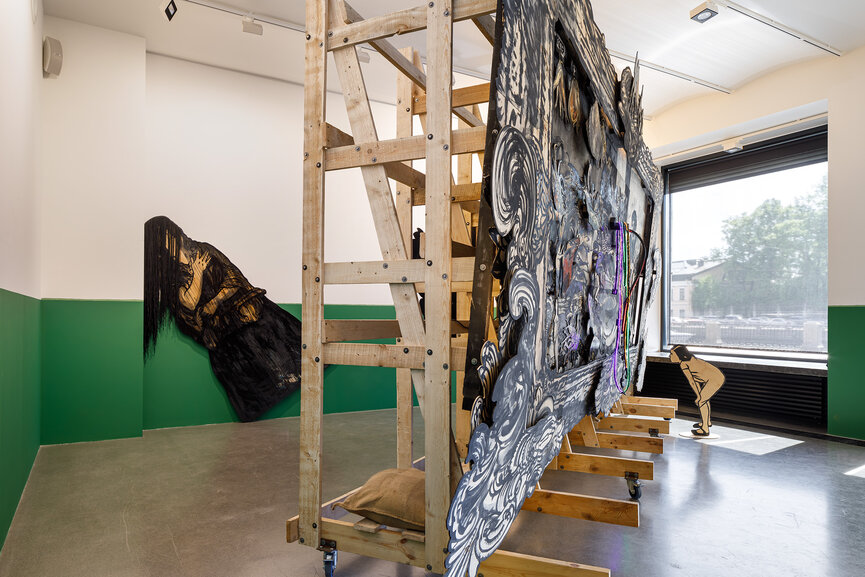 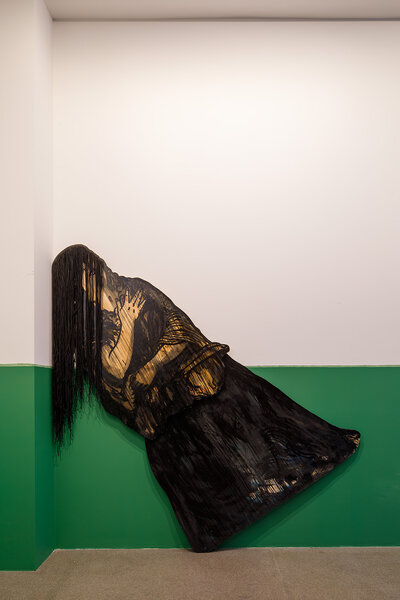 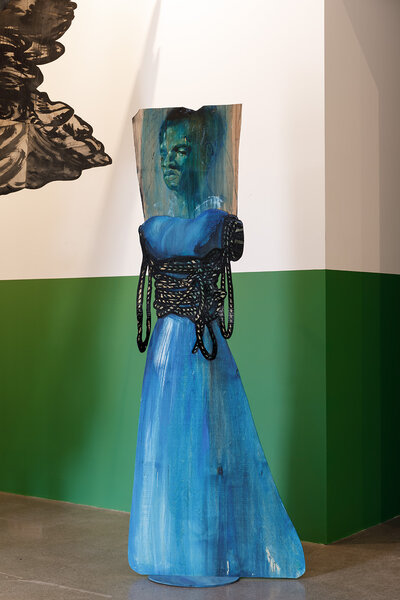 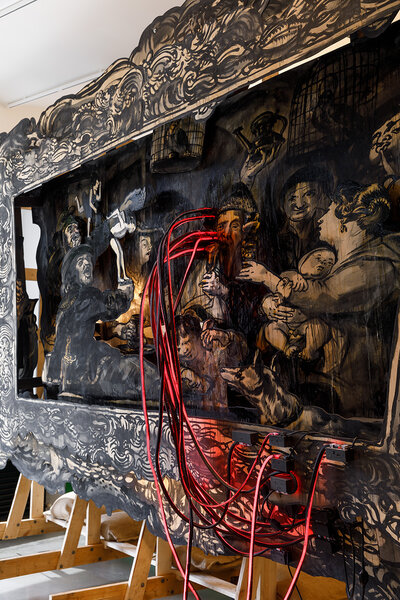 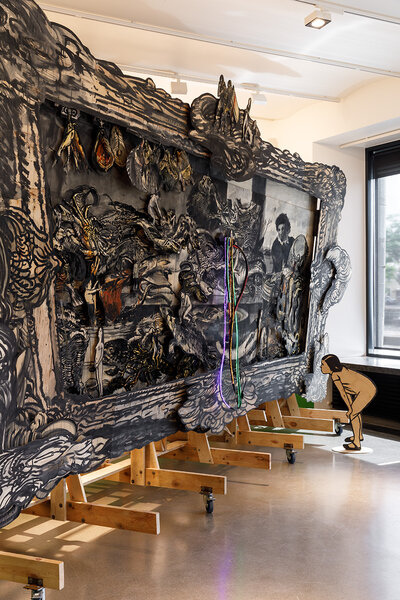 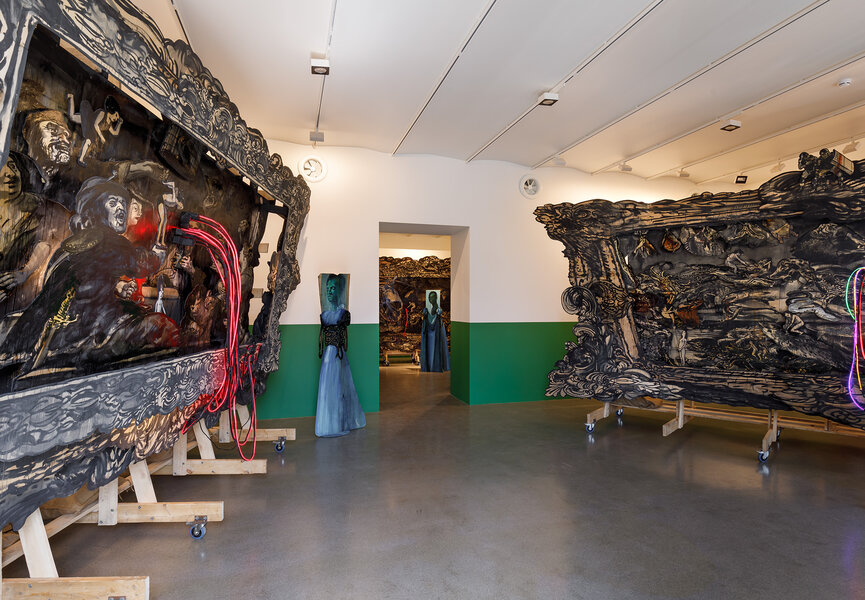 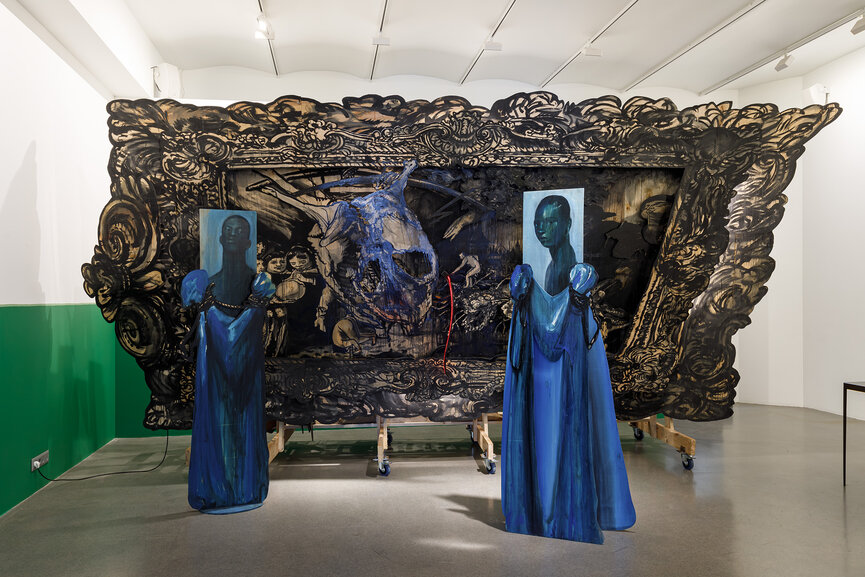 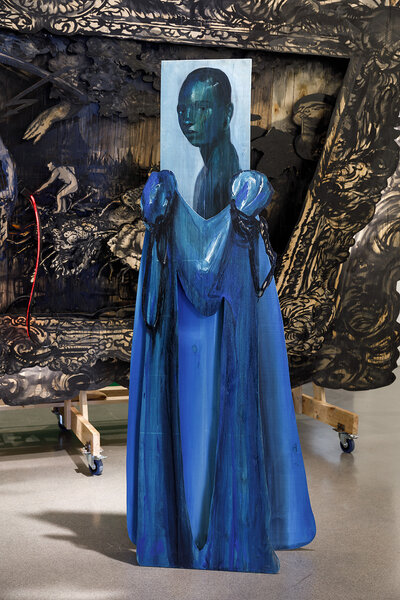 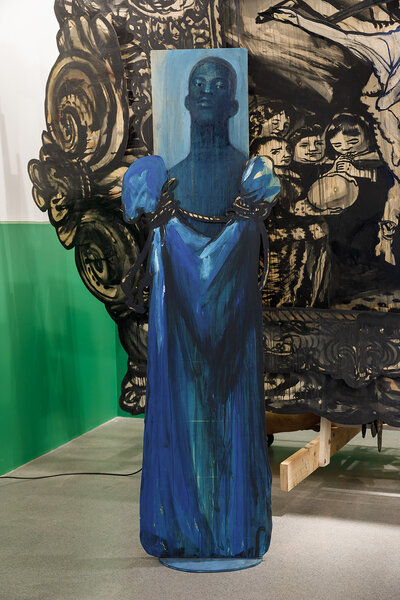 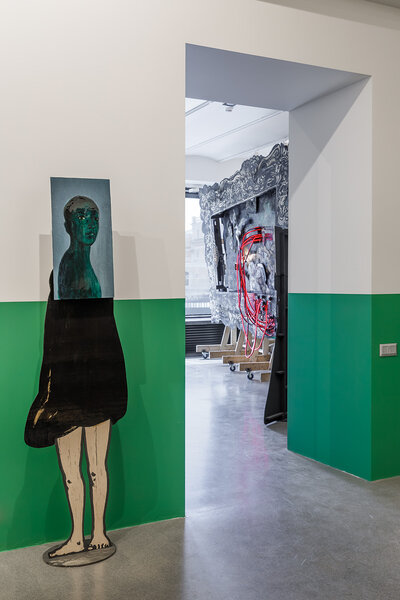 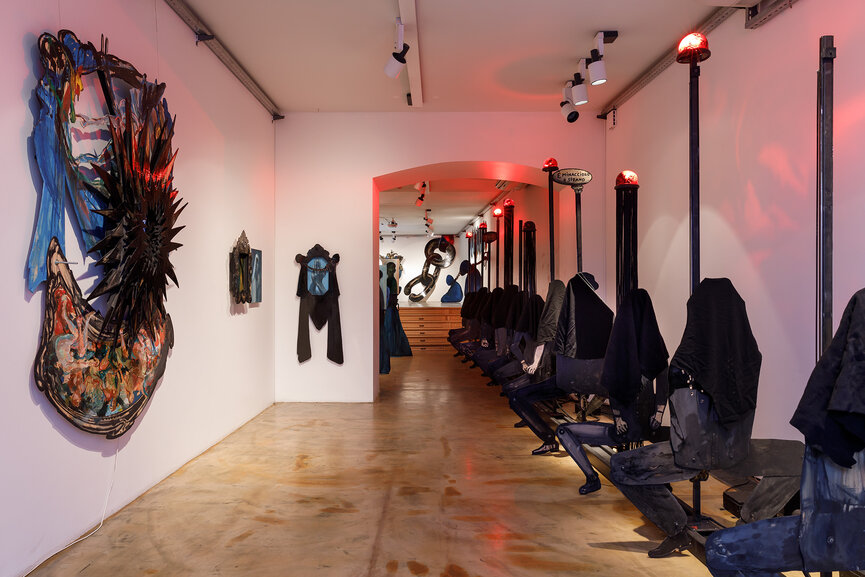 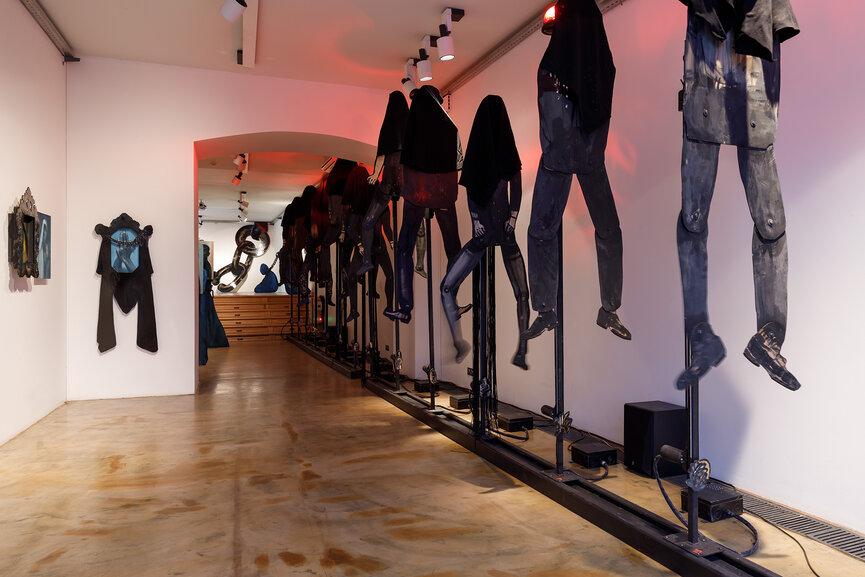 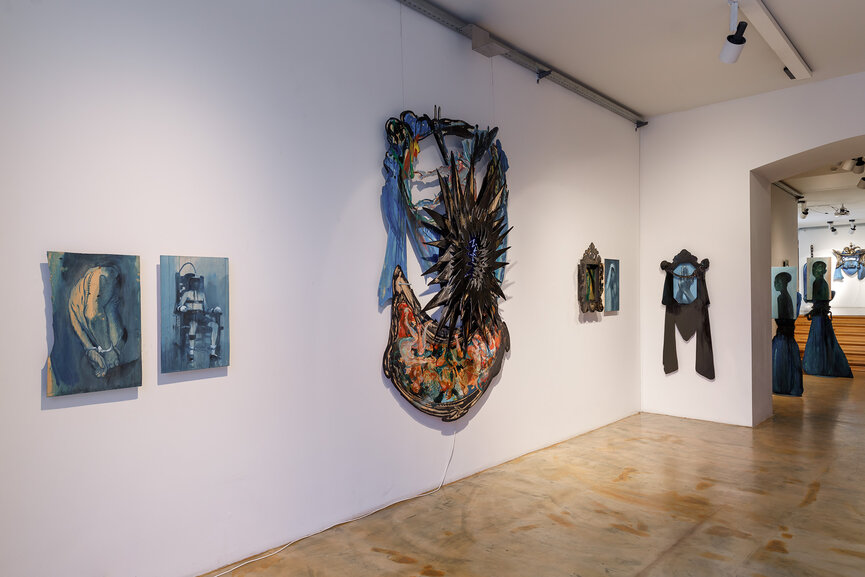 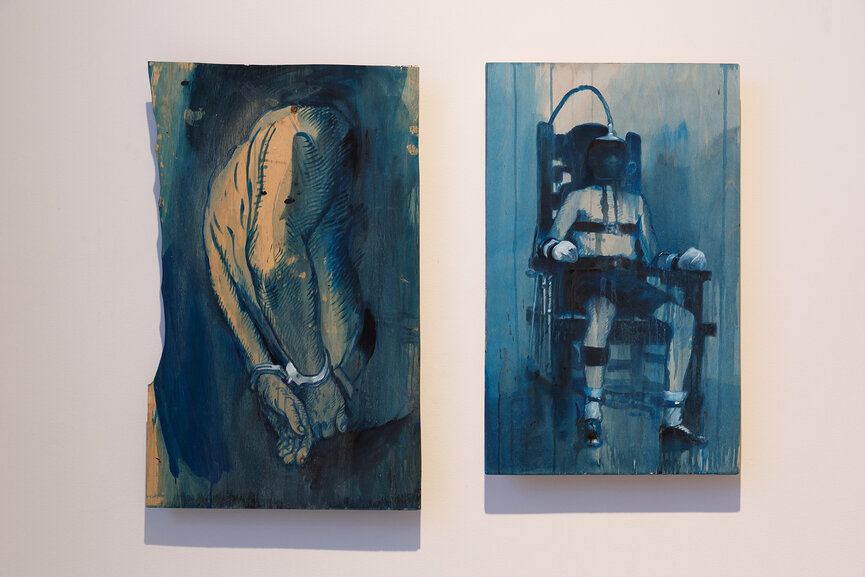 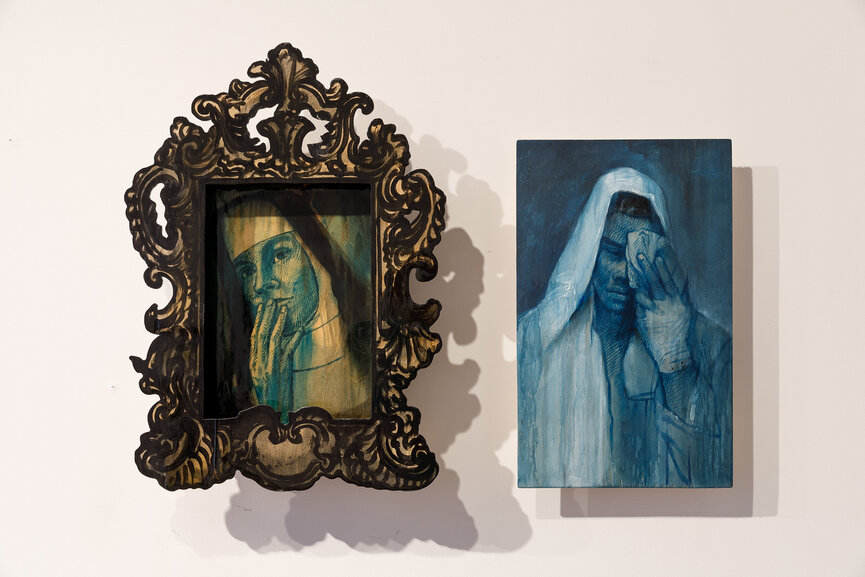 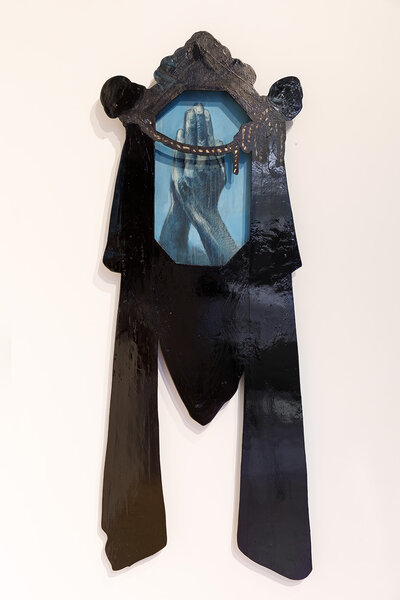 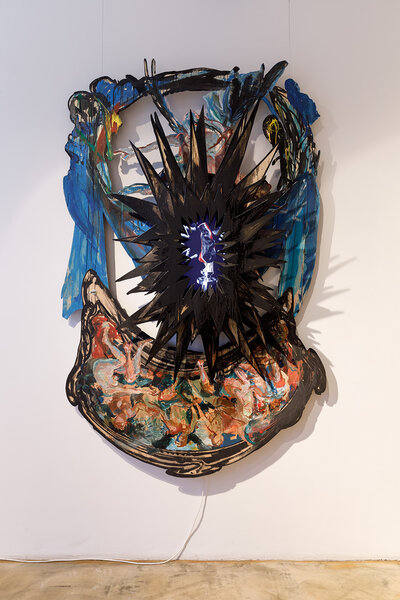 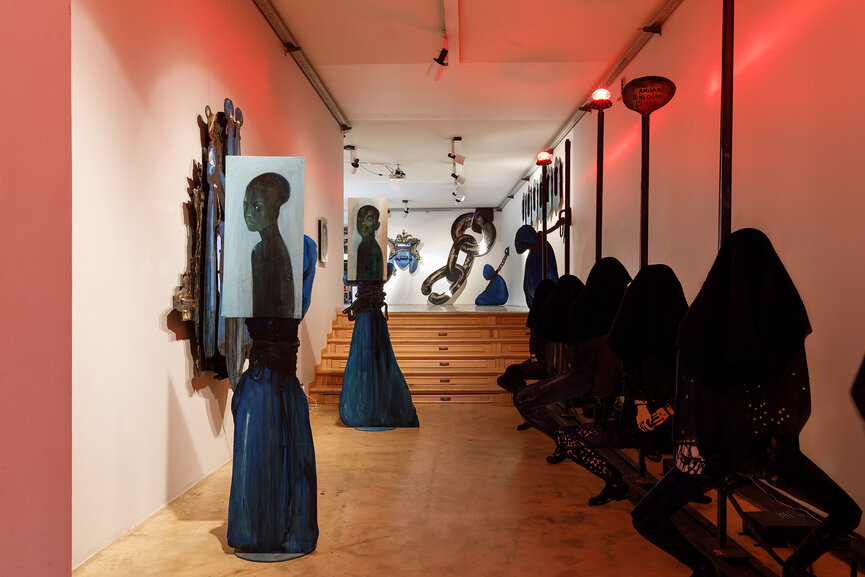 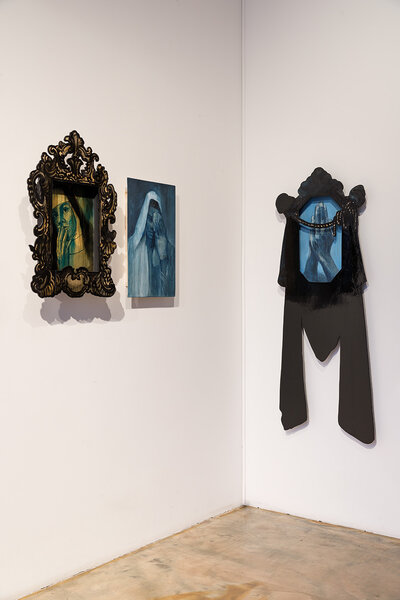 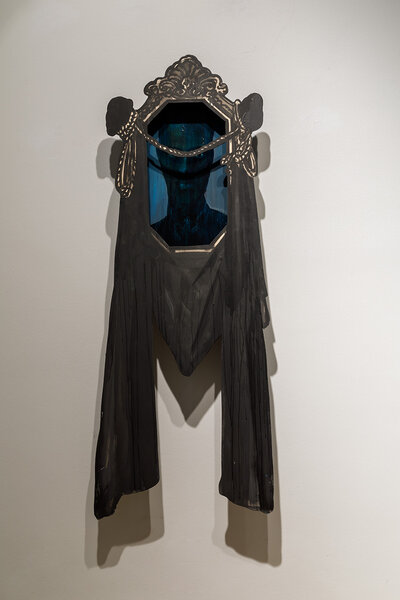 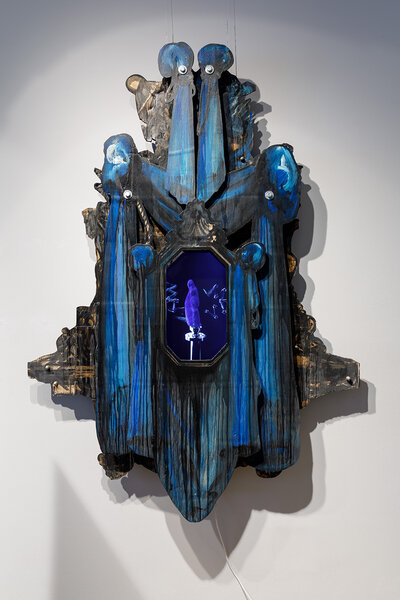 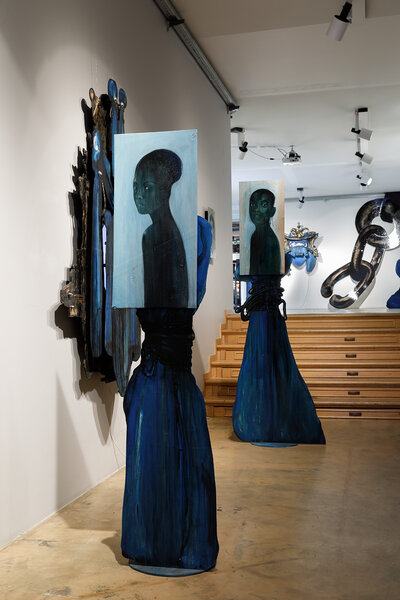 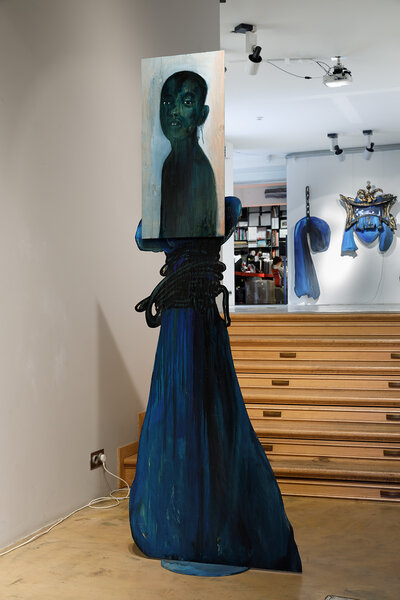 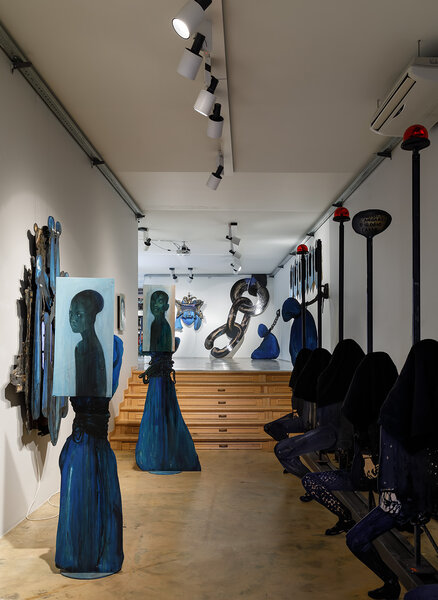