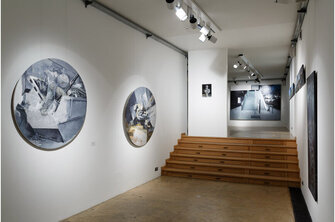 The spectre of grand style is haunting Russian modern art. The desire to talk with grandeur, confidence and thoroughness of old masters is high in contemporary times. It is not working out, though. "Wise, good, eternal" is appropriated, instrumentilized and made to serve populist needs of the government, while the artist, who speaks about the imperishable in a straightforward manner, is repressed by the conceptualist discourse and can’t yet be rehabilitated. However, Vitaly Pushnitsky manages to remain provocatively serious over the years without becoming an object of ridicule. With his apparent attention to political, social, historical, and mass media reality, the artist has occupied the territory of ontology. Nevertheless, it hasn’t added much confidence and grandeur.

The works at this exhibition are heterogeneous with regard to their themes and forms - they follow already exhibited series: Точки (Points), No man’s land, Выход (Exit), Ожидание (Expectation). The source material is very simple, most basic, biographical. Here is a photo from the family archive, this is a shot from a programme that was watched once, these are the interiors of the downfallen SPA Signal where the sensational exhibition of the same name took place, that’s a container for huge construction waste (the artist is currently doing repairs), as well as showcases, attractions, sculpture, still lifes seen during trips, and the workshop. However, the randomness of sketches and photographs, their spontaneous selection, this flickering reclassification of recent impressions, having bogged down in paintings, acquired a somewhat strange solemnity.

Pushnitsky's canvases always tell a story of confrontation. Visual, narrative efforts run up against auto-aggressive gestures such as washing off, polishing out, ripping off, gluing up, painting over. Colour is overlapped by a monochrome layer. The three-dimensional illusory space is anulled by alien flat colourful piles. Statements are interrupted in mid-sentence, shout over each other. There are two conflicting feelings – the need to speak with extreme seriousness, and disappointment in the possibility of such speaking; layer upon layer they form the materiality of the painting.

Vitaly's recent works have accumulated a collective feeling of a drawn out ending of the historical period and the heavy anticipations associated with it. The epoch is still sparkling mechanically like a merry-go-round forgotten in the night, but its days are already numbered. However, the agonizing, nervously shuddering, agenda-tied waiting contradicts Pushnitsky's ethics.

In order not to stray from the stately mournful ecclesiastical tread, the artist dissolves personal time in the big historical one. Along with the feeling of the unprecedentedness of the current moment, hopelessness disappears. Vitaly doesn’t talk about aspirations, hopes, fears, or forecasts. His expectation is of completely different kind. Pushnitsky believes that being emotionlessly conscious about the inevitable end is a remedy for general (natural) apathy and anxiety. A skeleton on a bench by a dried-up pond, a skull on a fragment of a baroque crucifix, a skull forgotten on a desk indicate the result and limit of all expectations. Contemplation of the latter builds up immunity to stories from newsfeed. This is the only thing worth courageously and consciously doing before the inevitable result that awaits every person. Vitaly opposes the purifying work of death to the neurotic synchronization of clocks, the painful wavering between the era that comes to an end and the obviously uncomfortable tomorrow. Death sets apart, monumentalizes, fills with grandeur and meaning every moment before her arrival, she places it on an epic scale. This is not an itchy hope of predicting the future and adjusting to its needs but a firm consciousness of the inevitability of the end that gives the artist a resource of seriousness, allows him to speak on huge, incredibly huge topics. 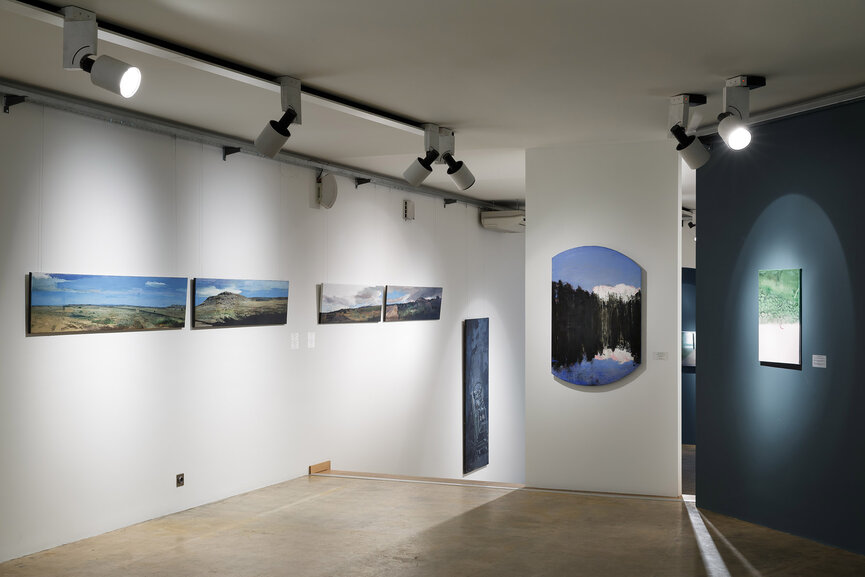 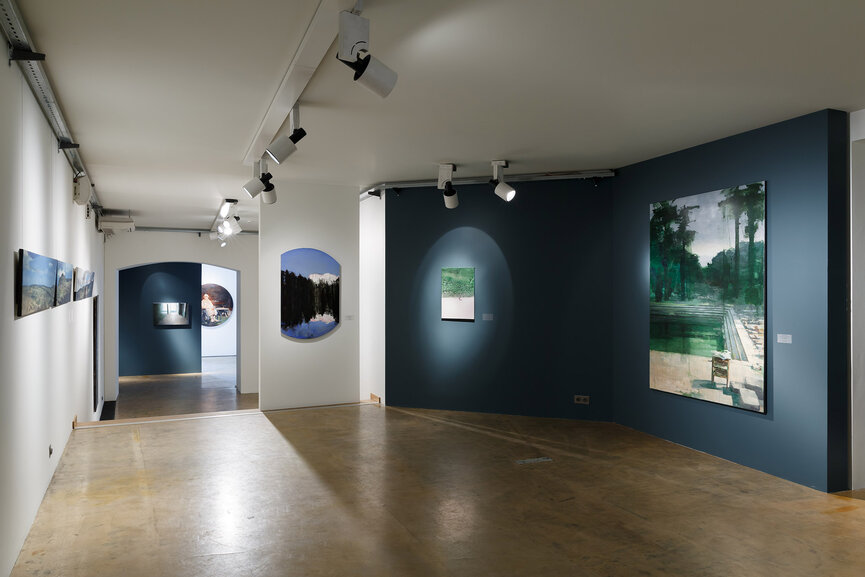 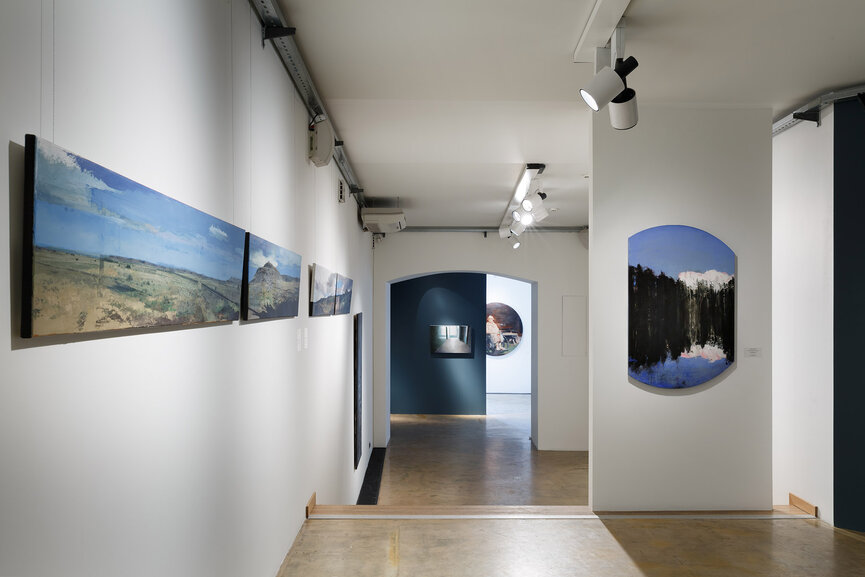 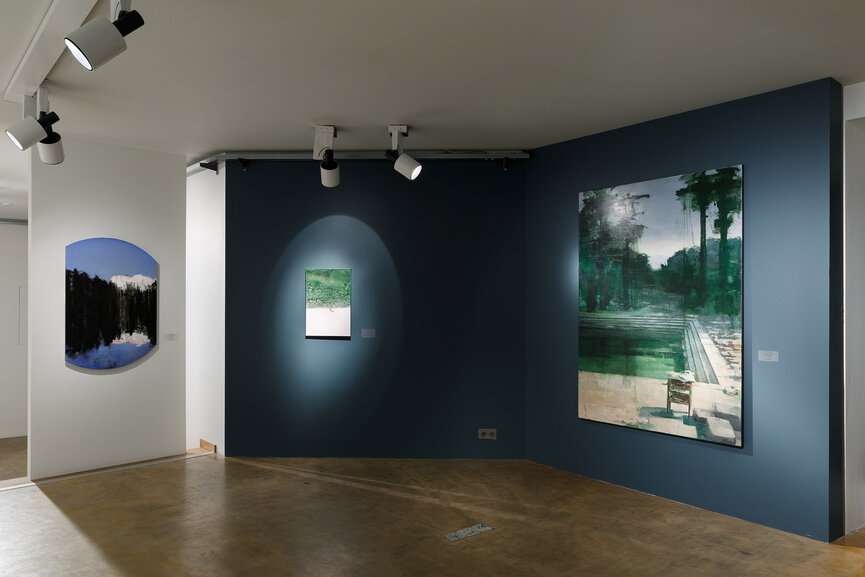 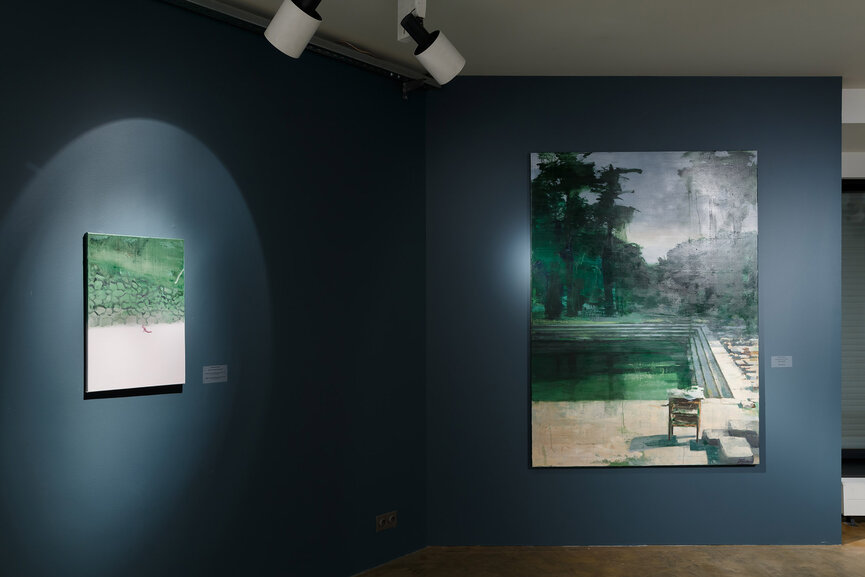 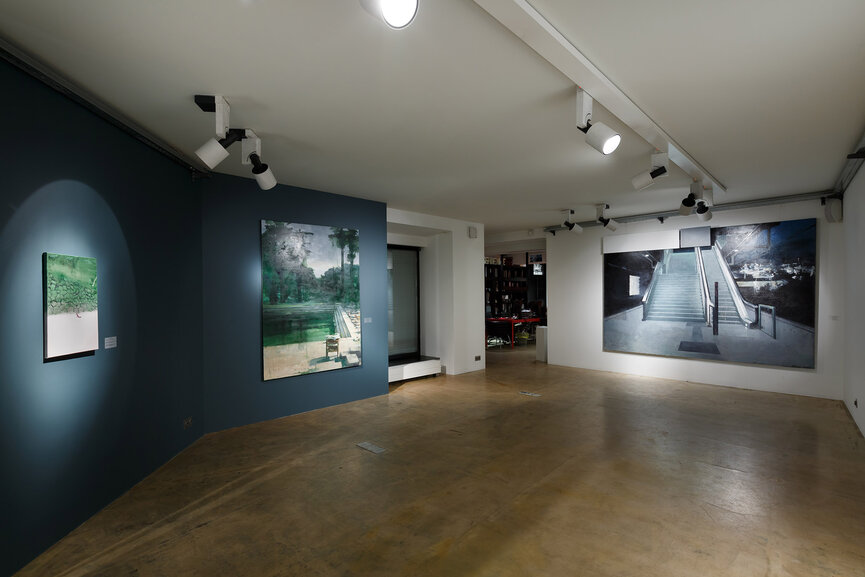 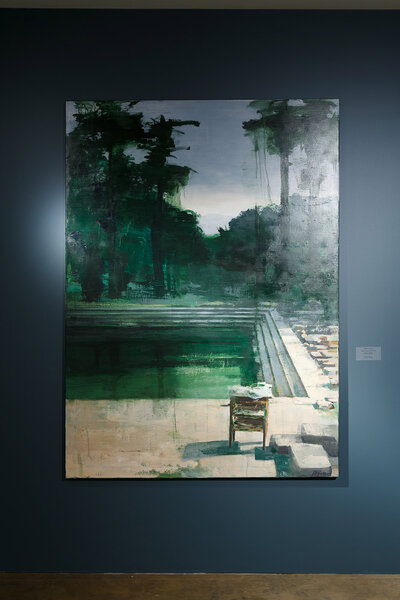 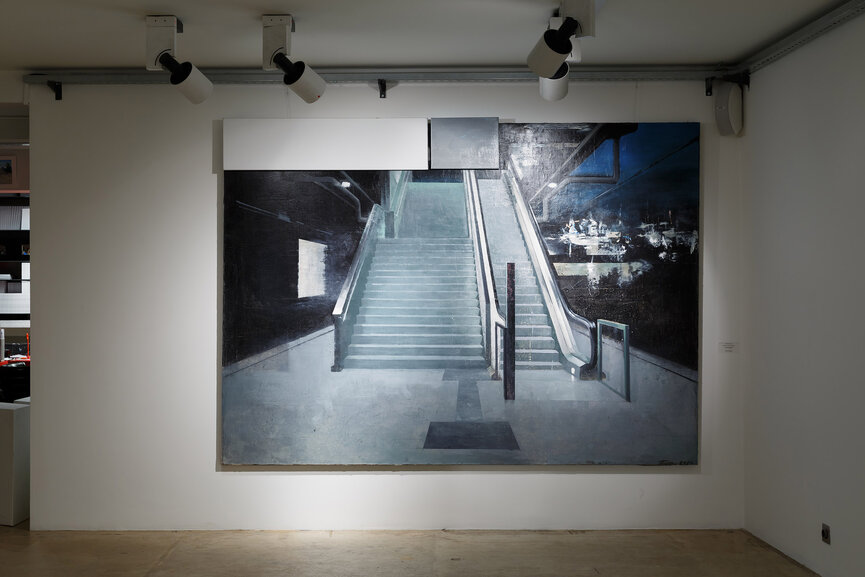 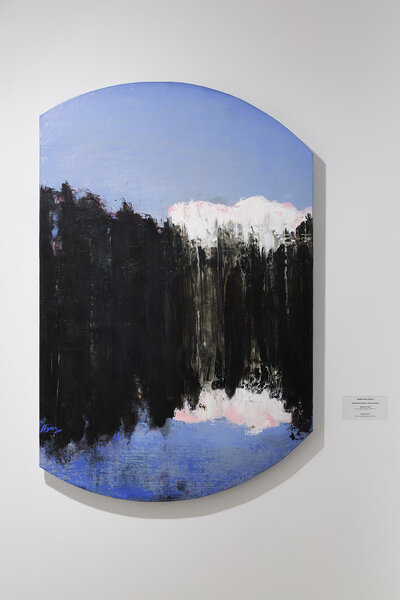 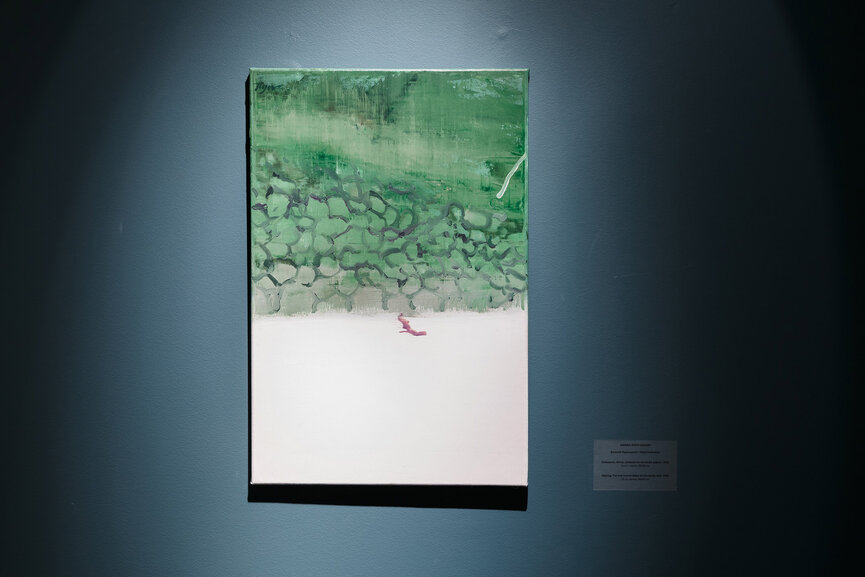 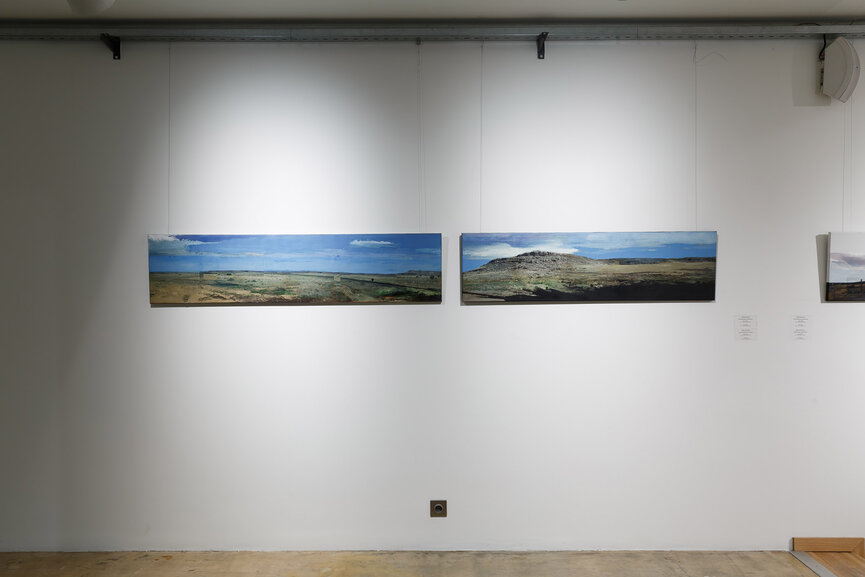 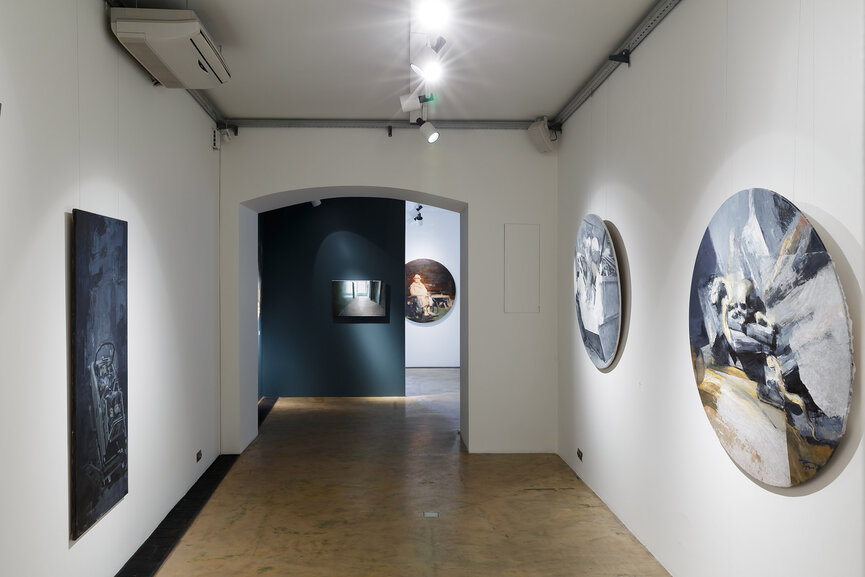 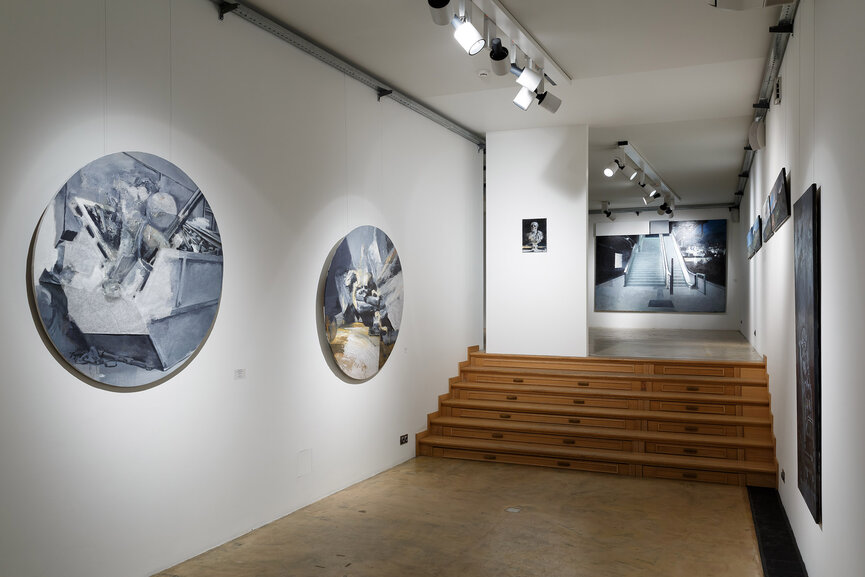 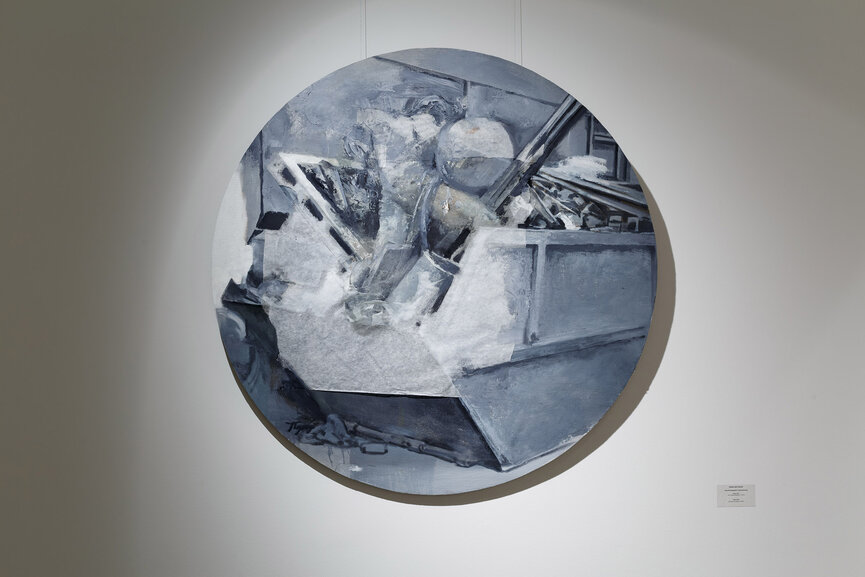 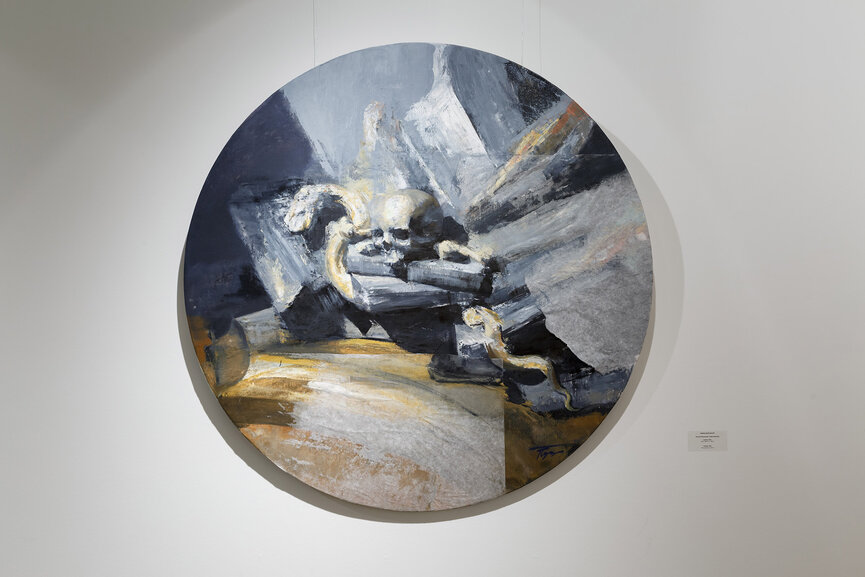 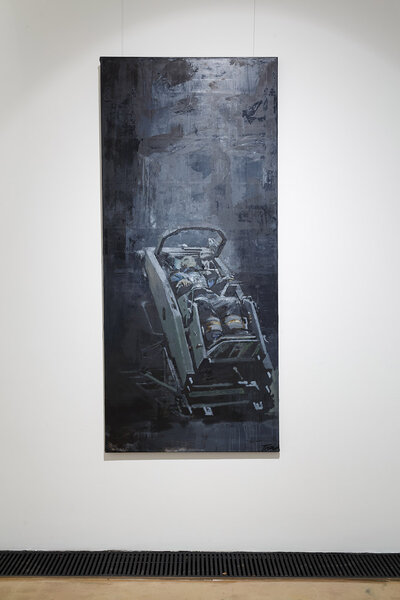 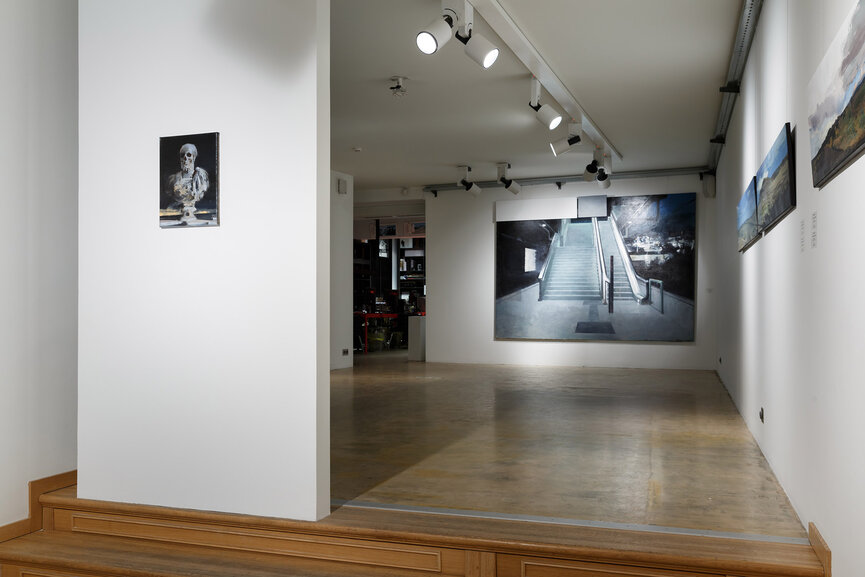 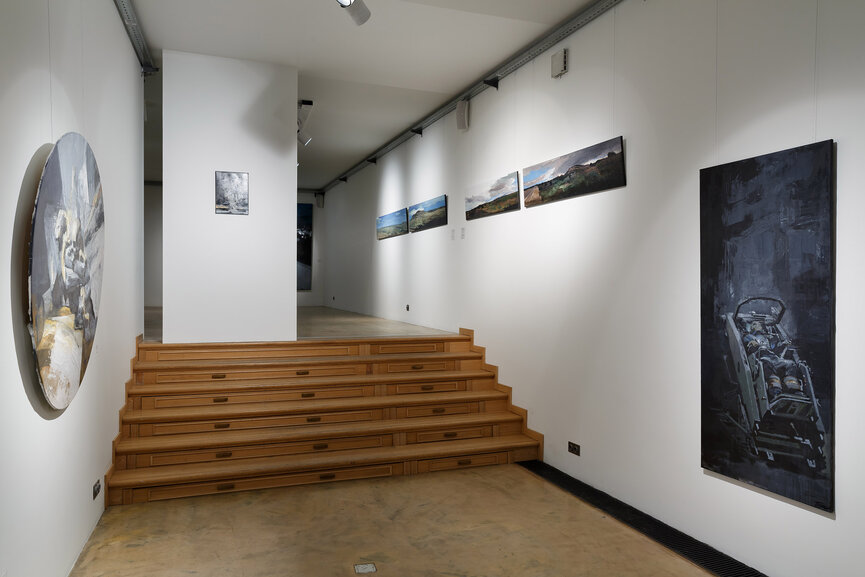 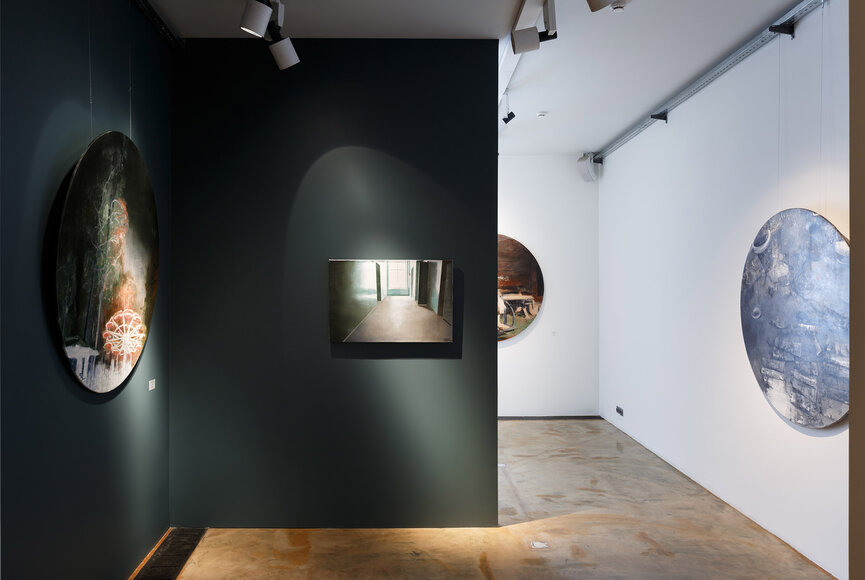 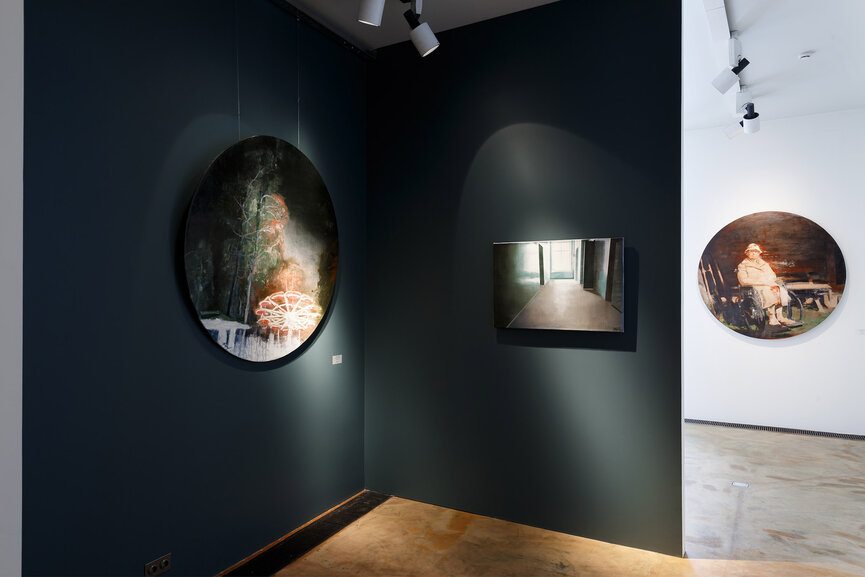 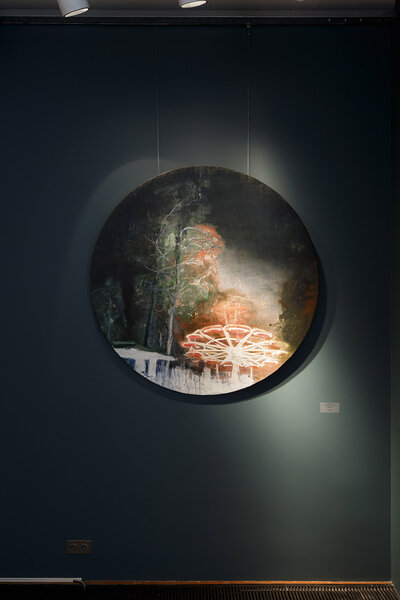 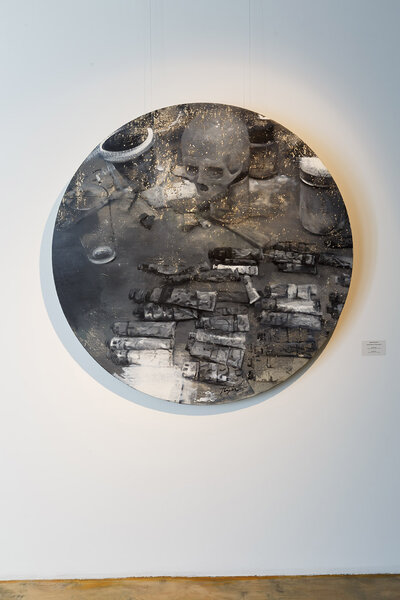 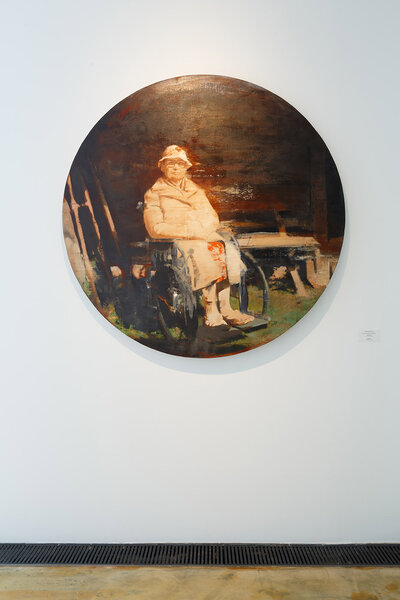 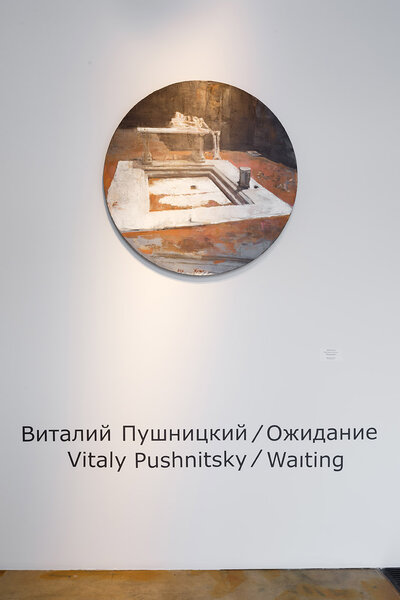 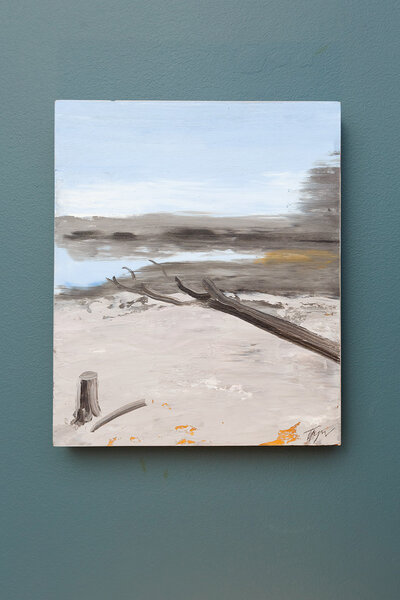 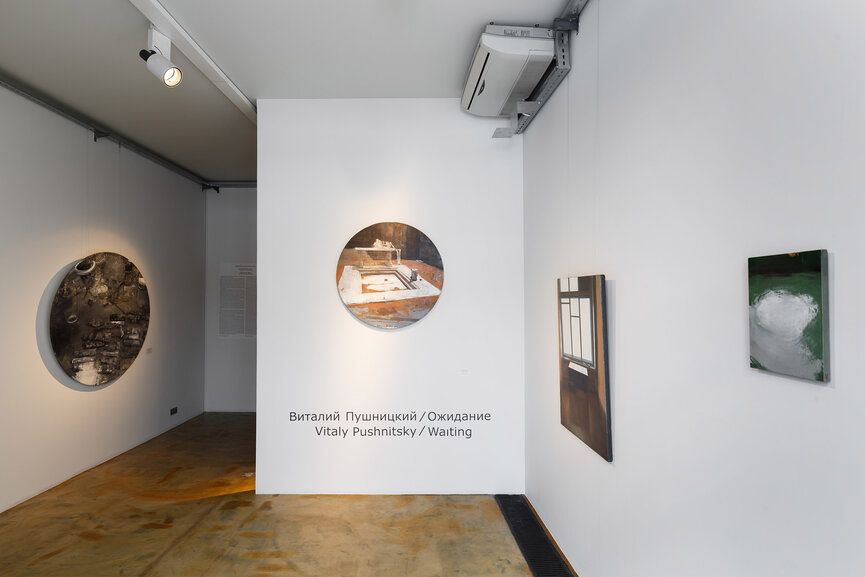 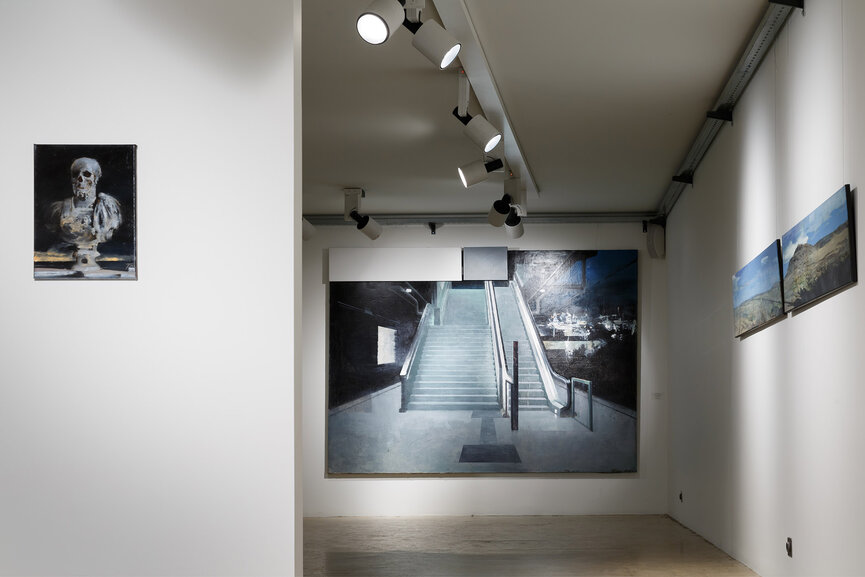