...Things are genuine when they have an authentic purpose. They are conglomerations and precise material representations of the time when they were created (in style, design, and character).

They are an exact piece of reality, proving that time leaves its mark. For me, a thing itself represents absolute reality, as opposed to images of a thing, which always take second place in relation to the real thing.

It was the combination of these broken fragments of reality with their relative meaning and imagery and their way of interacting with a person that piqued my interest and made me begin a series of objects — anti-casements — where text gives way to the text, the object and the space of things, as well as their materiality. When we separate out part of an object, we forfeit its function and turn it into a detail in the puzzle of reality, bringing it to the maximum size that fits this series. This part of the door is the handle, this part is the latch, that part is the keyhole, and all of it part of the same object, deconstructed and reconstructed as a separate work. A chunk is torn out of reality — a fragment, piece, or shred of it — and reality suffers a loss.

The concept of antiwindowsallows using any material that the artist is able to gnaw off of the world. The numeric values used on these antiwindows add an element of objectification. These are not inventory numbers, or sequential numbers. These are signs that are ambiguously tied in, relating the nature or form of the object fragment.

The three-dimensionality of a thing is emphasized by movable joints: hinges with the presumed purpose of representing the same thing in two dimensions. The concept of anti-windows likewise restricts the color spectrum used for the object or its environment. The small windows don't have a picturesque background in a harmonious combination of colors — here the color is nominal and invokes a monosyllabic interpretation of the object's color values… 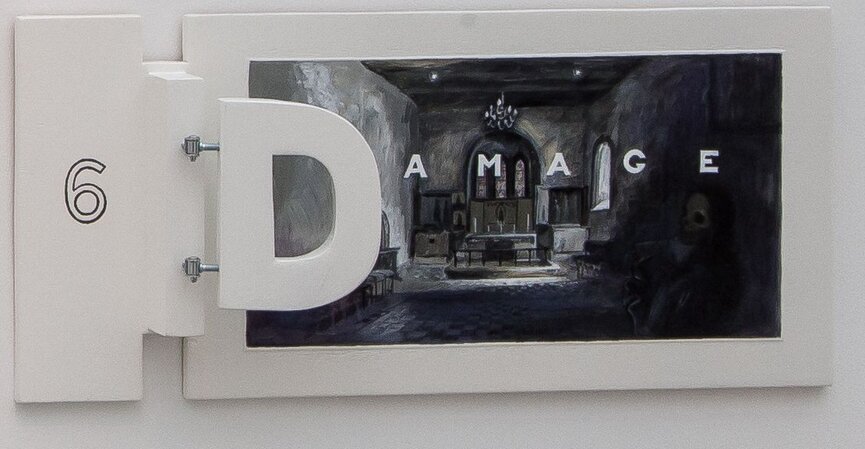 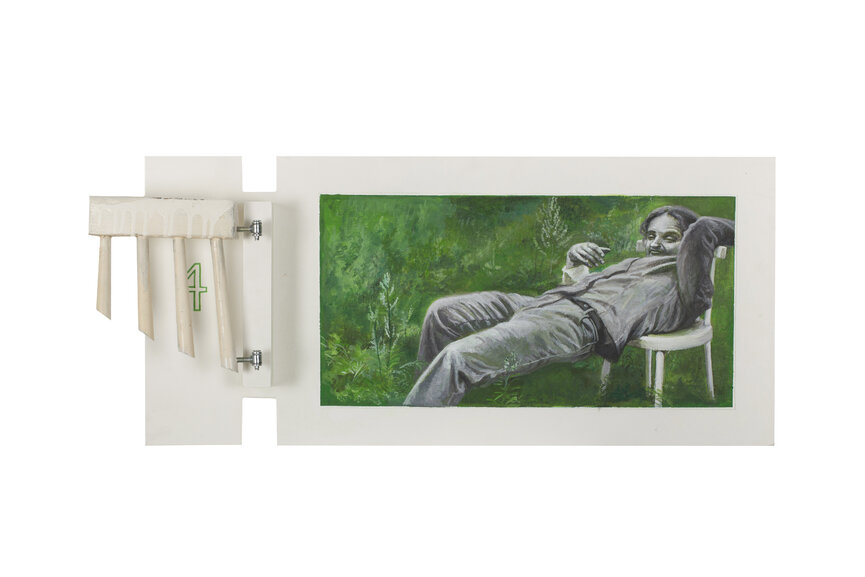 “The art of Semyon Motolyanets is a conflict. A conflict between the artist’s reflexes and his ratio (“reason”). With a traditional fine arts education behind him, the painter is not able to control himself. He feels the first impulse to create something and unintentionally paints in the way he was taught. The next moment is an involuntary reaction to how it turned out: “God, what a vulgar sunset I’ve made!” The texts are the artist’s voice of reason, encumbered with postmodernist consciousness. What was beautiful in Kant has turned trivial. Traditional painting is not comme il faut.

The irony on the subject of generally accepted and well-established rules of the game in the capitalistic art world – big paintings solve big problems – looks like a form of protection, of self-identification and to some extent even resistance to evil, but it is also the pursuit of truth, lost in a vast field of illusions”. 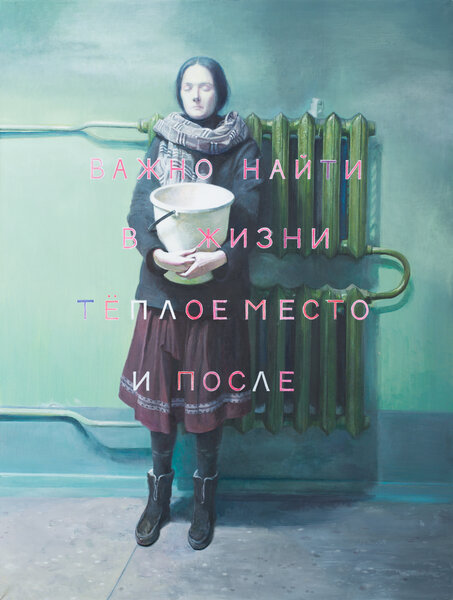 The main thing in life is to find a warm place, and then... 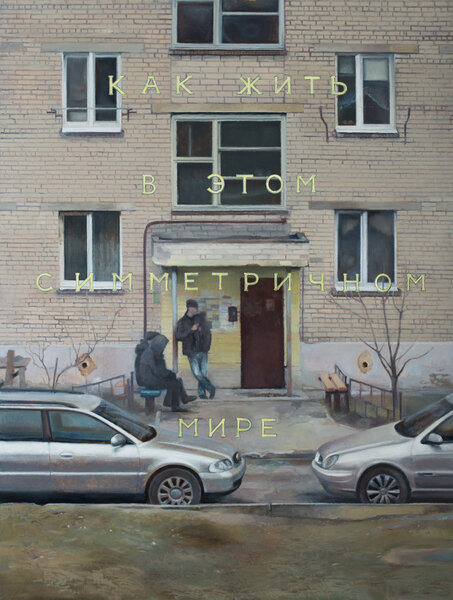 How to live in this symmetrical world 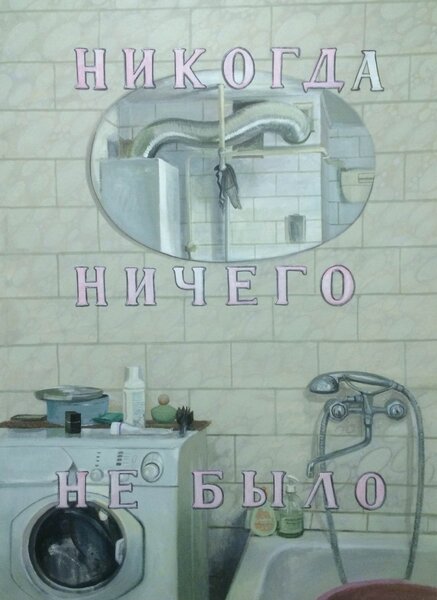 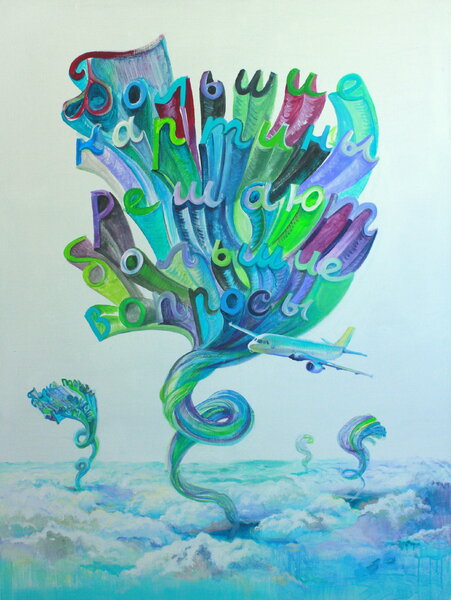 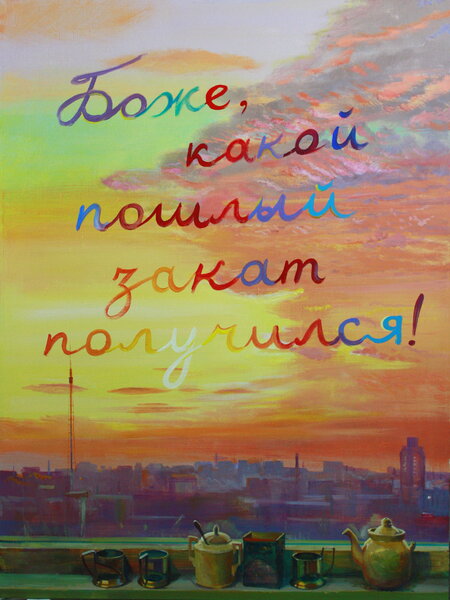 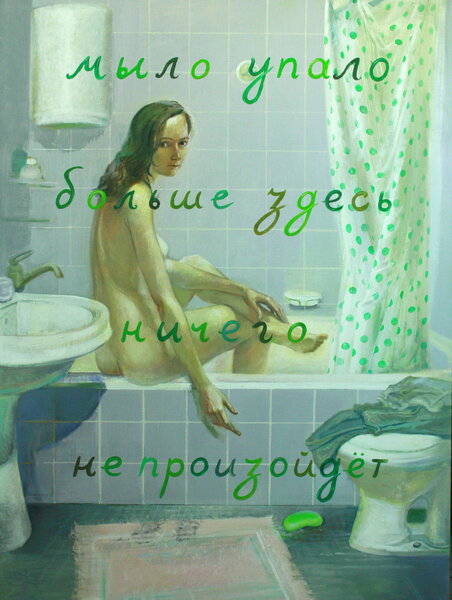 The soap has fallen 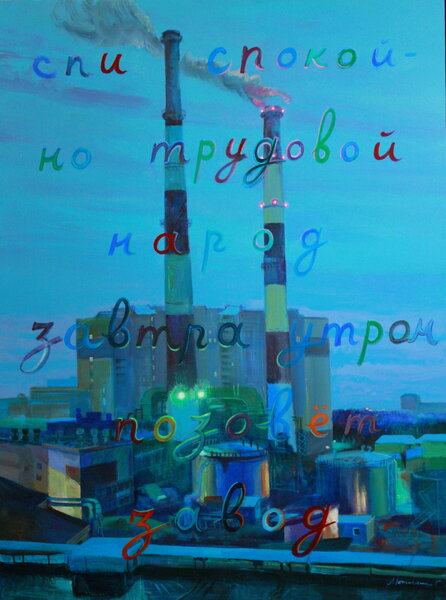 It’s better to work not a day in life, than to work all life

Observing how beauty is produced in work interiors has evolved into a full-scale visual study for me. The embellishments that workers add in their spare moments aren't about aesthetics. It's like a road construction worker writing his name on the asphalt, or a house painter using leftover paint to attempt a picture of something. As an artist, I am certainly not trying to become this type of worker. My approach does strive to achieve this type of form, but by visually analyzing the work environment, I try to reconstruct image and form, utilizing the everyday that goes unnoticed when viewed from within the creative process. Different dimensions of interaction with the same substances emerge. On the one hand, wood shavings from the carpentry workshop become part of three-dimensional collages, and on the other hand, they are turned into compositions where it's essential that the scraps remain untouched and untransformed; they are simply arranged in the space. What makes it interesting is that these scraps are rejected from production like useless bits. After considering all these things that inspire me, I came to the conclusion that I need to go back and pick through what seem to be previously discarded elements, make an artificial choice and perform one more culling. The paintings in this project also have a defective element that allows us to peek beyond the image and thus neutralize the thing. 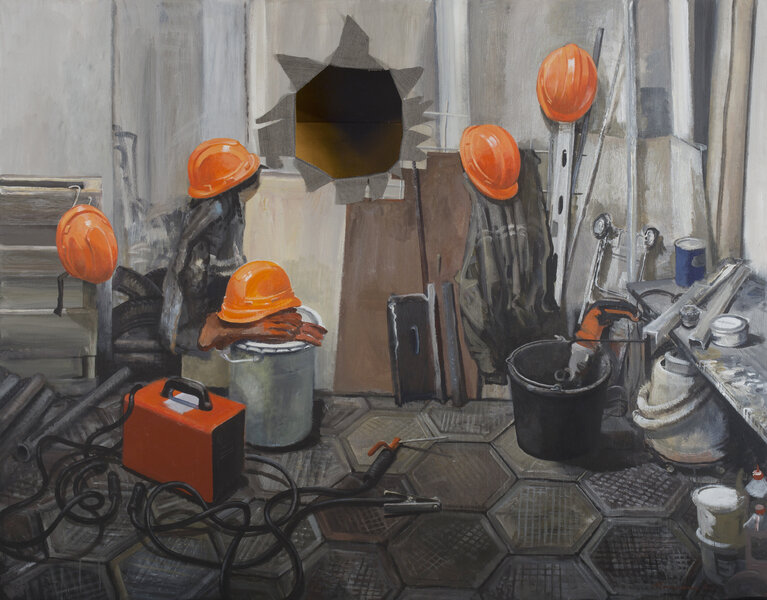 It seems we are away 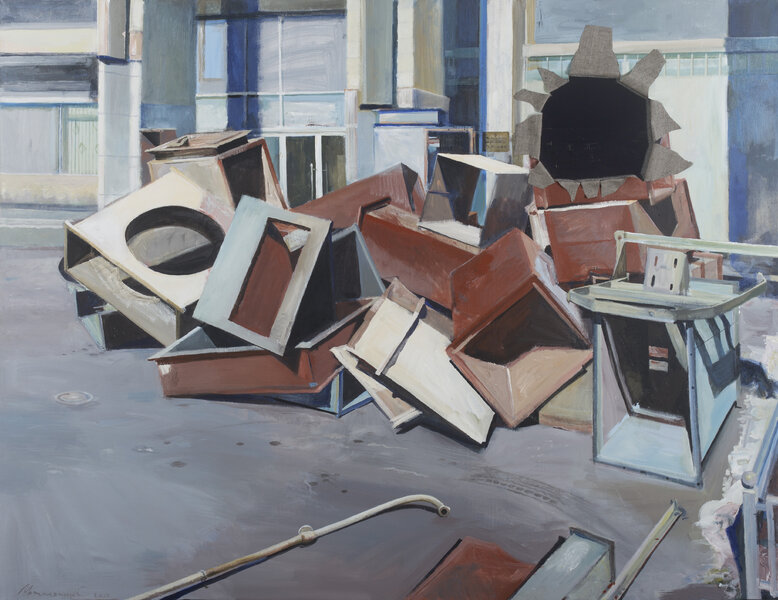 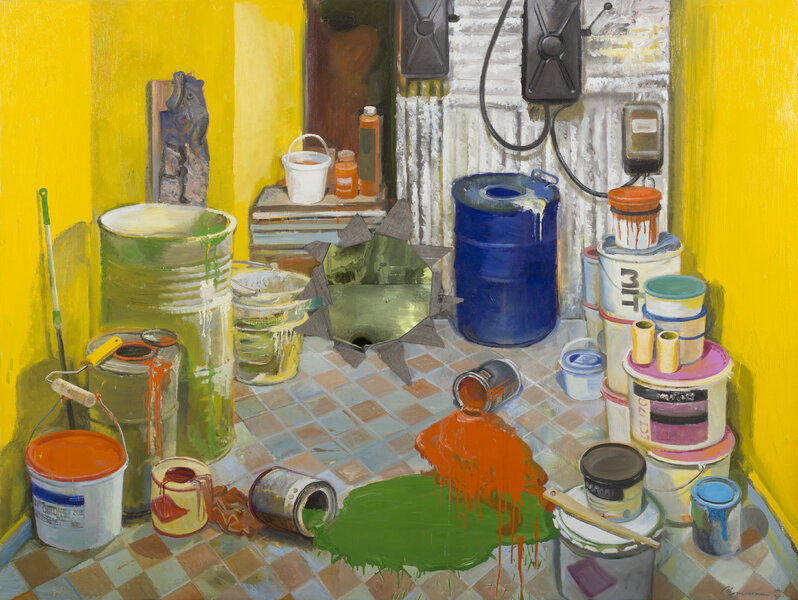