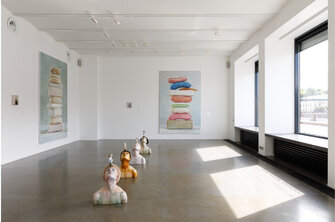 Motolyanets is faithful to soap. Having chosen soap as the theme and object of his artistic interest, he has succeeded in creating his own individual mythology. Soap is a constant metaphor, a nuclear mythologem, and also a material the artist works with. Just as for Joseph Beuys fat and wax were an independent, powerful textural element, and also a substitute, embodying the idea and meanings of “social plastics”, an ordinary piece of soap becomes a guide to the world of relevant meanings, manifesting itself as an indicator when launched into the right environment. Perhaps this is also a careful tactic, but it also has an element of irony (self-irony) and necessary critical distance. But soap in itself is an object loaded with various meanings, which usually have a disappearing connotation. For example, the property of soap to slip through the hands gives it a certain similarity to judgments without a clear, fixed line – this is a performative material, which tries to escape and vanish along with water, expressing the flowing and changeability of states. The phenomenology of soap is such that it allows the artist to adjust his attitude, establishing the necessary discourses of judgments.

In his new project, Motolyanets gathers together almost ten years’ experience of working with soap, utilizing diverse media he has tried over the past years: painting, photography, sculpture, objects, performance. Significantly, the first works in this cycle, canvases with depictions of piles of soap, were the artists’ response to the mass protests in Belarus two years ago. The political source of the works is not obvious. On the contrary, the towers of multicolored soap bars, in the style of “Richterian photo realism” are a triumph of the world of prosperity and consumerism, glamour and hedonism, and the hypertrophied scale reminds us of the success strategy in the promo images of pop art. The artist turns the aesthetic of “capitalist realism” against itself, working on its territory – and the silent opposition of stretched figures (lying and standing) refers to archaic forms of rituals, traces of which remains in primitive structures – dolmens. Rituals of purification? Stones worn away by time, wind and water, dolmens are synonymous with slivers of soap: the natural and the elemental rhyme with the human and social. There is something childish and infantile in building soap dolmens – a return to archetypical structures, asserting the presence of humans in the world.

The name “Children’s Soap” refers us to the works of classics of the Moscow conceptual school, Elena Yelagina and Igor Makarevich, where the adjectives “hellish”, “higher”, combined with an objective, material bearer, take essential properties from predicates. The neutral gender of soap is deceptive, and the artist works with gender differences in language, discovering a pronounced masculine essence in vertical pyramids, but one which is on the verge of toppling over – a confirmation of its instability. In 2014, Motolyanets staged the performance “Mylo Padlo” (“Soap Foul”). Boxes of industrial soap bars fell off a scaffold tower after the artist performed an auto-da-fe in a shining iron halo, hanging himself from the branch of an oak tree. In this staged hanging, the soap bars fell at the same time that the artist died, a significant gesture of breaking with the burden of artistic responsibility, and a kind of purification.

This time, the task is different. The artist delegates the performance to different people who are naked to the waist, requiring them to keep a pyramids of soap bars on their heads. This clown performance is a difficult test for maintaining balance, a collective ritual to keep the shaky soap architecture upright. “This is a project about the feeling of guilt, about the possibility of purification and the possibility of washing oneself clean,” the artist says. “About the fact that guilt and responsibility still lie at the basis of the patriarchal world order. The pressure of this incomprehensible responsibility leads to a convulsion of balancing and makes it impossible to go outside the boundaries of the male role without losing balance, i.e. without destroying the structure of the pyramid.” A brief moment of balance is preserved on polaroid and painting, where the diffusion of forms, their dispersal in space, stresses the elusive nature of the events.

The artist decided to turn the “convulsion of balancing” into a 3-D form, and thus the sculptures appeared – painted torsos of mannequins with their eyes closed. The result was rather contradictory: the figures are in a state of resigned peace, sunk in prayer or trance, and a pyramid raises their inner view to the sky like a third eye. After passing initiation, they have become priests (or slaves) of an unknown cult – a soap vertical, and they themselves have been partially turned into soap. Painting their bodies in the color spectrum of towers of soap, the artist contemplates the difficulty of combining color and 3-D forms. “The color of soap smoothly merges into the color of the body of the sculpture, not painting the body, but purifying it. The body has its own color, and it also has a color significance that we find difficult to understand - transparency”. The obvious mimicry creates a situation of dependence and subordination, perhaps voluntary, which turns the figures into fanatics of self-purification, depicted at the moment when the soap vertical as an instrument of the pure future has changed their entire structure, making them completely like itself. The rest is silence. 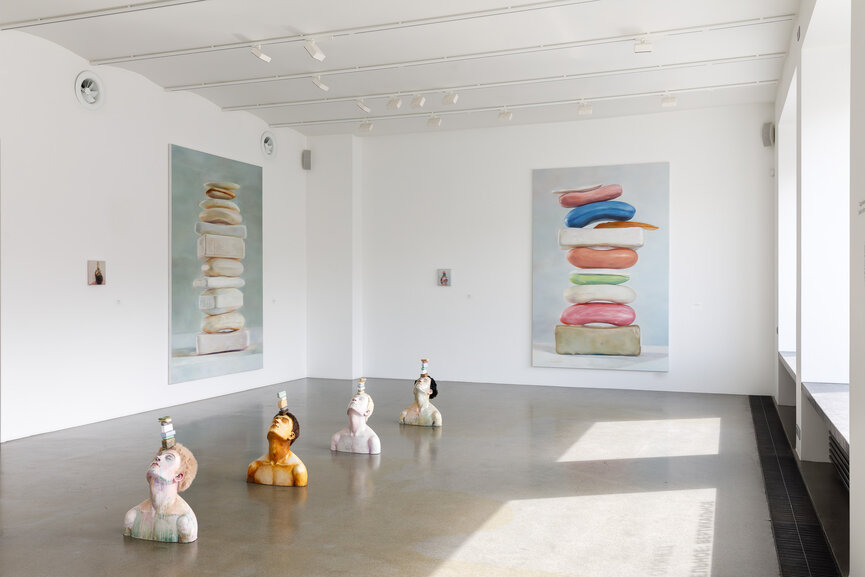 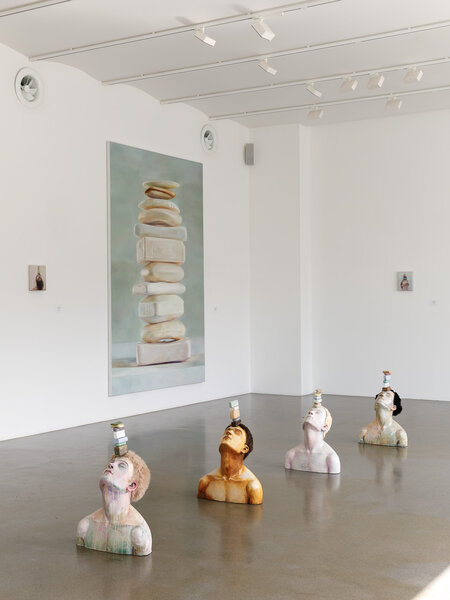 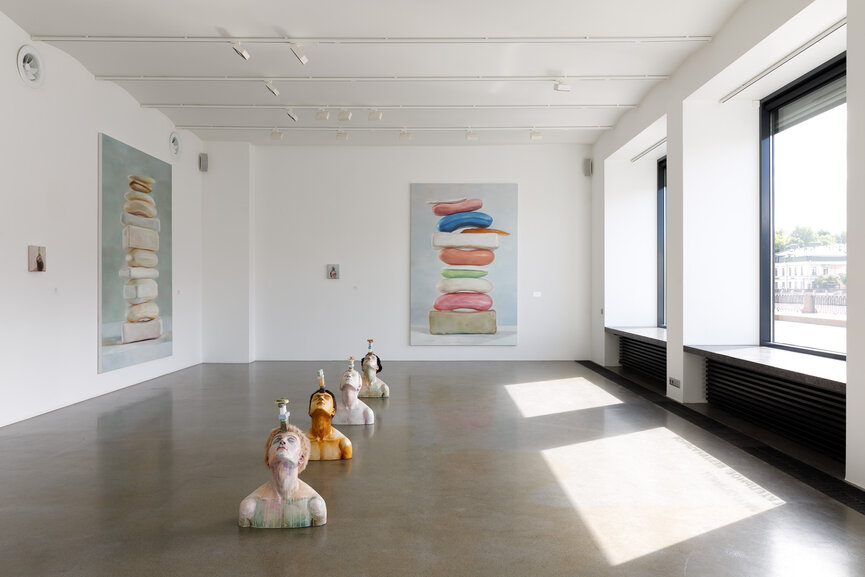 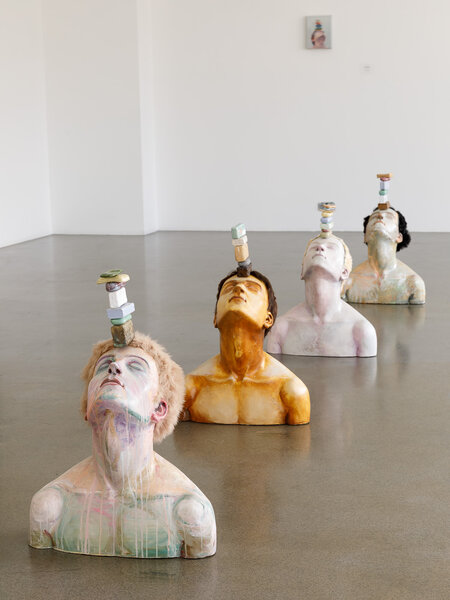 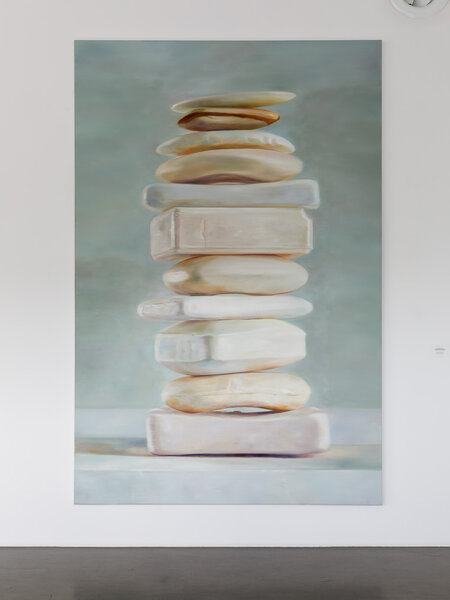 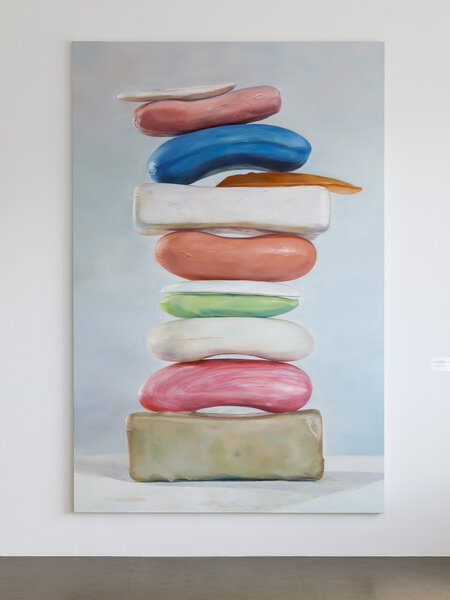 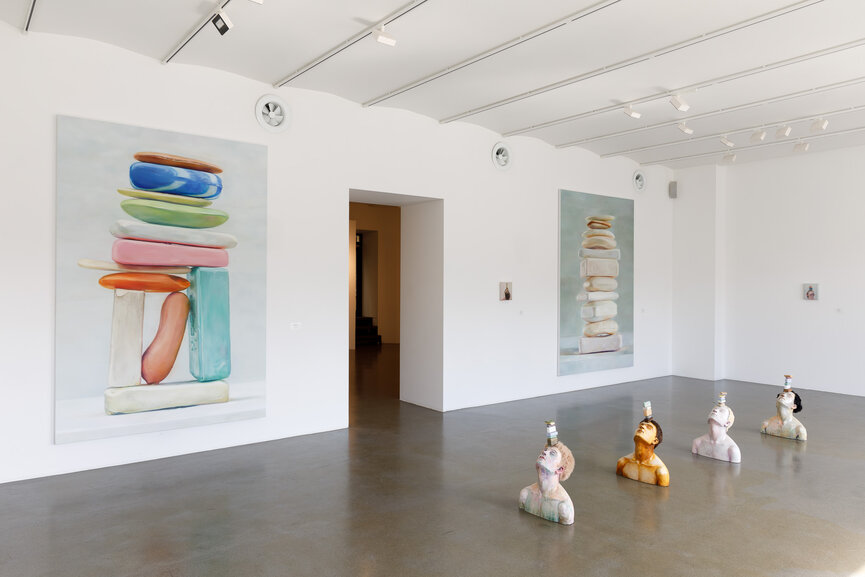 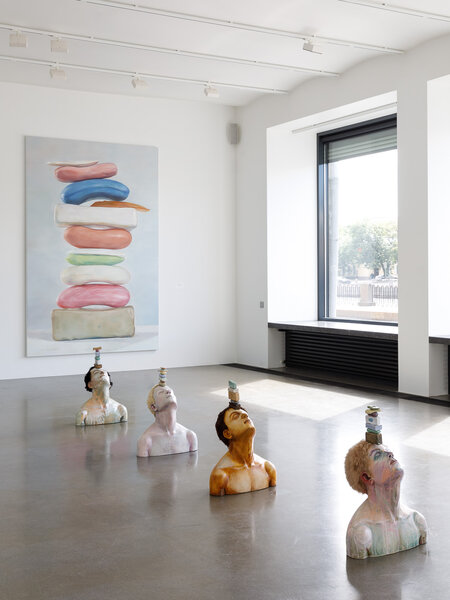 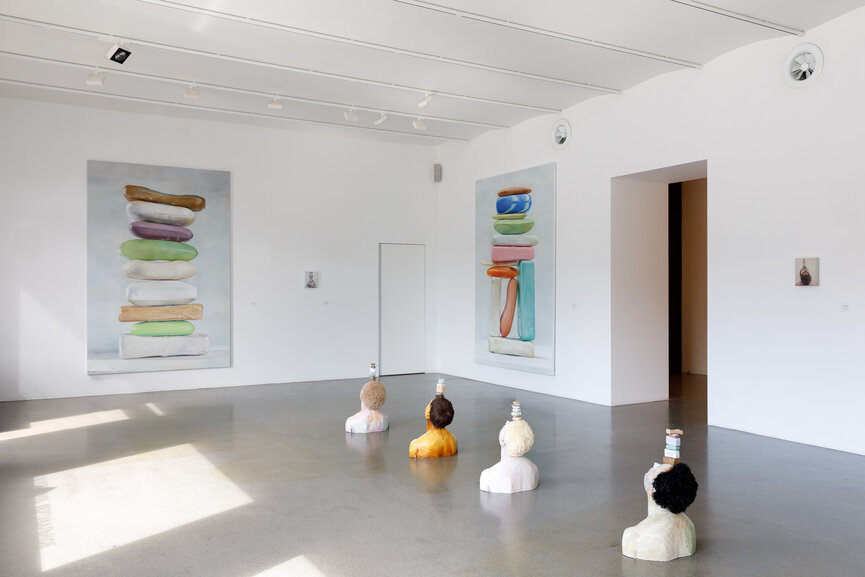 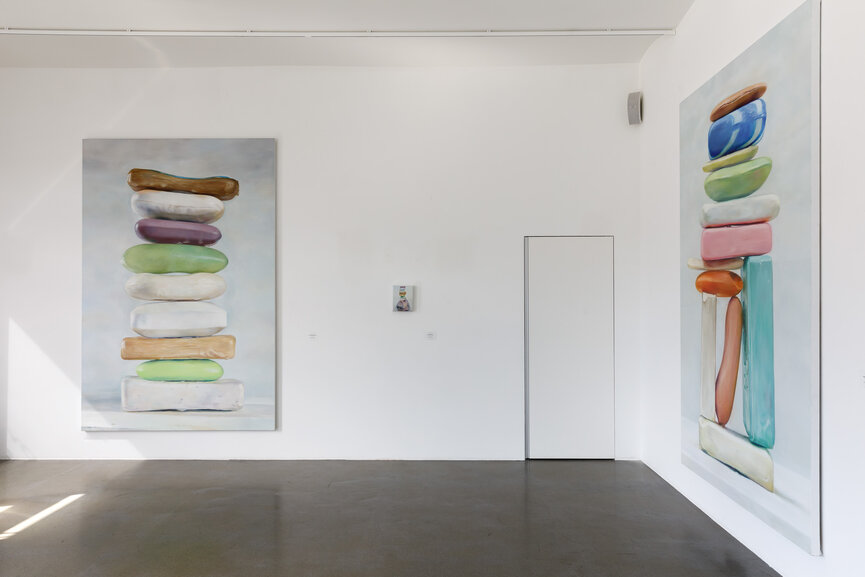 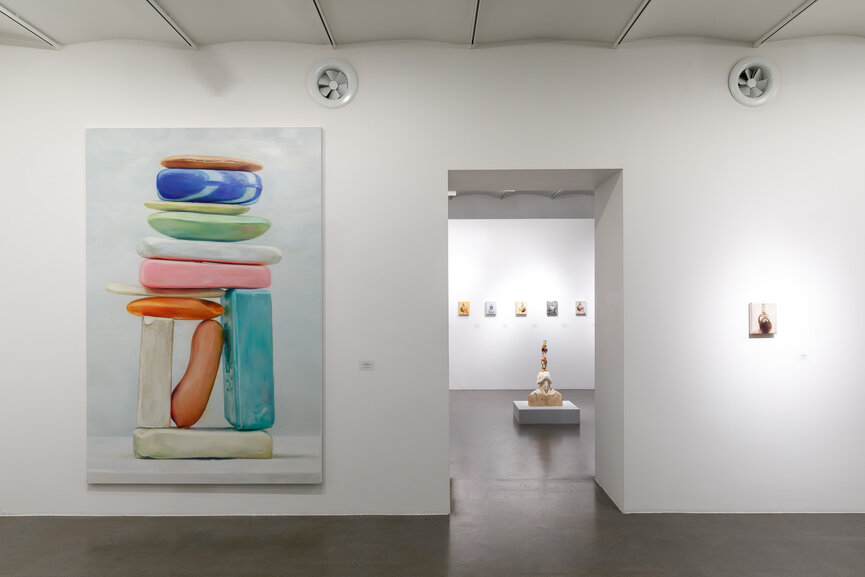 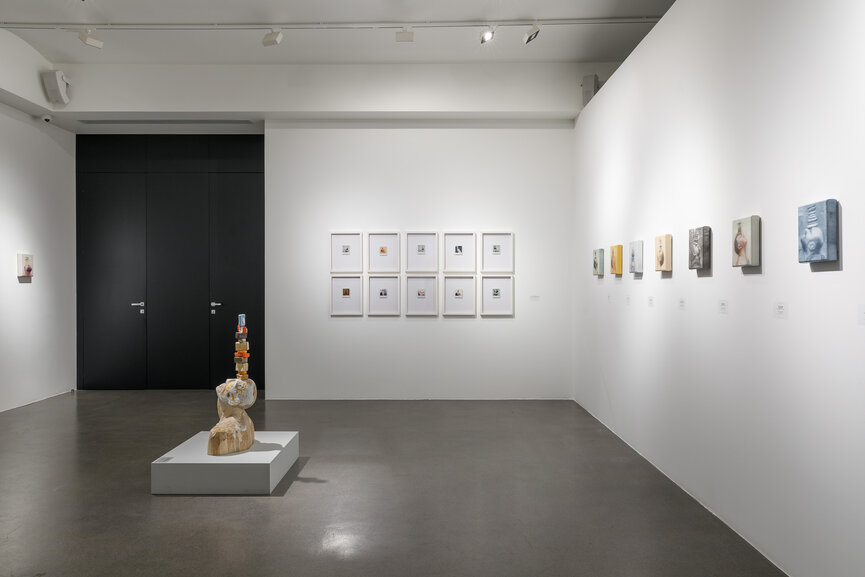 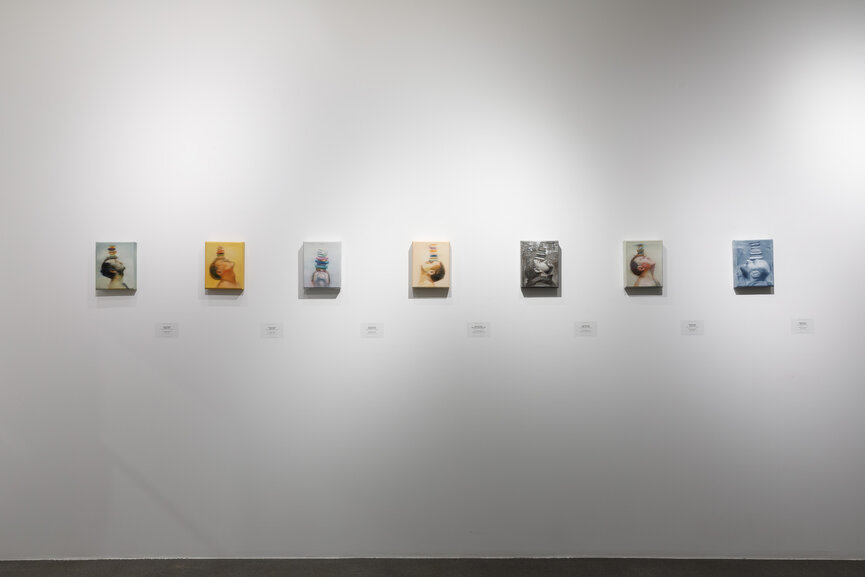 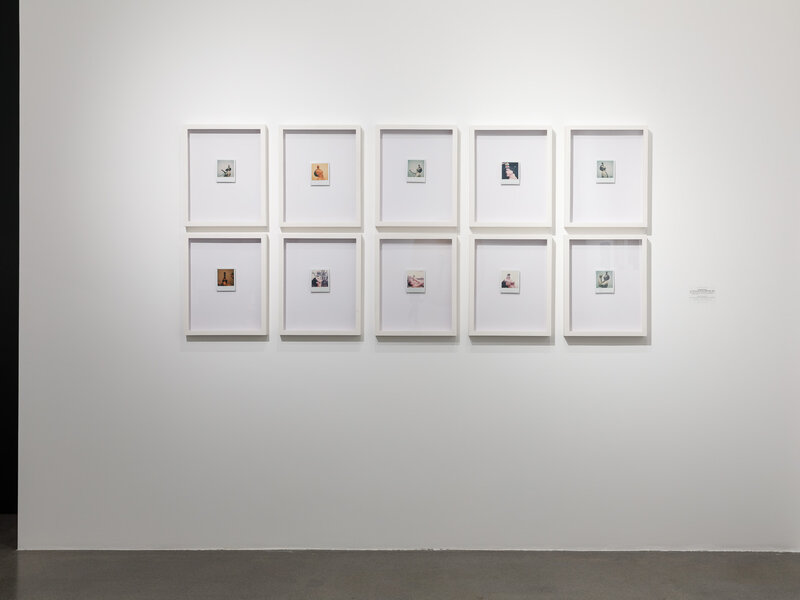 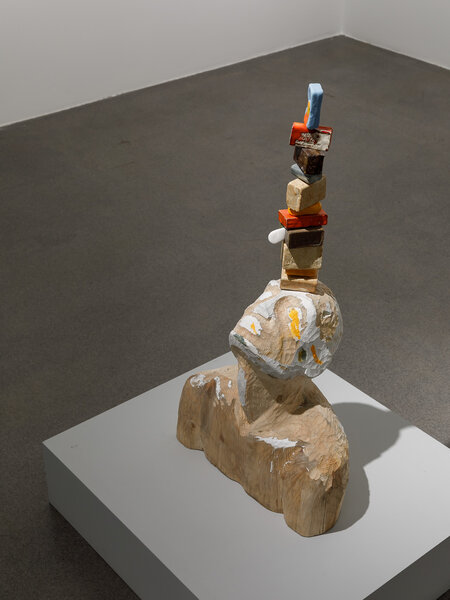 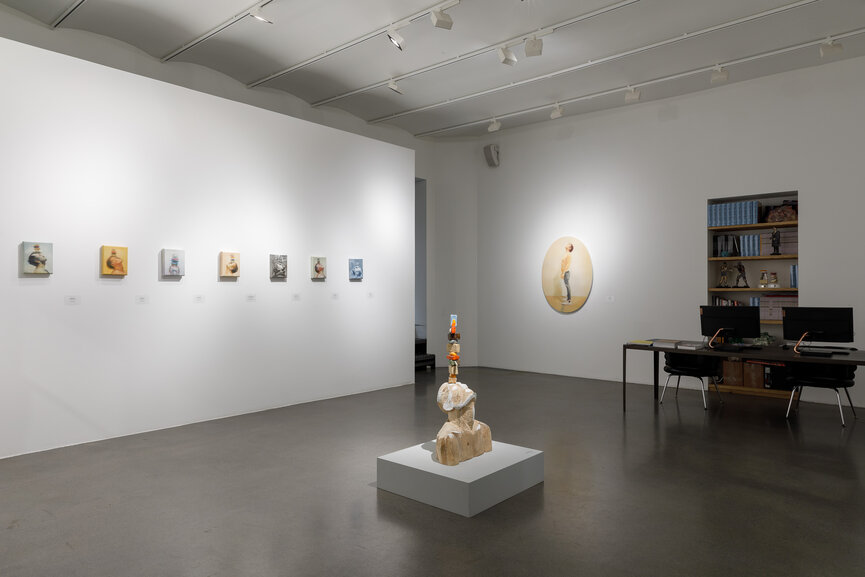 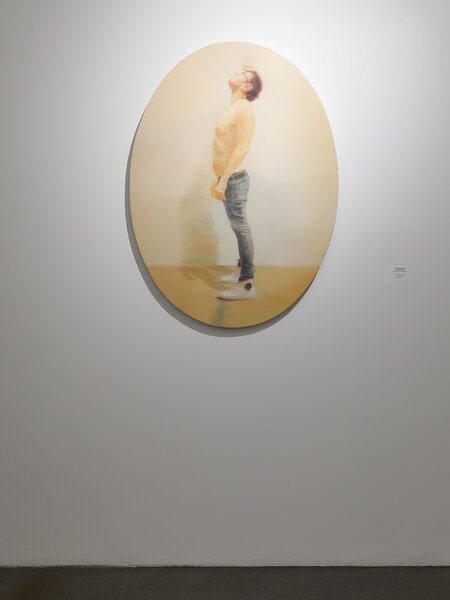 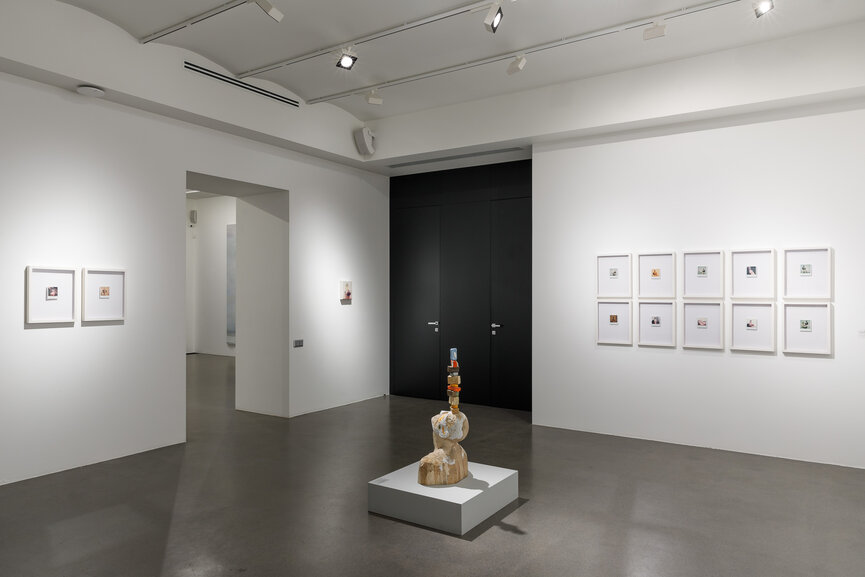