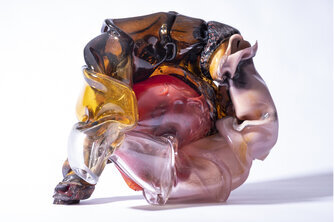 In our simple everyday perception, objects seem like stationary things. By default, we think of sculptures, furniture, or household items as static objects that take up space and are juxtaposed to the flesh. As we move around and look at something from different angles, we discover nuances and new qualities. However, each facet of our perception gives us an idea of a particular fragment, not of the object as a whole. The only way to capture the true form and identity of an object is to keep moving and continually change the angle. Similarly, a stationary spatial body can be identified only through a sequence of perceptions in motion. This point of view, which was developed in Edmund Husserl's “Thing and Space” lectures (1907), points to a central theme in the approach to sculptural forms. The object and space are cognizable only through a sequence of tactile and visual perceptions in motion.

The idea that we can find objectivity, reality, and truth only in conjunction with kinesthetic movement has carried through from this historical context and persists today. For example, the performance artist Rudolf Schwarzkogler used his “Manifest Panorama” of 1965 to introduce the concept of an integral work of art that diverges from the static object. According to his idea, artists create a synesthetic space that viewers enter or immerse themselves in for a unique and inimitable experience of perception. The combination of smells, sounds, and objects in the room create a unified synesthetic work of art that each new visitor perceives in their own way, thus becoming a “co-performer”. Husserl’s and Schwarzkogler’s positions represent two sides of the kinesthetic concept of the object. For both, movement is essential for understanding the object. But while Husserl starts with a prescribed object, which gradually reveals its qualities as the tactile and visual perception changes, Schwarzkogler rejects the idea of an artistic object. For Schwarzkogler, the object itself is set in motion in a long series of appearances and disappearances.

The art of Maria Koshenkova is oriented in the same system of coordinates. From the very start, glass is an excellent material for her work. She starts creating series of objects early on. Groups of diverse glass objects act as allusions to things like hearts, ropes, or the used furniture in the current exhibition. In her spatial installations, individual objects are transformed into new integral works (meta-objects), which are revealed to the viewer only by kinetic perception. While Koshenkova’s work has a quality of expansive movement that shapes the space around it, it isn’t based solely on her conceptual impulses. In her preface to this exhibit at the Marina Gisich Gallery, the artist notes that “glass never obeys the plan”, which defines the hallmark of her work. The creative process involves improvisation, rather than perfectly following a design. This is not about carrying out a plan and forcing the material to take the intended form. The external properties of the material and its physical qualities play a crucial role in the creative process. In this way, the artist's position also converges with the position of Rudolf Schwarzkogler. He believed it was extremely important to let the material take the lead so that the artist could achieve a correlation with reality in their work.

The techniques and limitations of working with glass are a window into how the process of creating a sculpture requires an incessant sequence of tactile and visual effects. The fluid, malleable material is attached to long tubes, rotated and blown out—the entire body is involved in shaping it. All decisions have to be made quickly, while the material is in a liquid state and has not had time to solidify. The result offers sensory evidence of the kinetic creative process. Sculptures made this way do not depict existing real shapes, but embody the dynamic process of tactile and visual shaping (including through the sensations they evoke). It is a collaboration between the material’s own logic and the artist’s creative influence.

At the next stage, the artist fits her artifacts into existing conceptual contexts and categories of objects. At the exhibition at the Marina Gisich Gallery, this is reflected in the use of ordinary food service equipment. Due to their everyday purpose, utilitarian items such as kitchen prep tables, sinks, and shelving form a conceptual framework for the art objects placed on them. On the one hand, common kitchen items serve as displays for glass objects. The artist uses color to merge the two types of objects into one, or achieves greater expressiveness by contrasting their appearance and meaning. The work of art and the display piece become intertwined as an inseparable integral object. At the same time, the sensory and conceptual messages do not disappear. A wooden chopping block involuntarily evokes creepy images of parts of a creature that has only recently stopped breathing. The glass objects in this context are interpreted as organs. However, the smoothness and softness of these glass shapes evokes a pleasant feeling, directly contradicting the end-of-life message. The entire exhibition is a long dialectical dialogue between beauty and life, initially personified by the smoothness and transparency of glass, and the repulsive cruelty manifested in the everyday purpose of the food service kitchen. 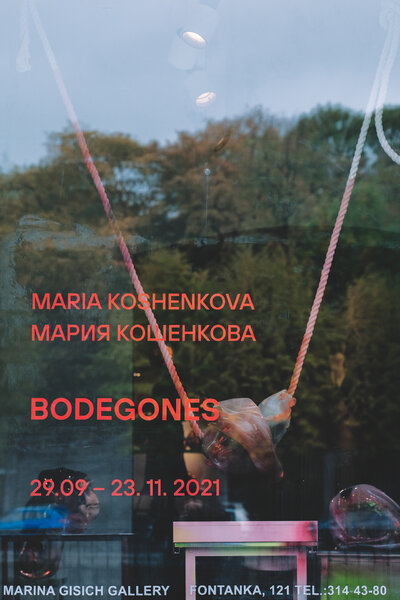 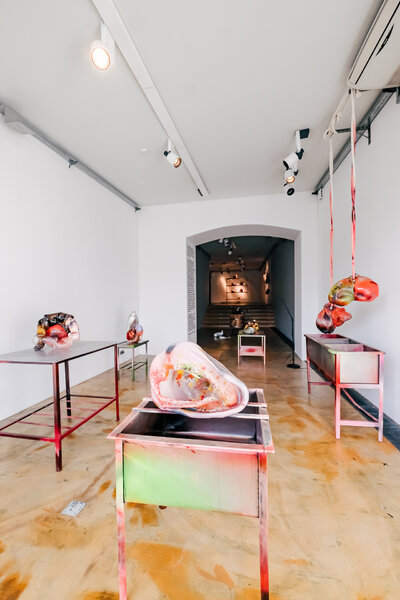 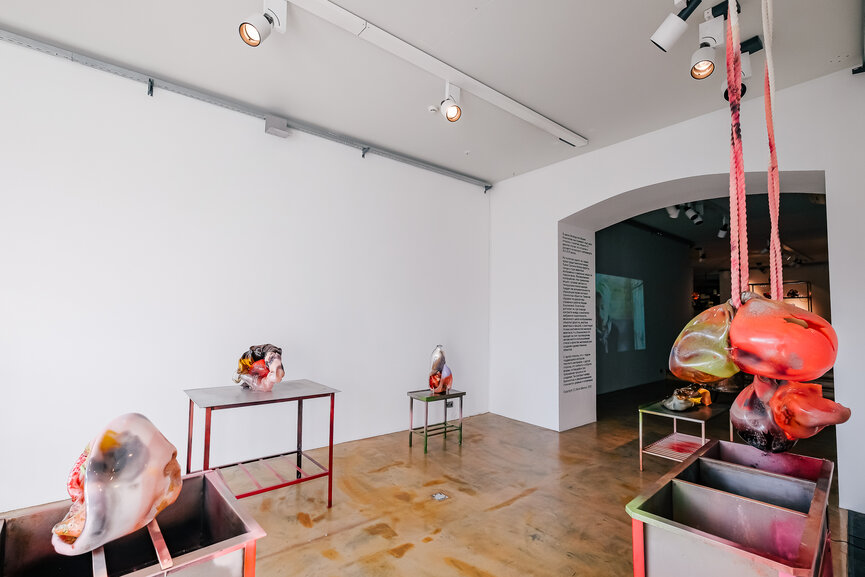 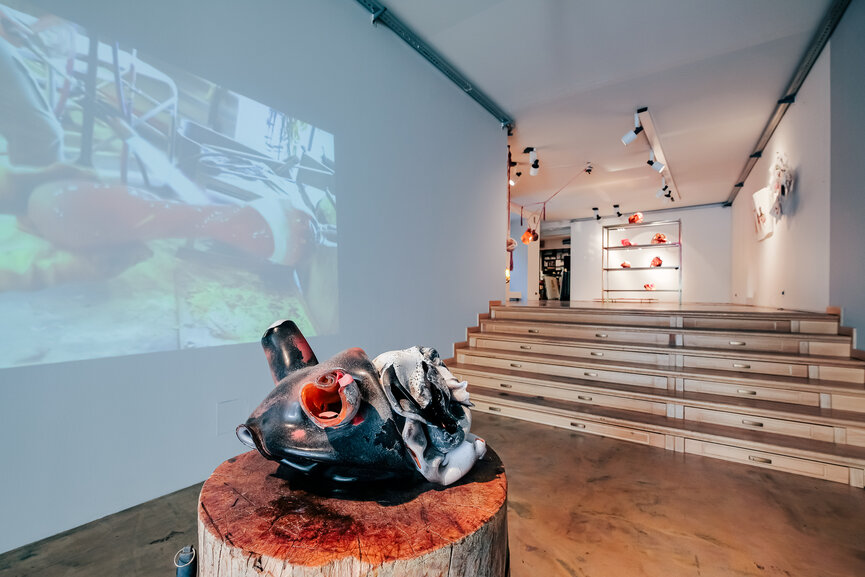 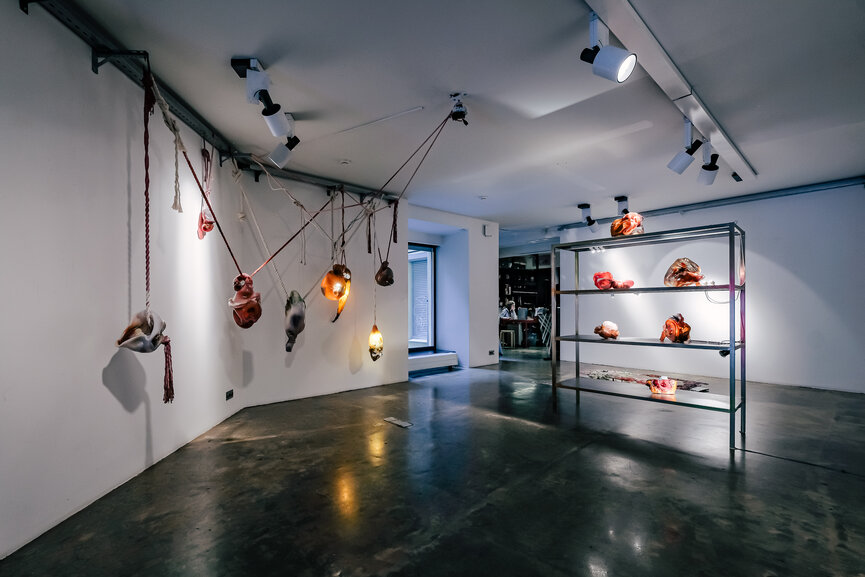 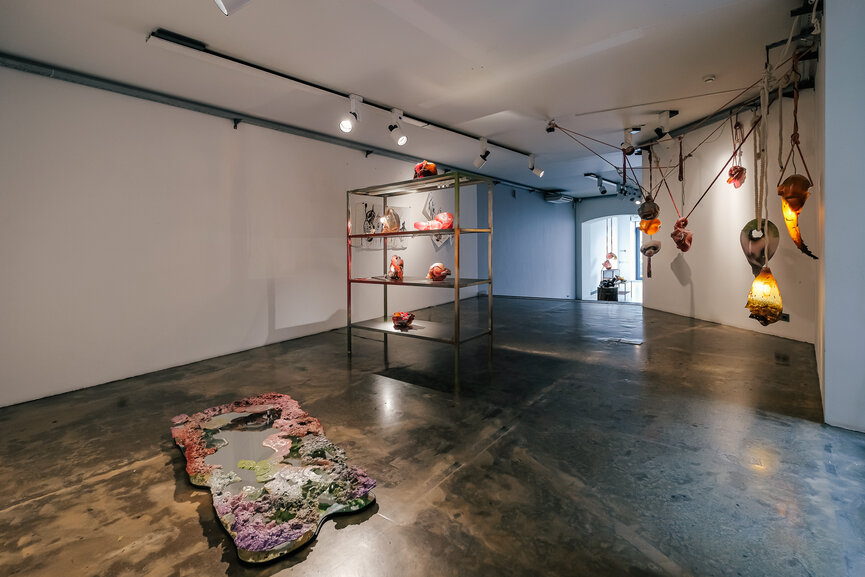 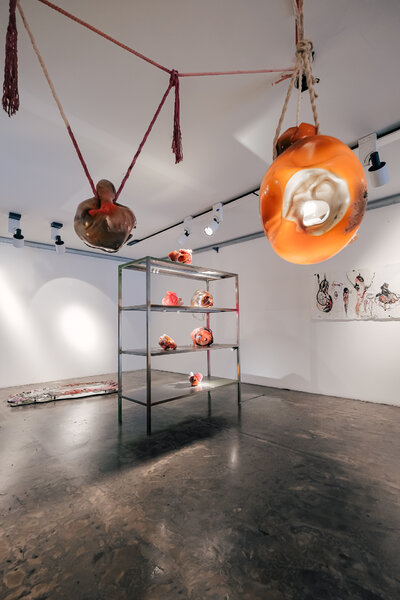 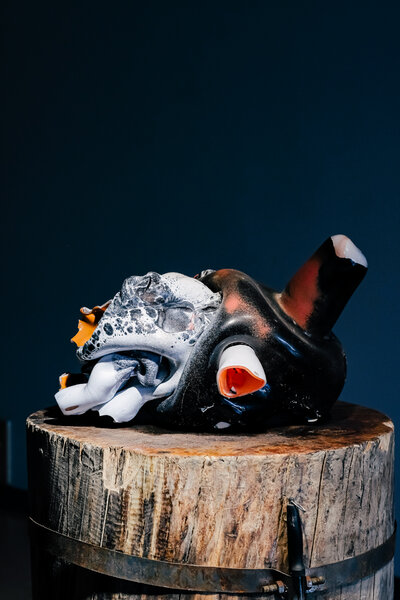 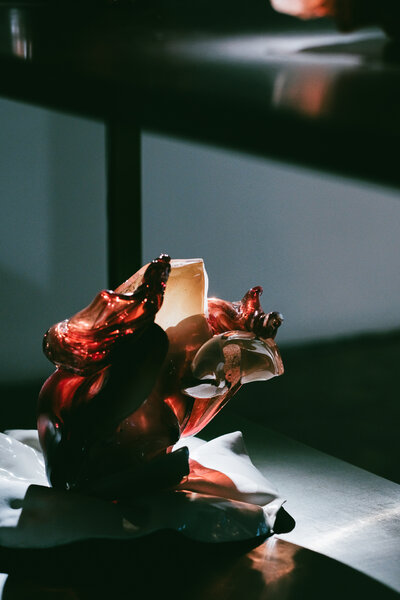 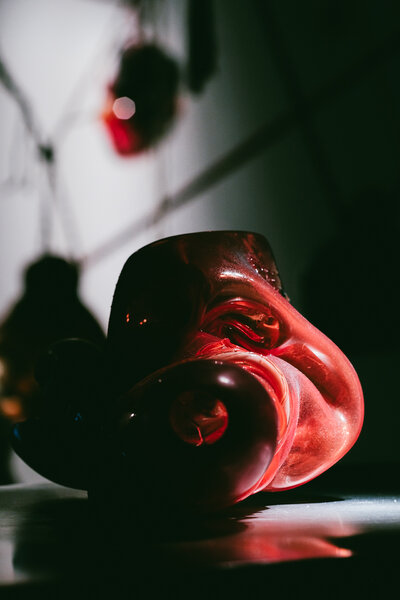 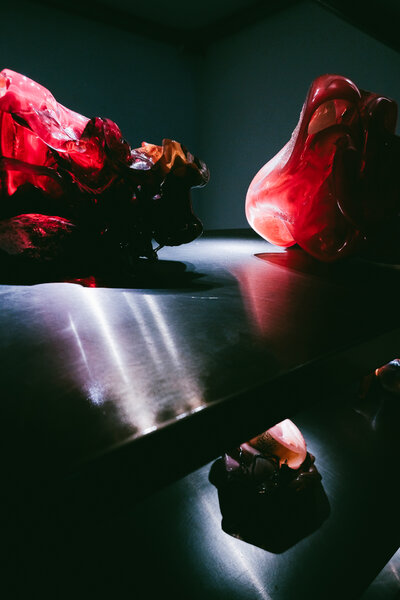