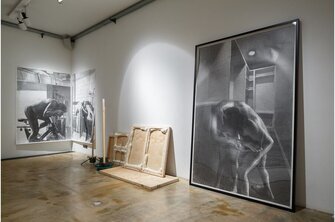 In the new project House for Sale, Dmitry Gretsky and Evgeniya Kats act like truly contemporary artists — they are ready to expose their life to the spectator without any embarrassment over its deviations and existential problems. Oversized graphic sheets are devoted to the strange plights and puzzling situations of one couple in the confined space of a house.

The nude body in these works cannot be confused with any other — it is a contemporary body that exists outside the classical laws of beauty, with reflexes conditioned by the repressive experience of the 20th century, and deprived of social masks. The contemporary body first appears in Lucien Freud and Francis Bacon. One realistically showed male and female figures in all their unsightly details, while the other showed cinematic expression in depicting the impetuous movement of a character inside a cube drawn on a plane. But in the search for the closest resemblances to these drawings, we should mention two very different Americans who are classics of figurative painting: Philip Pearlstein and Eric Fischl. As in Pearlstein’s paintings, executed in a dry graphical manner, the works of Gretsky and Katz depict the semi-nudist existence of characters who have no one to be shy of.

The artistic couple from St. Petersburg live and work in Toronto. They belong to a small group of artists who have managed not only to merge academic training with current topics and narratives, but also to prove that an academic painter is able to think like a contemporary artist. By moving to Canada and changing their artistic environment, they broke off their relationship with the Russian tradition of representation that was front and center in their previous works. While Gretsky and Kats used to compulsively demonstrate the entire range of their abilities with the practiced skill of professional painters, a flexible self-restraint in their new surroundings has benefited this new series of works.

The drawings in the House for Sale series have a completely different intonation — now the artists are documenting, not painting. Black and white graphics are much more precise when depicting complex and strong emotional states. They don’t have the excessive drama of the pictorial interiors from the previous works in the Living Spacecycle. The artists, using just a paper sheet and taking nothing from the past but the large format, leave the viewer face to face with the graphic material. The nude figures in the works are nearly life size — we are presented with a monumental format. At the same time, it is the nude pose so familiar from years of studying at the Academy of Arts, when the student is obliged to demonstrate mastery of the craft. It is obvious that the compositions are based on photos taken by the artists, but their choice of monochrome drawing as the media reduces the expressive techniques.

The drawing technique is well suited to the context: it seems to manifest the monotony with which the artist shades the sheet of paper. The pencil strokes overflow the surface of the graphic sheet, transforming a technique into the meaning and content of the work. The artists make the dejection and boredom of their characters tangible. It is ever present in all their exhausting occupations, whether on the exercise bike, in the bathroom, in the corridor, in the bedroom, in the living room, in the kitchen, in the boiler room, in the attic or even in the artist’s studio… Gretsky and Kats have included every spot.

Edward Hopper, once a great American artist and proponent of solitude, poeticized deserted interiors flooded with artificial or natural light in his paintings. The house in the House for Sale series is not yet fully lived-in — in one of the works, a naked man is standing on a chair, installing a light fixture. The authors are ready to share with the viewer the joy of acquiring a home and its association with obtaining upper-middle-class status, but at the same time they pull frightening shadows out of the corners of the rooms using just a single pencil lead. The viewer may inadvertently become a participant in the horror that is unfolding in the typical scenery of suburbia. The house is for sale, but the deal doesn’t include all its shadows, and there is no way out of the house for them. 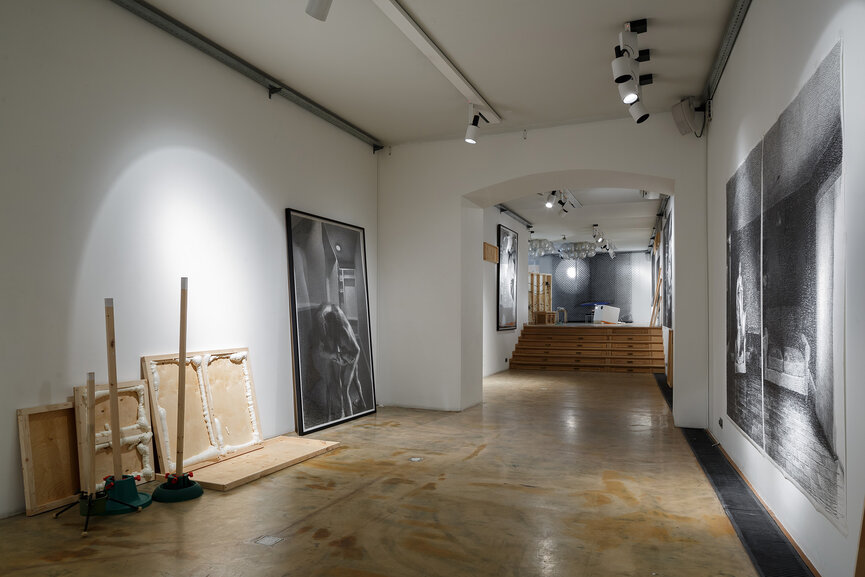 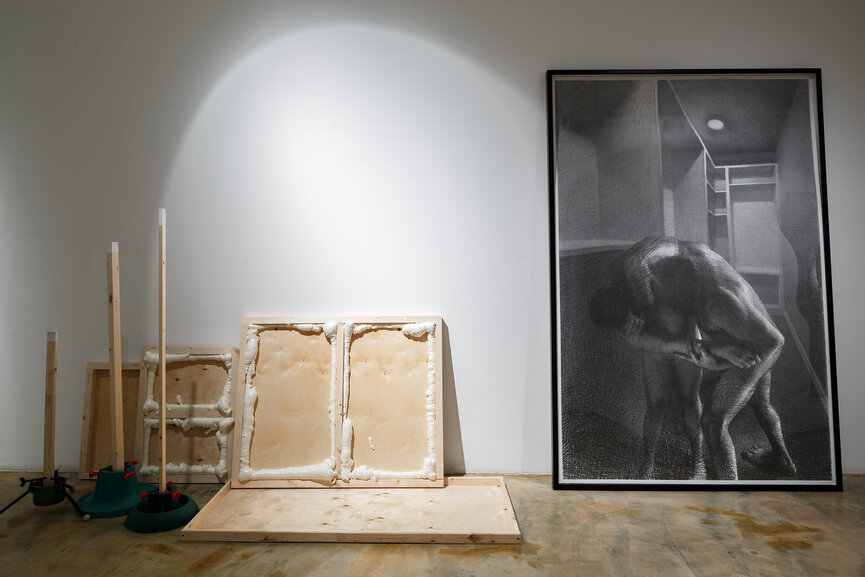 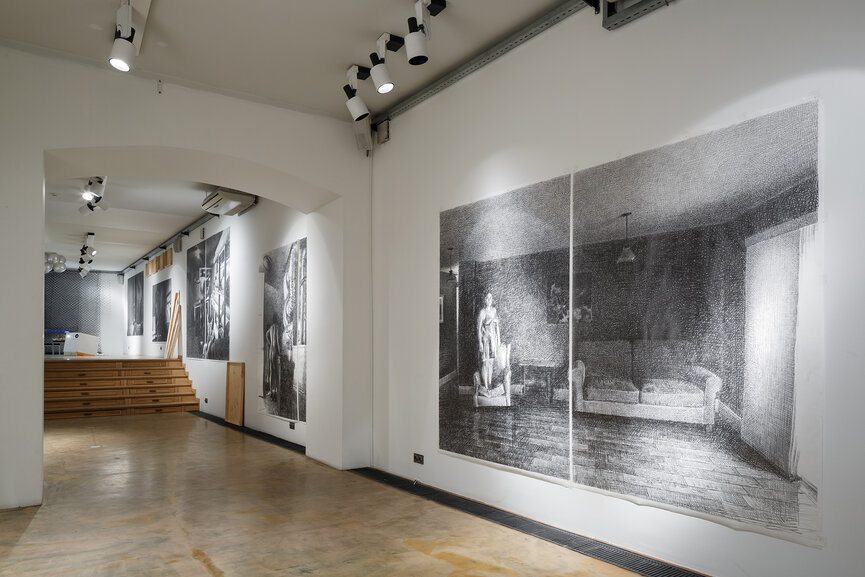 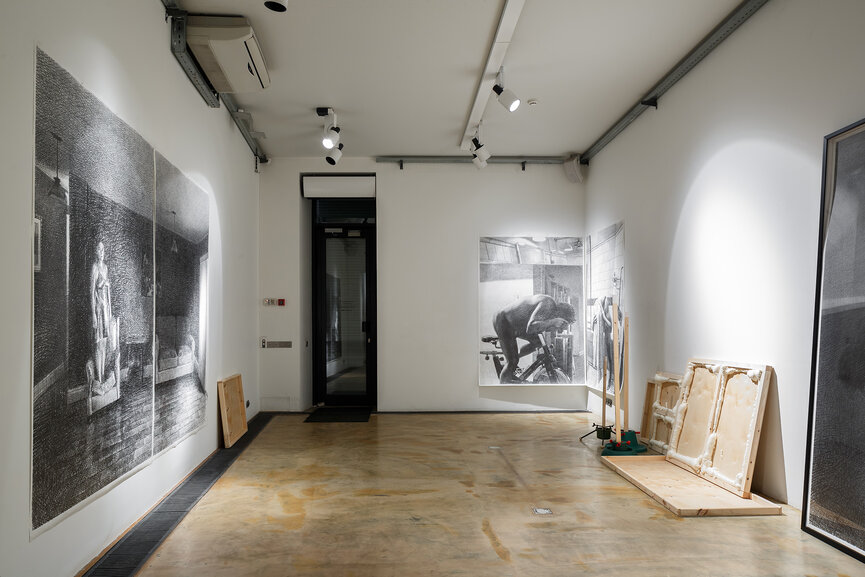 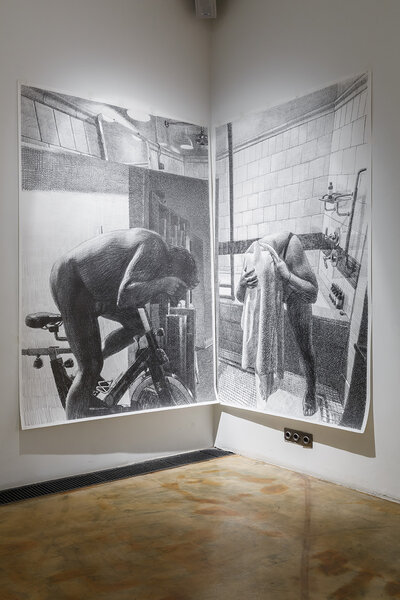 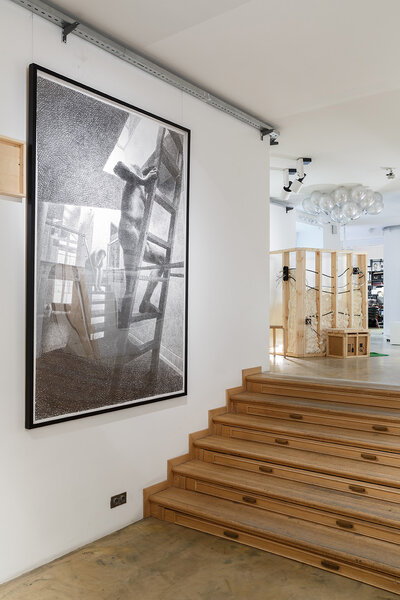 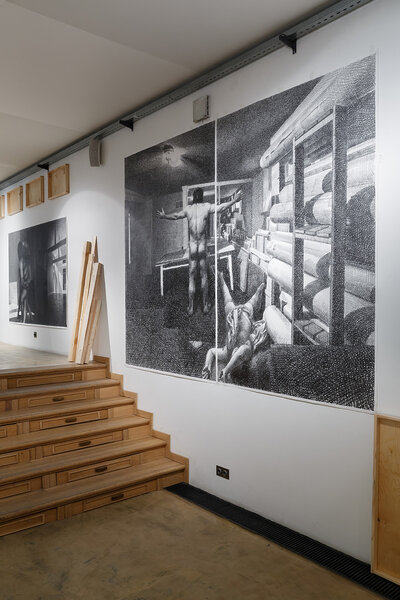 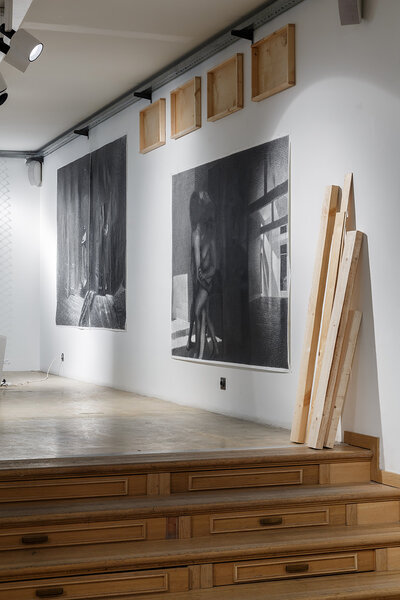 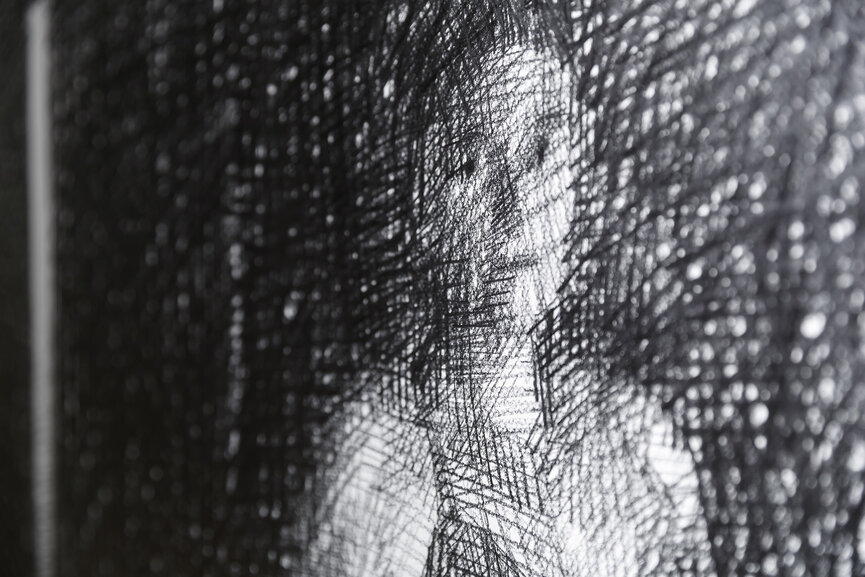 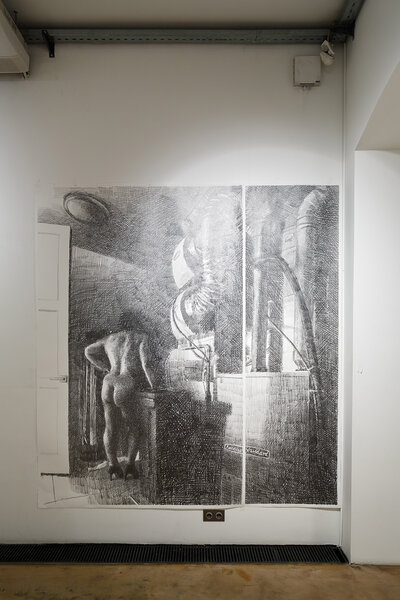 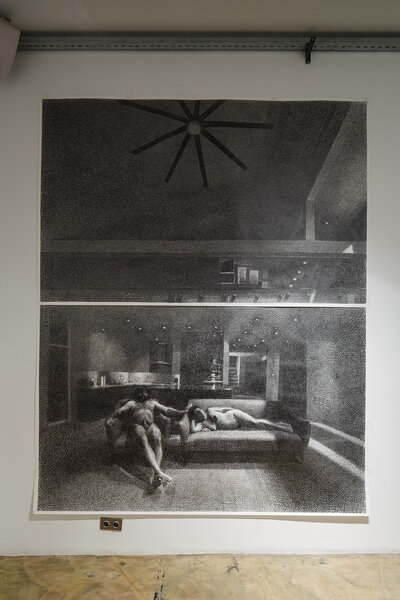 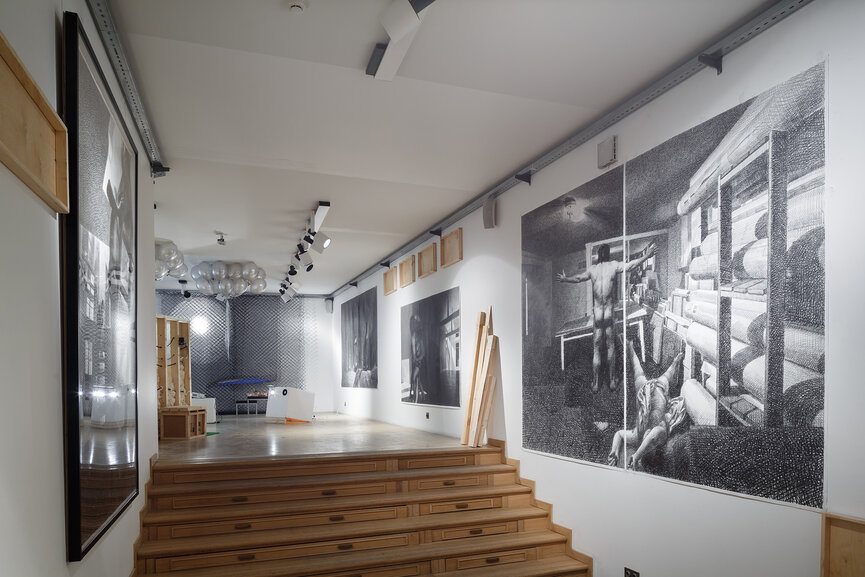 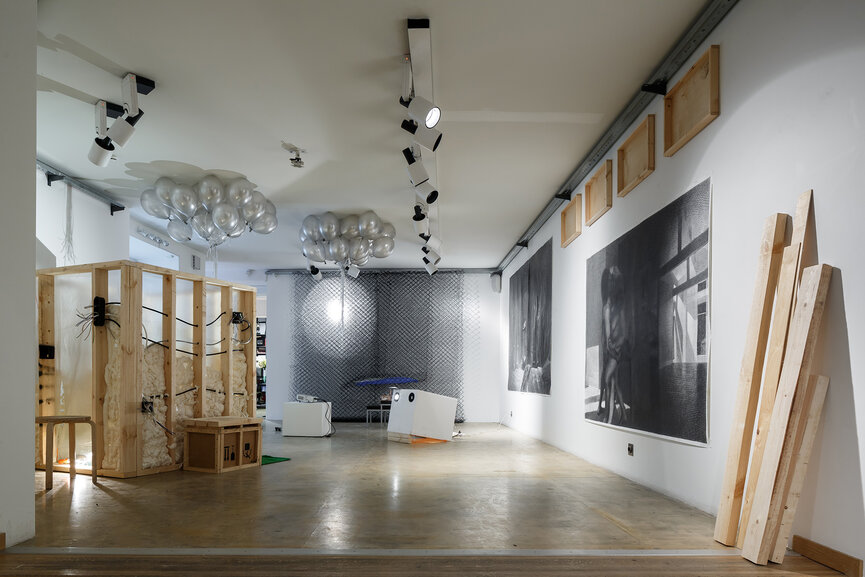 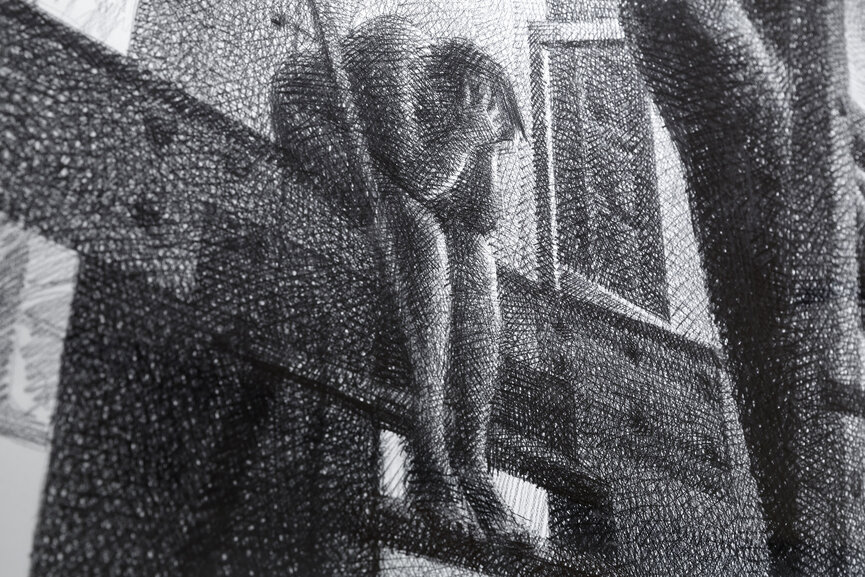 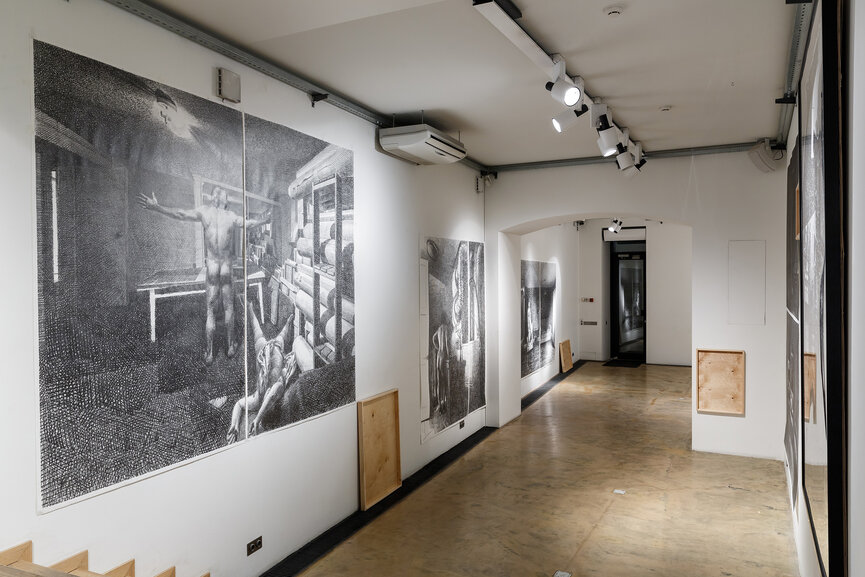 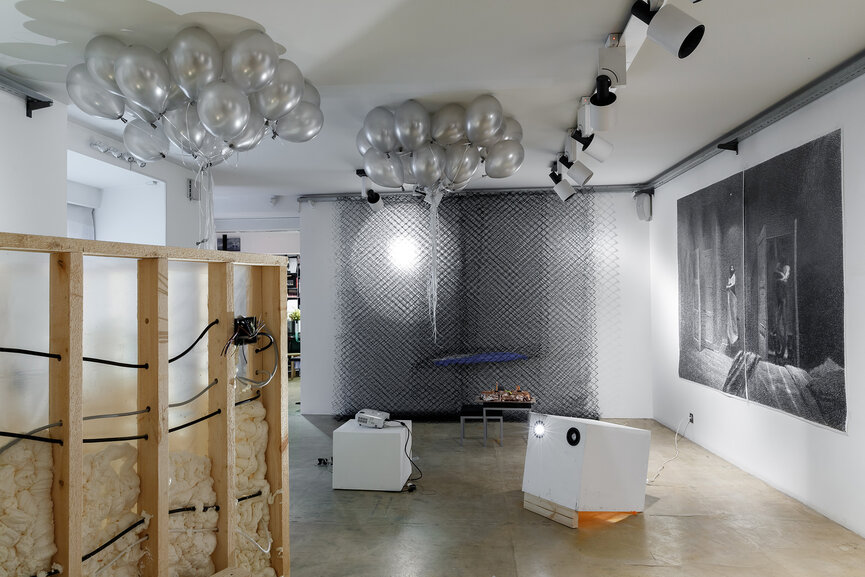 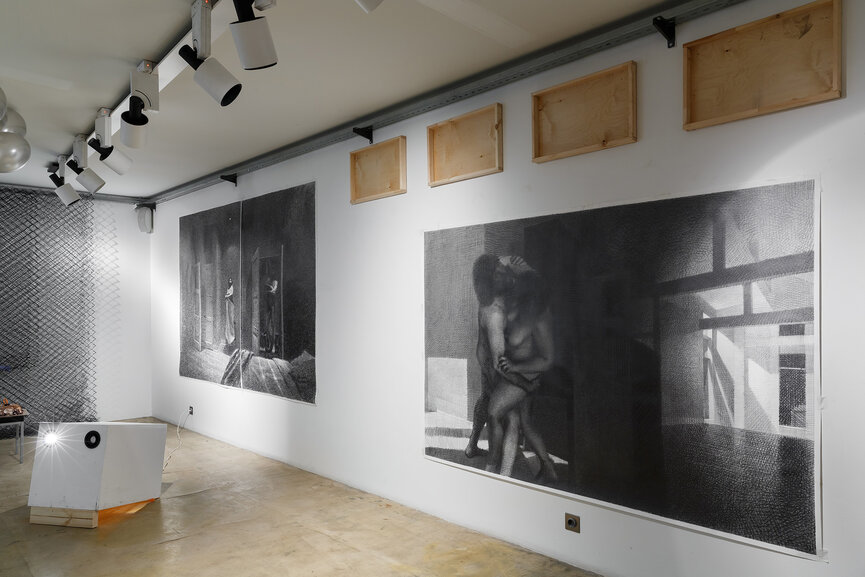 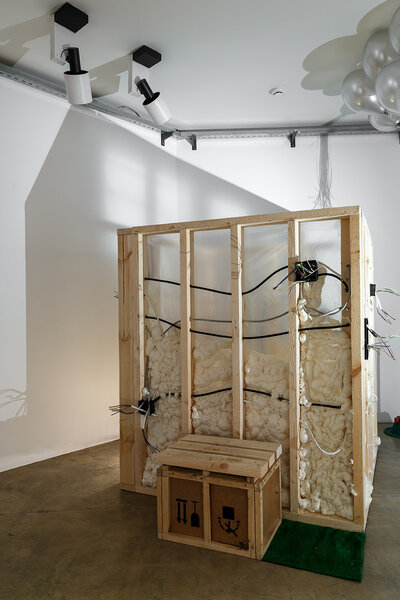 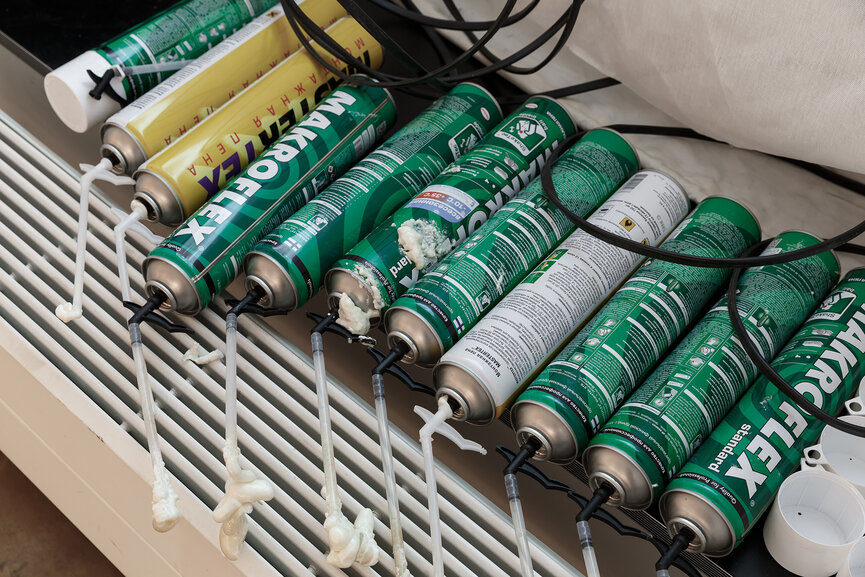 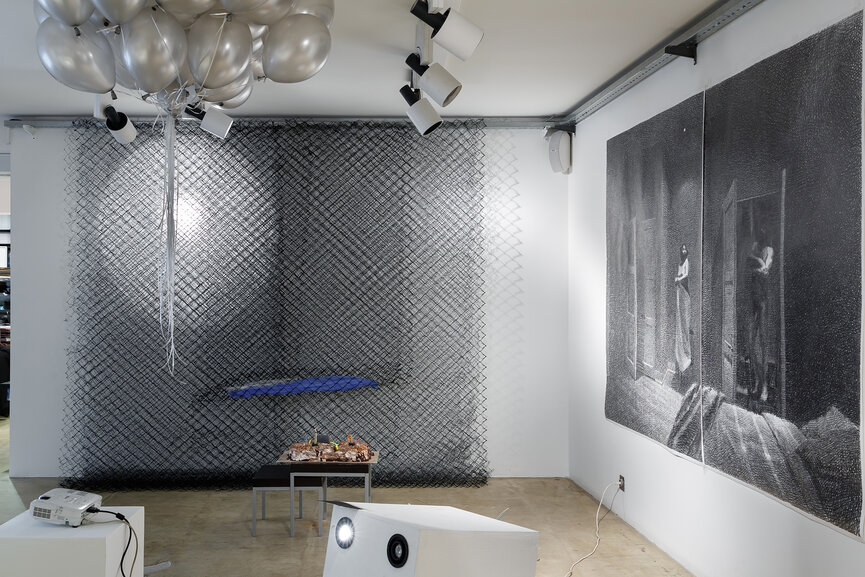 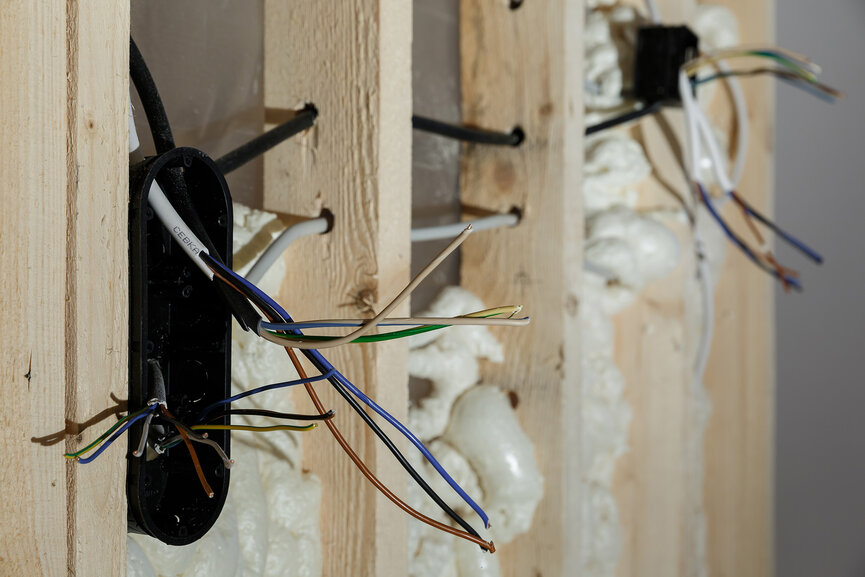 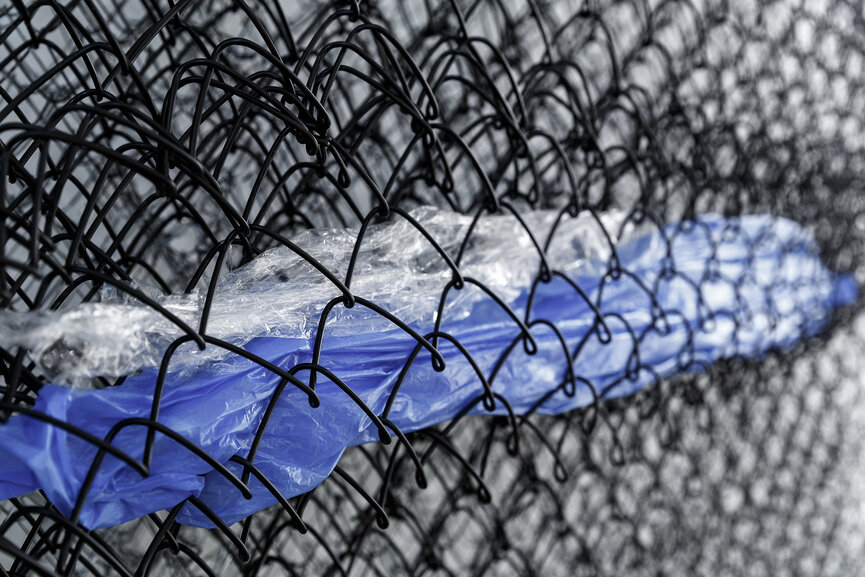 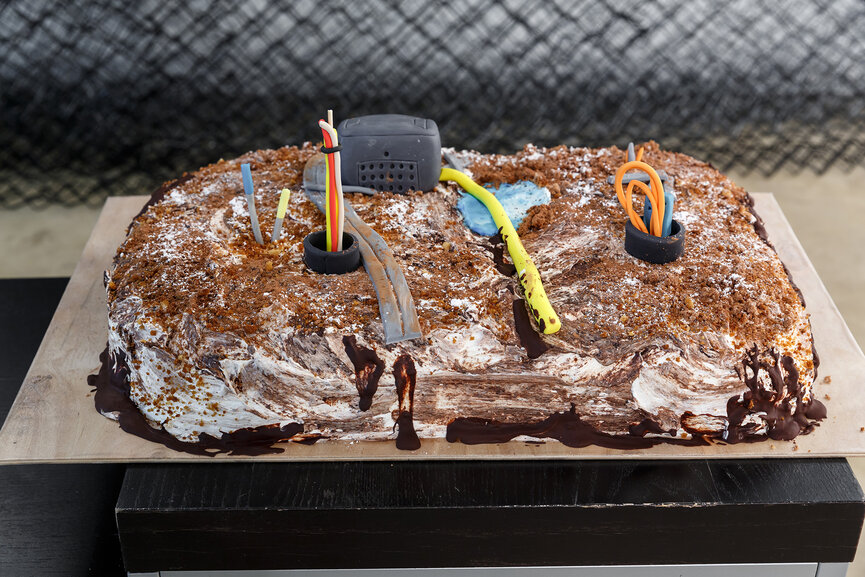 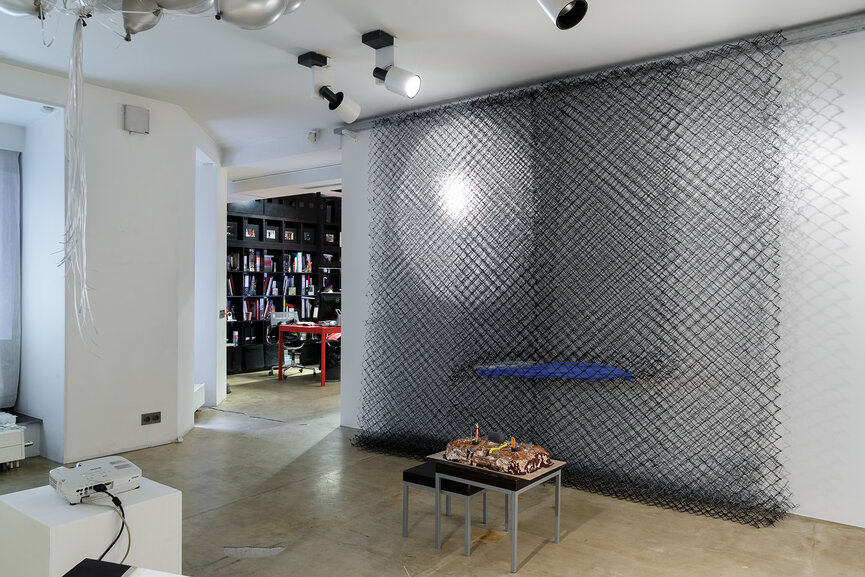