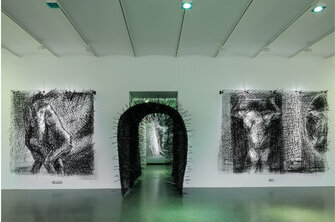 To begin with, there was only one mirror in which Narcissus could look at himself – the surface of the water. But others soon appeared, and over the last 150 years alone, the number of artificial mirrors has become uncountable, and every day brings new ones – Narcissus is in a panic. Dmitry Gretsky and Evgenia Kats help him out and show him how to survive in an era when we rarely see the natural sunlight required for photosynthesis, and when one lockdown ends in one place, another lockdown begins somewhere else…

In each work, a drawn image on a sheet is combined with industrial elements in the form of metal chain-link fencing and plastic ties, forming a whole. Marcel Duchamp was the first to see art in the window of a hardware store – and art has never been the same since. Gretsky and Kats, along with other contemporary artists, attempt to break away from the inertia of the medium and the automatism of plastic movements in graphic art, moving towards complex shapes, turning a drawing into an object. The three-meter size of the works is not just a sign of the times, but an attempt to create a new, different correlation of viewer and object. The drawing as an art technique is now augmented with material, a device which helps and at the same time hinders perception of the work.

Beginning with customary drawing tools – a slate pencil on paper, the artists increasingly re-entrust the function of the pencil to the chain-link, combined with the black ties which transform into the strokes that form the image. Sometimes the intertwining makes them resemble a Rembrandt etching: the metal chain-link in the artists’ hands acquires a completely graphic nature. The gaps that reveal the bare foundation of the paper, may be especially dramatic – this effect was well-known to the Italians Lucio Fontana and Alberto Burri, who cut up and burnt canvases, giving their paintings a literally physical corporality. Unlike the masters of the “arte povera”, the multi-layer “flesh” of the works of Gretsky and Kats looks less vulnerable, although the depicted figures are usually nude.

Thanks to their academic training, Gretsky and Kats swiftly achieved virtuosity in their use of building and industrial materials. In this new series of works they return again to the foundations of anatomic drawing. As in their last project, “House for Sale”, displayed at the gallery in 2018, we see the inner world of their dwelling, which also serves as their workshop. It is impossible to draw an exact dividing line between creativity and the everyday, the lofty and the ordinary, artist and person, action and inaction. We can only take selfies and try to keep to the middle distance, including in the composition of works, where this is determined by the fixed size of the material itself. The visual effect is distributed and partially delegated to the chain-link.

In the new works, Walter Benjamin’s opposites of “mechanical reproduction” and “aura” are reconciled. The artists give the meters of industrially manufactured chain-link an individual face instead of mechanical uniformity – to explode with an expressive howl or huddle up with a baroque grimace. The light changes, and the perception becomes cinematographic: the vision grows cloudy, loaded down with time, disentangling itself from the intertwining lines at the bottom of the sheet, as if the chain-link literally served as a fence. The eye, looking at the enormous sheets in admiration, begins to understand that narcissism had a point, after all. 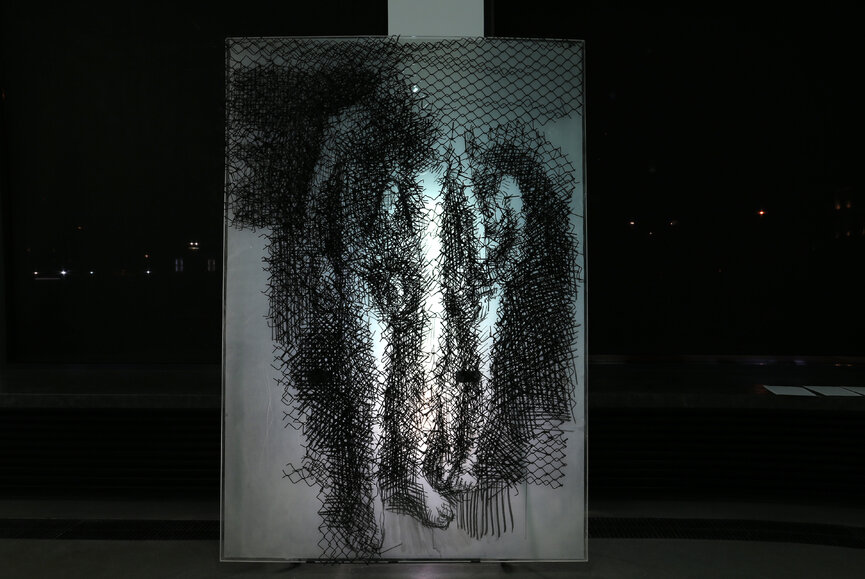 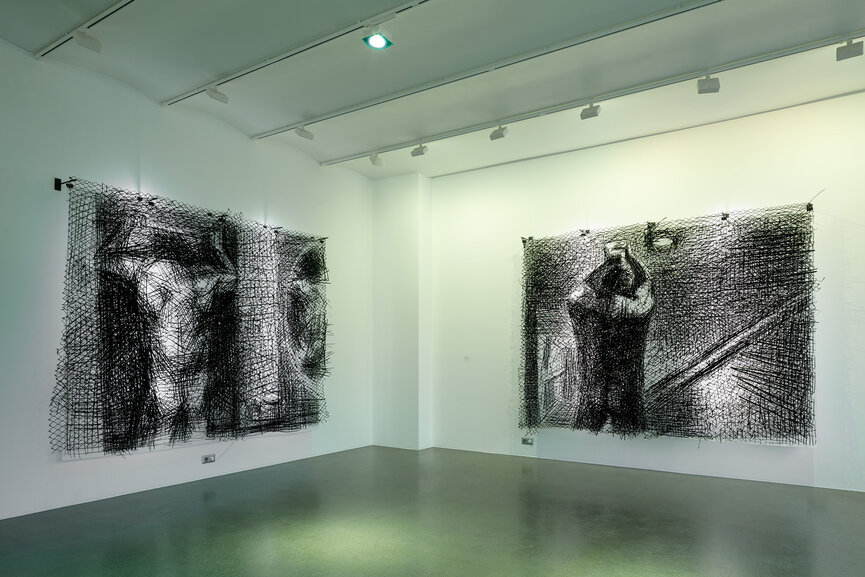 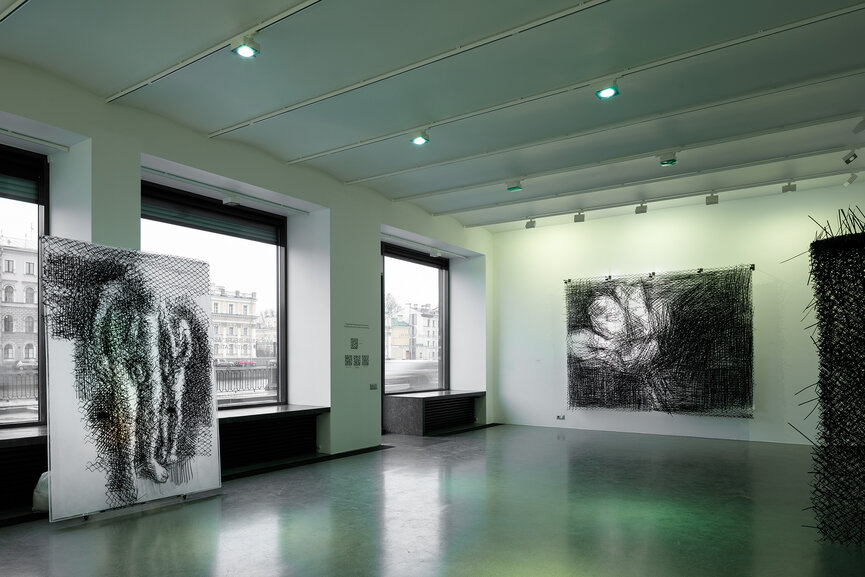 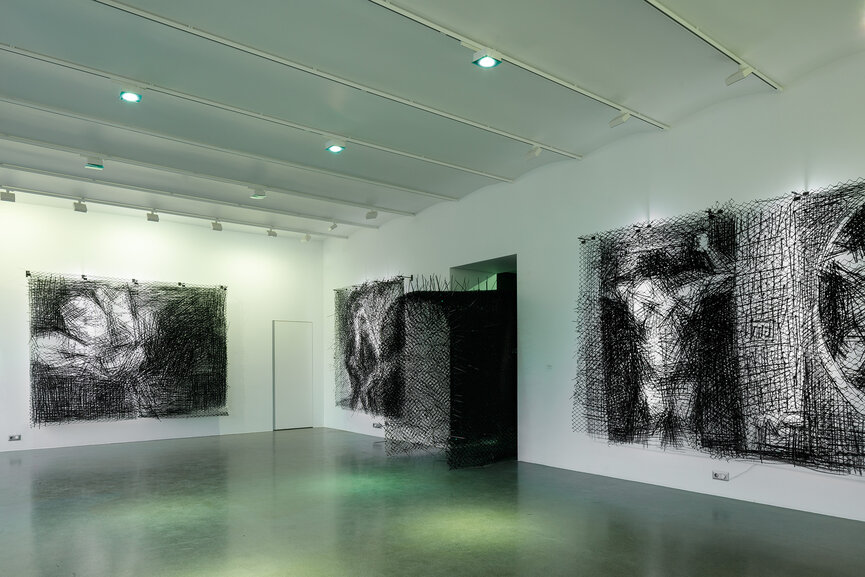 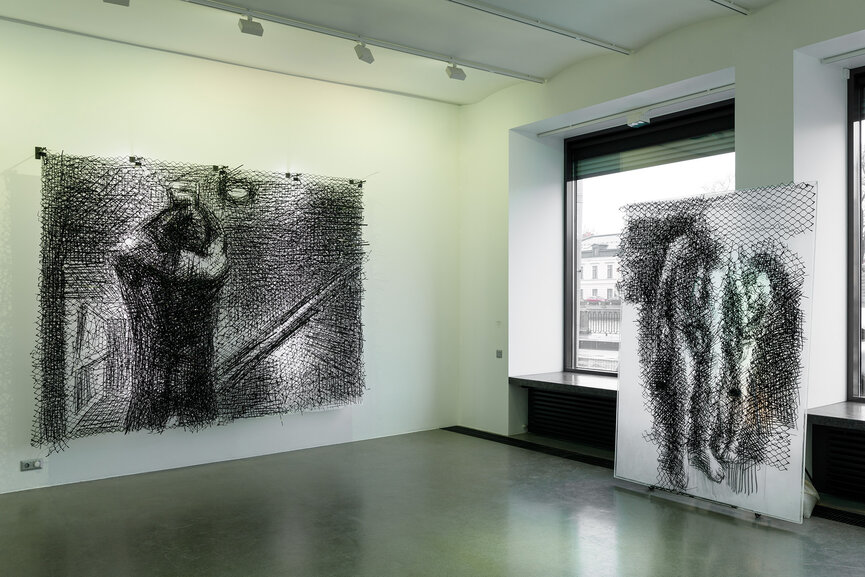 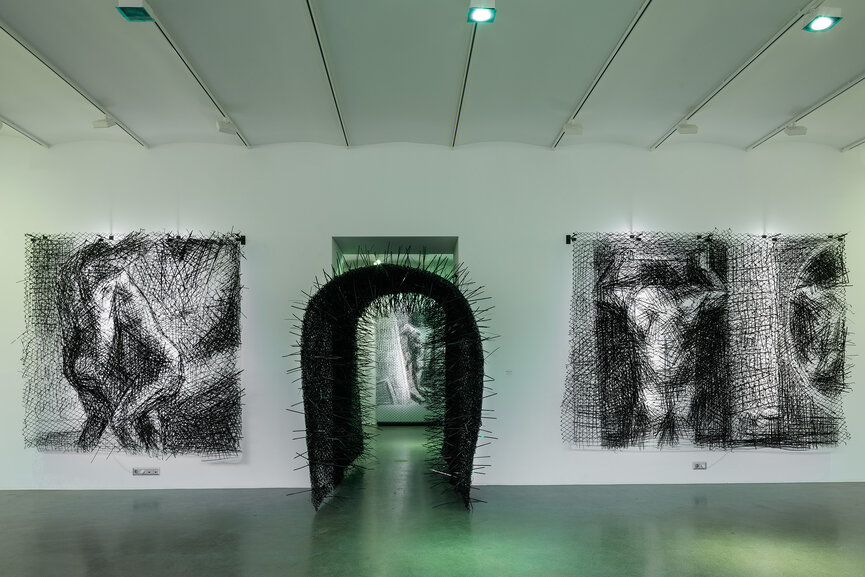 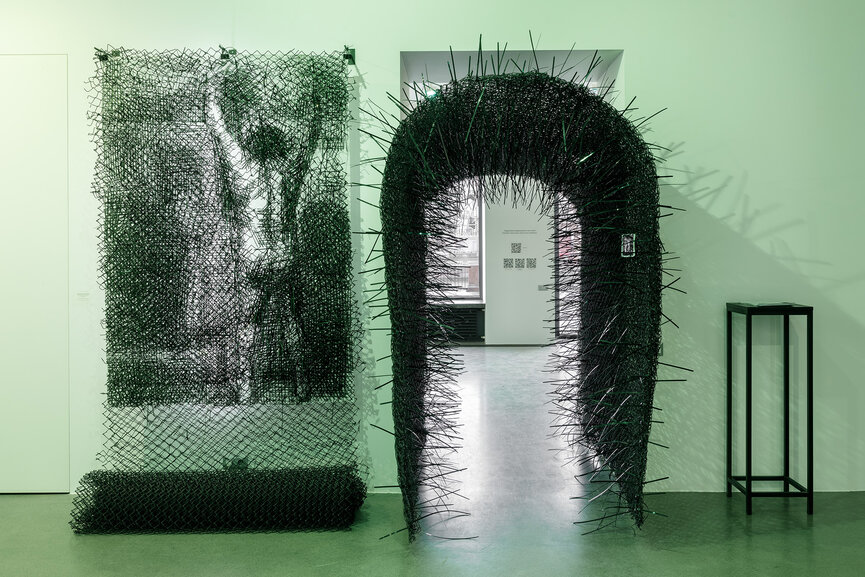 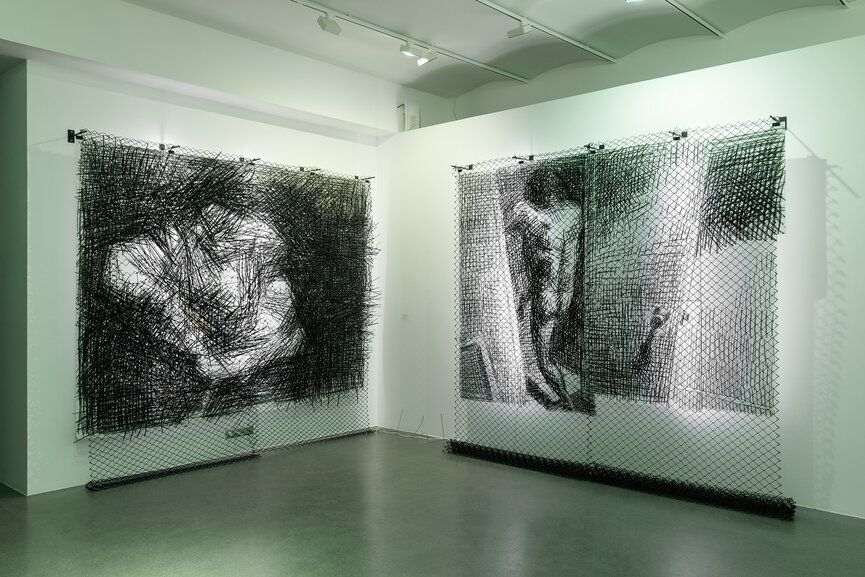 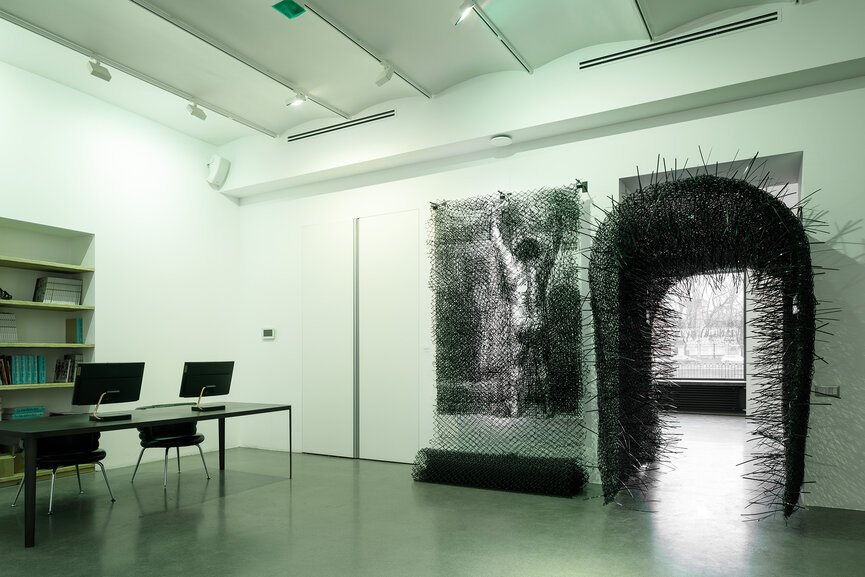 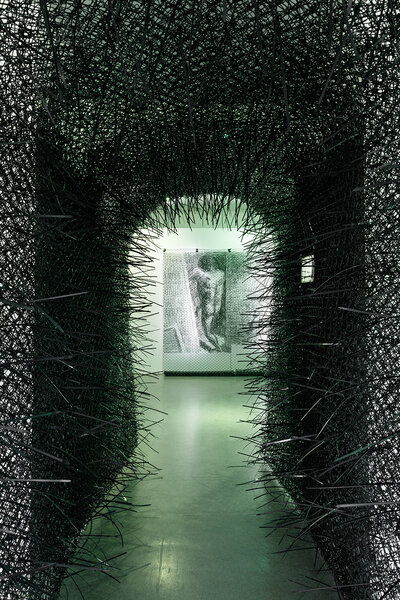 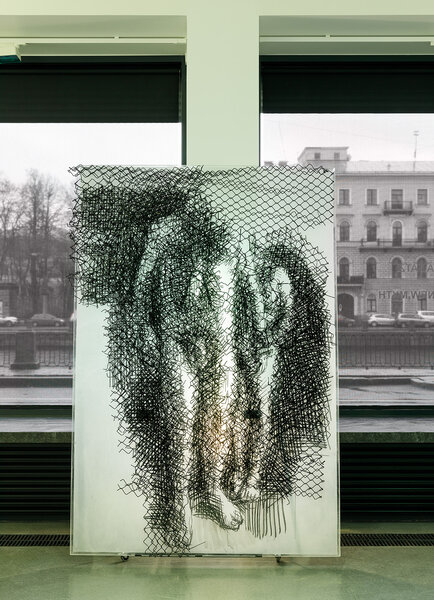 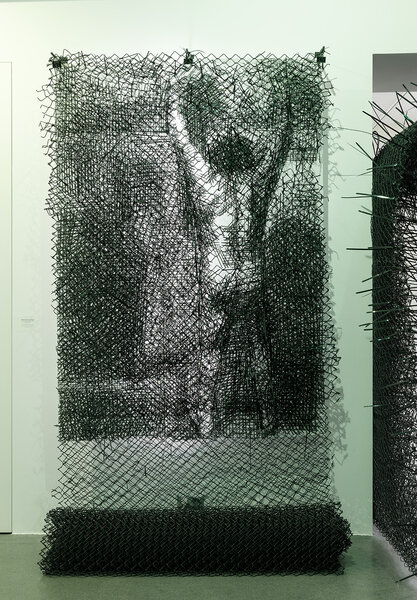 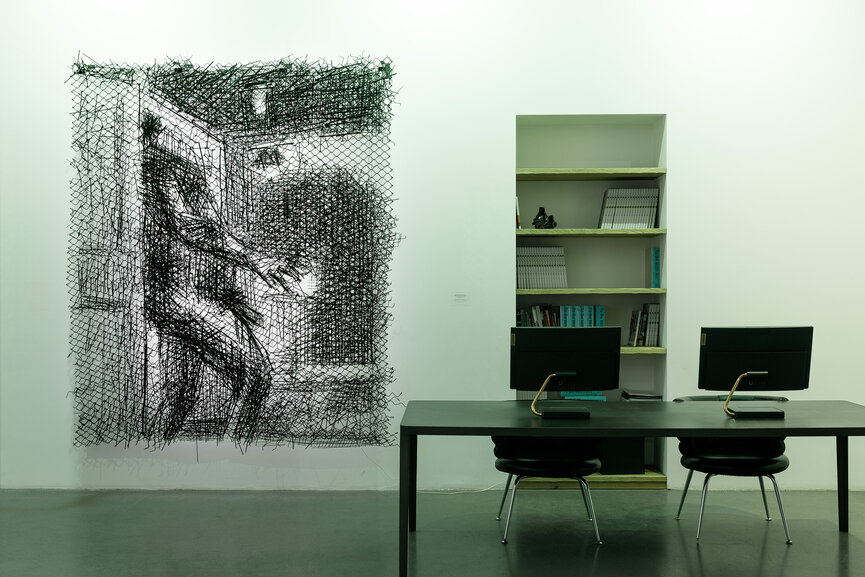 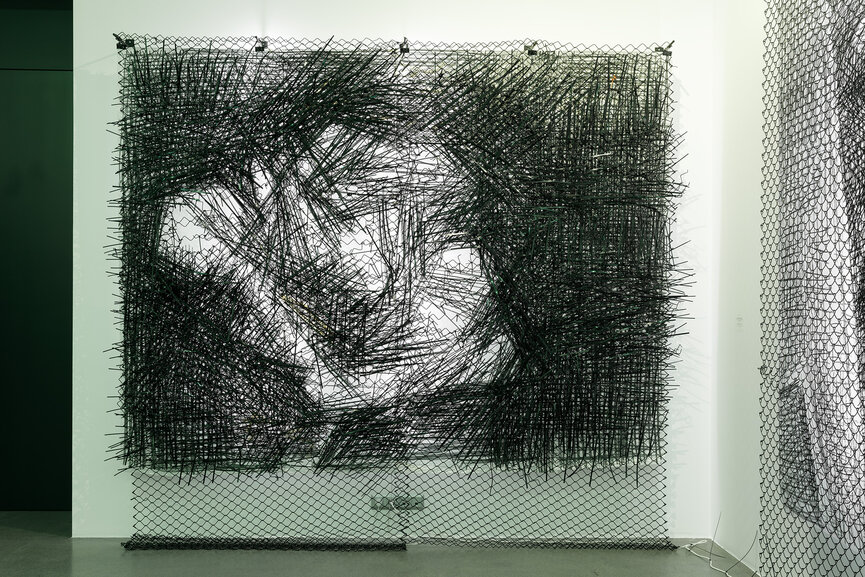 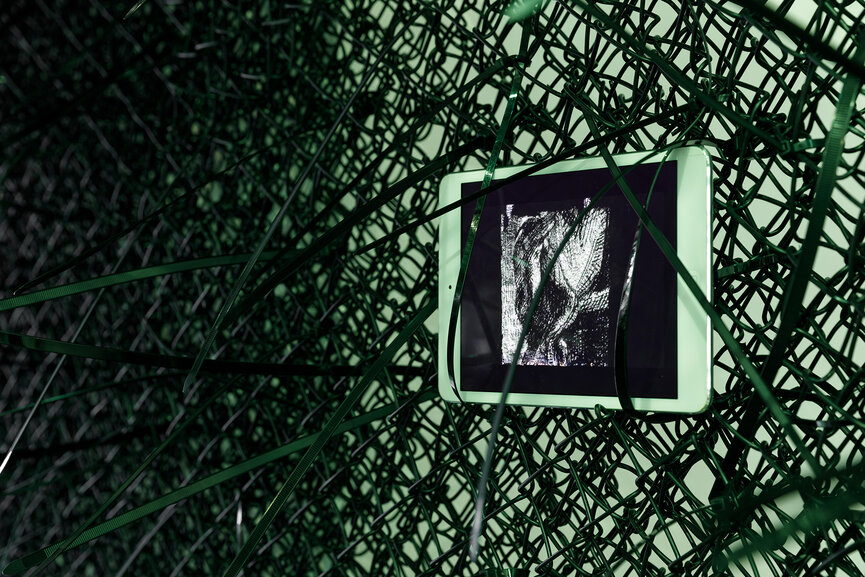 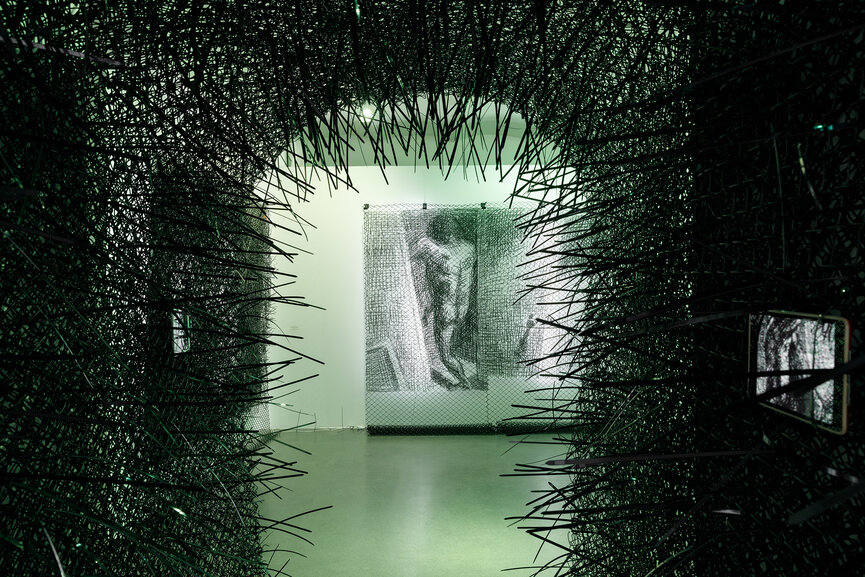 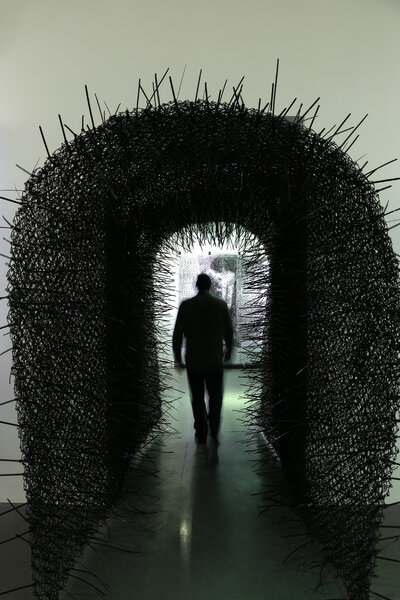 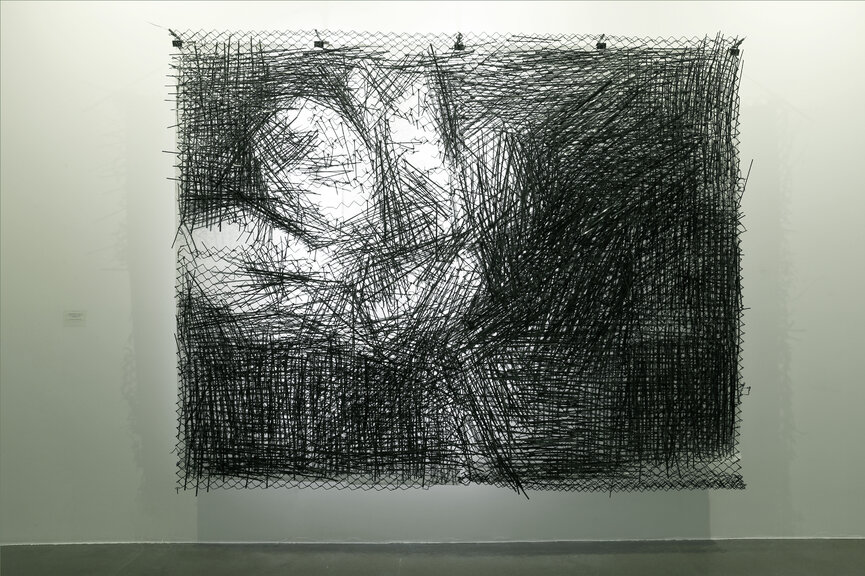 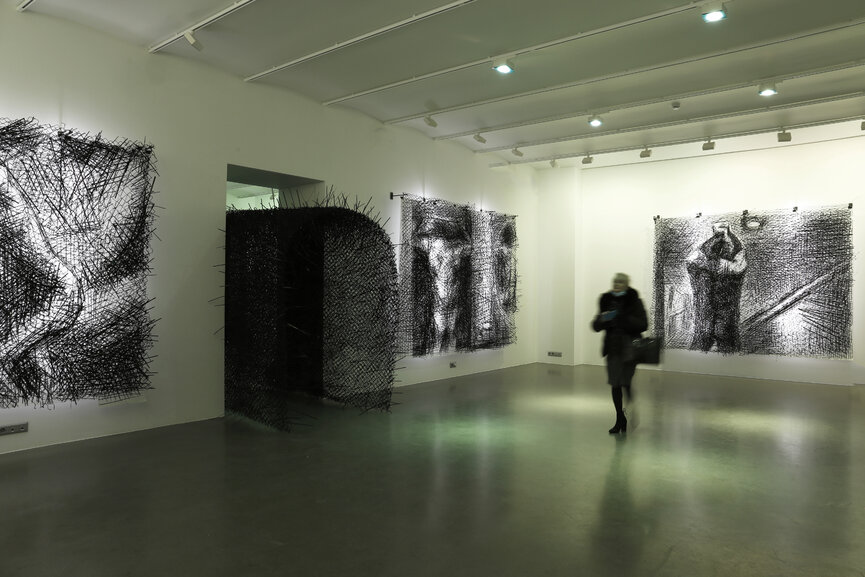 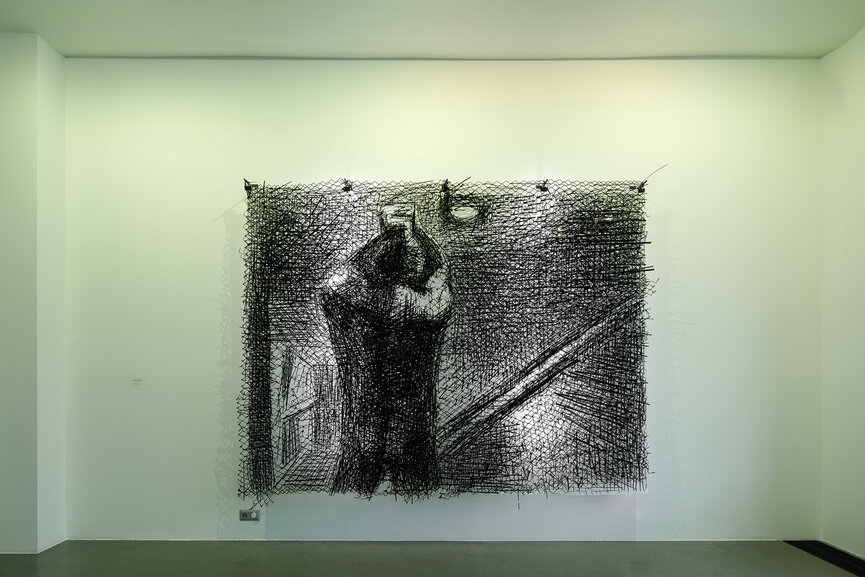