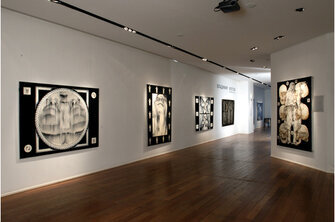 This Can’t Be Death

Notes about the art of the necrorealist Vladimir Kustov.

I wouldn’t call death the daughter of darkness.

This exhibition of Vladimir Kustov with which Marina Gisich Gallery has opened its new season, deserves to be exhibited in a more prominent, high status space such as the State Russian Museum, which could have benefited greatly from showing it. Nowadays it is unlikely to find an exponent like him whose intense paintings would be as captivating today as twenty years ago. The exhibition presents more than twenty large scale paintings created from 1987 through the present day.

Necrorealism, which originated in the early eighties, appears to one looking at Kustov’s paintings to be of a distant and well-buried past finally united with its original meaning from which it zealously arose. As always, we fell behind time. The monographic exhibitions of these outstanding artists should have been shown earlier when time wore away neither the newly rediscovered pitch dark “dead” meanings of theirs nor the macabre manipulations that they performed so fervently when mocking the dead.

The rare attachment of the artist to the chosen colour and plastic scheme as well as the restraint of his intense dramatic art create today a strong impression. It seems as if no one has ever influenced him, as if he was born being himself in the settlement of the big city under the grey radiant firmament. This by the way is a very St. Petersburg quality – a human-shell who is generating himself somewhere from his inner core.

To understand the art of Vladimir Kustov, I always wanted to find out his literary parallels (something similar to his humanitarian roots), if they do exist. A lot has been written about the “death loving” chastooshkas of Oleg Grigoriev which were circulated in the country in the eighties and were distorted from the original work of the poet to such extent that one could scarcely recognize them. As I remember there was a lot of fervent “cadaveric” meat of the children as well as their parents in them. Bodies that have suffered absurd deaths, lost their phalli were subjected to mocking as in a kid’s horror story. While turning into a dead inverted joker in the verses, they haven’t died during the length of this process but became a funny word instead as they have performed foolishness in the presence of others, a clumsy clownish kulbit. There are also masters of the Russian literary macabre writing – the prosaists J. Mamlev and V. Sorokin. No one ever actually died in their work as they did in Tolstoy’s or Dostoyevsky’s and is it really death when a vintage Chekov-Bunin’s company is meticulously treating themselves to the fried lads and lasses in the delightful summer day? Is it really death? It is well-dressed verbal food. However, at times literature can petrify you. I recall the neofolk “Songs of the East Slavs” by Ludmila Petrushevskaya, where in the post-war times the unknown women were haunted by their dead husbands who rose from their graves as if a certain, inscrutable tradition that was strict and unquestioned was broken as those who must have been in peace, lost

it and became eternal exiles. This is astonishing literature created by the peculiar Russian memory about neither the personal grief nor the mysterious event that had supposedly happened to the relatives or neighbours but by the other magic, bearing no apparent relation to the solitary human mundane life. Is it perhaps the magic of numbers such that are not understood by the

simple hearted human intellect? We are the ones, who haven’t counted our dead, aren’t we? It’s not because we are weak willed scoundrels but because the numbers are so high that we constantly lose count of them. It is still unknown how many millions called up for the army (!) didn’t come back from the front and the camps of the Second World War. There is no exact answer. It seemed to me that the writer depicted some unprecedented Russian causation, revealed the essence of Russian mysticism. She exposed how the density of the dead penetrated the deficiencies of the living. I think that Kustov also sensed it. Biographically it is understandable since he is just one generation away from the “western Slavs”. It is not a matter of the dead gerontocratic background of his youth but of the precious mythology, which almost no one remembers but which is omnipresent.

In every painting presented in this exhibition a certain kind of drama is implied which could take place on the stage. Its criminal subject matter has a beginning similar to the “Slavic cases” of L. Petrushevskaya. By the way, this idea is confirmed even by the titles of the canvases that are very apt in the literary sense as if after their contemplation, a coherent story of the artist would follow about the events that produced the pictorial “knot” of the horrid “The Fallen out Country Visitor” or “Sashok”. For painting the following subject is exceptional – it is borrowed not from the visual non verbal experience of the colour tension but goes back to the metaphysical details of “the scientific epistemology”. It is bookish in my opinion, taken from the textbooks and atlases on surgery and originates from the most elaborate of its criminal sections. As if under the dusk cruelties for almost two decades represented by the artist with astonishing persistence doesn’t clear the aura of a childish, relentless curiosity. There is an ingenious fervour in it when the artist succeeds once more in managing to overcome an immense cowardice before the darkness, the horror stories and eventually death. The impressions about the ones whose information is obtained from the chronicles of the drowned men of the past week, the forgotten in the loops victims of hanging, the unburied burnt men, and other various household life. What is curious, V. Kustov interprets death as a speculation; it is always disgusting, immoral, unnatural and ruthless. But is it death? The stages of the rapid decaying scanned by his attentive brush, in fact – the apotheosis, to which the objective reality is capable. This is not death, this is vitality turned inside out. I recollect the impressions made on me by the necrorealistic movies. By means of excessive fervour, zeal and seriousness they exerted a truly Homeric influence. I always at some point burst out laughing happily despite mocking absurdity and total ominousness. The high absurdity and grotesque seemed to have been invisibly printing the subtitles: “This is real art.” It was impossible not to read.

There are plastic features of Vladimir Kustov’s painting that are speaking the “dead” language more relentlessly and deeper than all the subject appearance. It is on this neoterritory that he is particularly deep in knowledge and interpretation. The colour scale produced by the unpicturesque grey appears to speak of the plurality, circulation, a spasm of individual experience before the discovered monochromatic multivariate colour. There is something in his colour scheme that causes neither resentment nor compassion. It is paradoxical but I think that in this particular zone one should look for that “something” that makes the art of Vladimir Kustov necrorealistic. His assiduous monochromatic art expresses unique colorless dimensions that are detached from vital durations. There, yawing with their return splendour are the convulsions and spasms of the last edge of existence. A writhing body heroically resists its non-existence, even when it decays and mineralizes; it is pompous, belonging to the special pathos of the irreproachable beauty. It is real baroque with its visible cheerful hymns. Kissed million times caskets and shrines with relics. There is imperishable carrion there; decorated with the most dear that brings deliverance to the believers. In fact even the ornaments used by the artist having borrowed their primary symbols from the instructions on various dangerous technologies, remind me of the church embroidery; which is used to cover the remains of the martyrs, trappist monks and passion bearers. I saw similar ones in Kiev Pechersk Lavra at the very base of the underground passage foundation.

There remains one question – what to believe in. Fortunately, it remains unresolved. 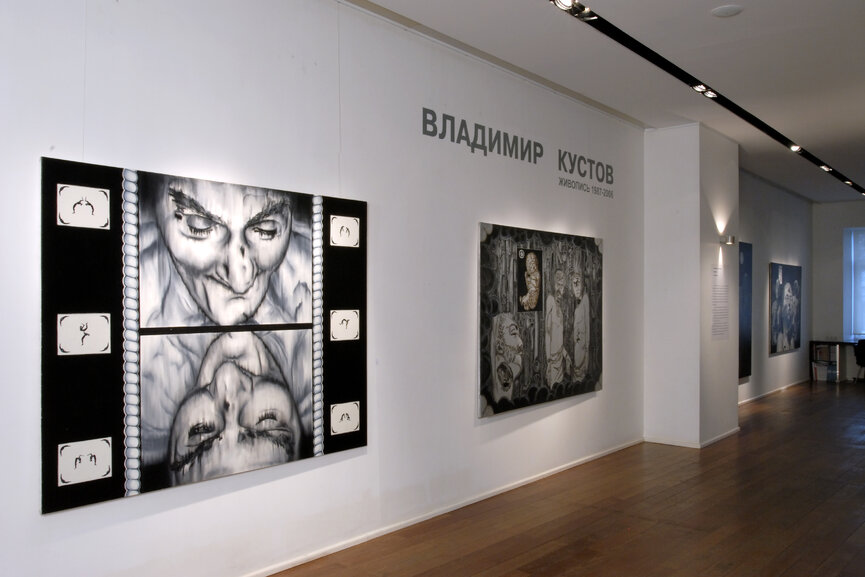 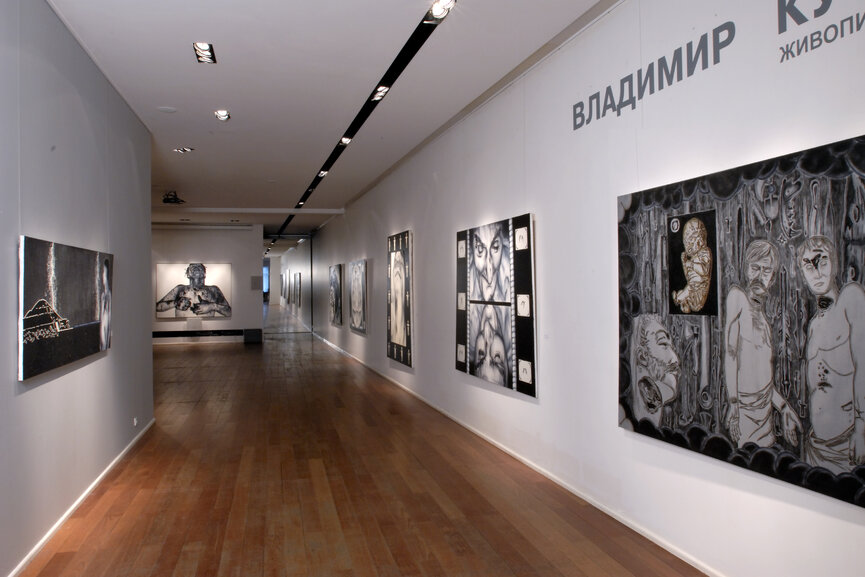 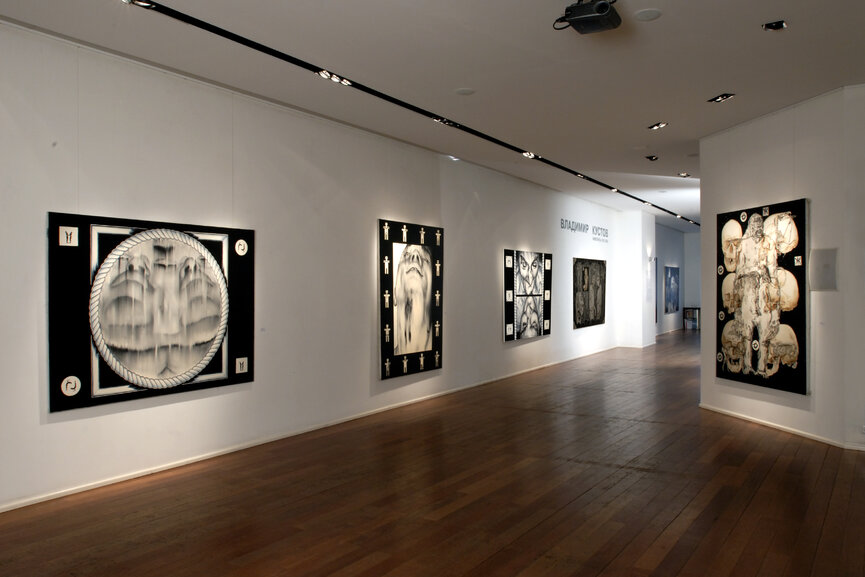 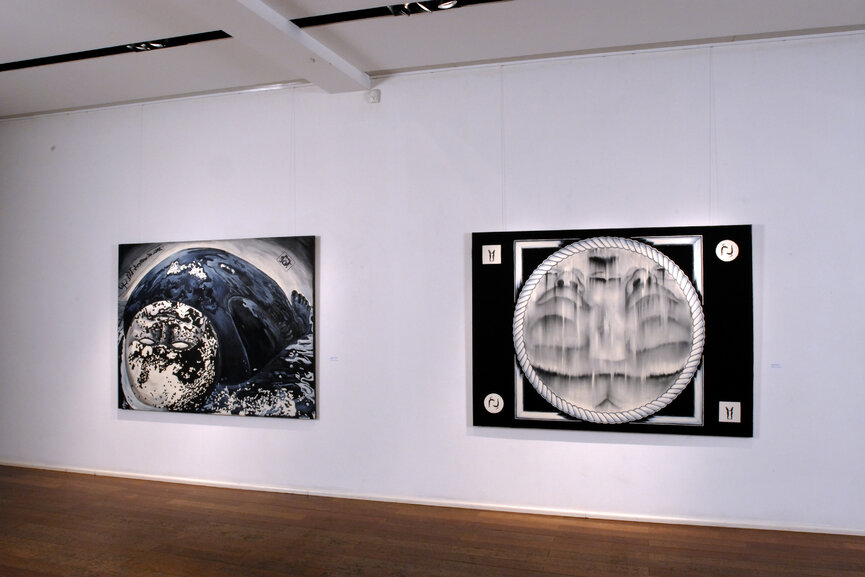 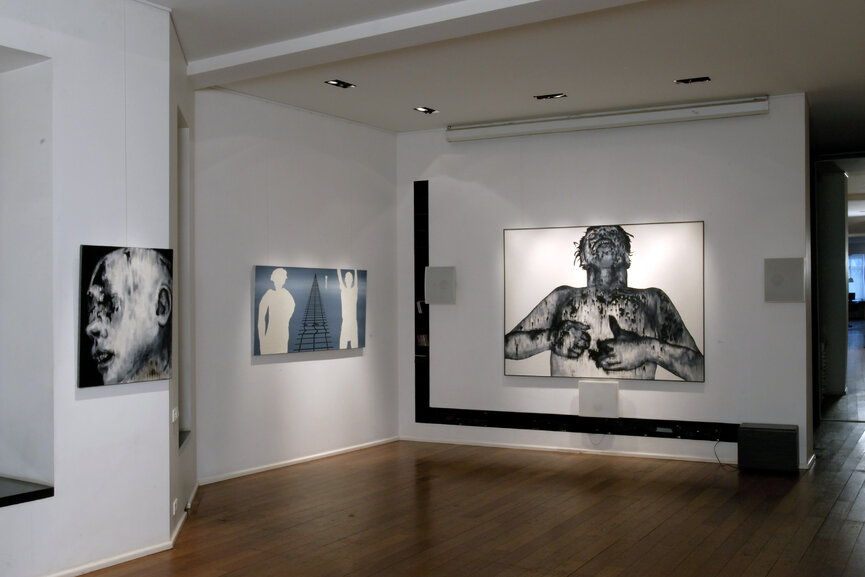 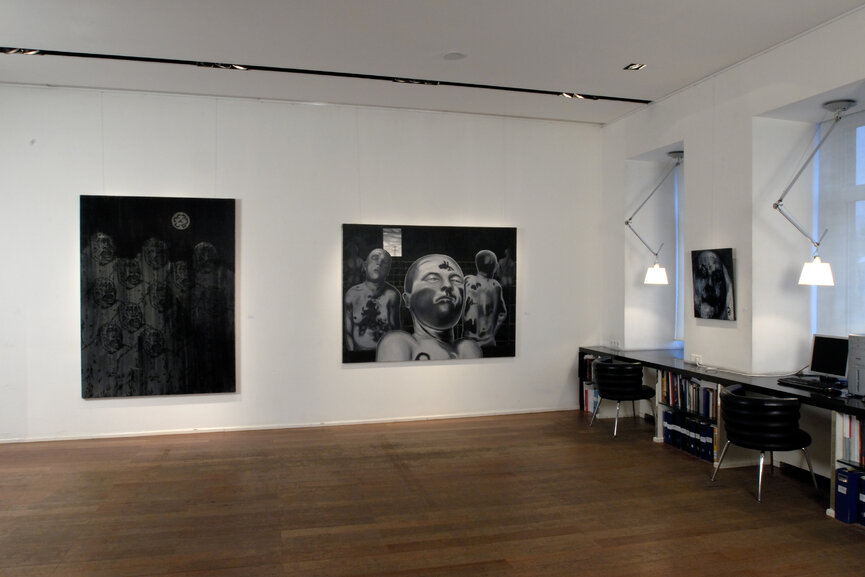