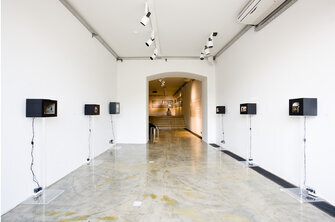 Under the shot through field cap

With its exhibition “FROM INSIDE – FROM OUTSIDE” the famous family/creative union of Marina Aleksejeva and Boris Kazakov defines the model of the world – of “the house where we live”. The old “Moebius” model of the Soviet cynic Oleg Grigorjev “in a cage like on a branch” has gone. And we exist in the artistic world, with its dual opposition of “external-internal”, where the first one has started to prevail against the second one so much that it has transformed into a neutral, uninteresting surface. Creations made exclusively for demonstration; communication by means of the outer shell only – by means of a “person”; the policy of “Potemkin’s villages”, etc. – all this continues to work but does not intrigue at all. This empire of facades is opposed by the world reminiscent of the early Christians’ catacombs, partisan caves, children’s “secrets” and windows of the toy-shops. In outward appearance, Marina’s objects opening the exposition go back to the theatrical scale models of scene boxes and doll houses that appeared in Europe in ХVI century (the oldest of the extant ones is considered to be the house of Petronella Ortman from the Royal museum of Amsterdam – the city where windows are traditionally not curtained). Marina, the owner of the famous “Country life” gallery situated in an old country house in Kolomagi, began to create her “interiors” in the end of 1990-ies when in the communal country everybody started to acquire private dwellings. Dozens of interior boxes of the artist (cathedrals of different confessions, various communal and private spaces) are secluded feudal sectors for production of new meanings, the world that lost totalitarian dominant after “schizo-revolution” of perestroika. Dwellers of these interiors have gone somewhere and left their houses for our observation and tender emotion. Although these are, perhaps, spaces of dream where man has never set foot. Or this is “another world” of the mystic Swedenborg, where angels are the same postmen, bakers and bricklayers that in this world.

With the lapse of time, as the houses of the American science fiction writer C.Simak behind the windows of which alien universes open, the houses of Aleksejeva acquired “double bottom” – moving pictures appeared in them which commented on the intrior created by Boris – an artist and a film director. This time we can see 7 interiors with dynamic perspectives: a gallery with reviving pictures; compartment of a railway carriage, with landscapes racing behind the windows; factory floor with functioning machine, as well as the Oval cabinet of the White house, a museum, a prison, datscha. This time Marina herself created sound and image.

The hall with Boris’s exposition contains hundreds of “9х9” framed pictures, shooting material of his new film – “FISH”. Kazakov, famous for his unbelievable meditative diligence, made movies where he, with his own hand, painted every frame of the film (“Koly” 1999). The main motif of the director-painter is cheerful pantheistic flow of substance – transformation of one image into another (“A dog” 2001). The last film required more than 3000 pictures made by hand.

Exposition of the creative duet is united by the object essential for the exhibition – generalized image of a house with five windows and a door. In every window its own life is zipping along or crawling – the curtains closed, then opened, somebody has been robbed… This installation turns into an allegory of one of the central (from W?lfflin to Castaneda) and urgent problems of the last century humanity – vision. Something unbelievable is hidden in ordinariness, opinions regarding things that seem neutral in outward appearance appear to be totally incompatible – everything depends on the point of view and experience of the observer.

Once Oleg Kotelnikov, following Tschukovsky whose “pigs started saying miaow, cats started saying oink”, divided artists into those who say “miaow” and “oink” (it must be mentioned that there is still such art in St.Petersburg where neoclassical heroes are silent and only sniff, or where machines are grinding). The art of Marina and Boris, apparently, is rated as “miaow”. And this “miaow” is the “miaow” of the Cheshire Cat whose fierce smile promises much good. 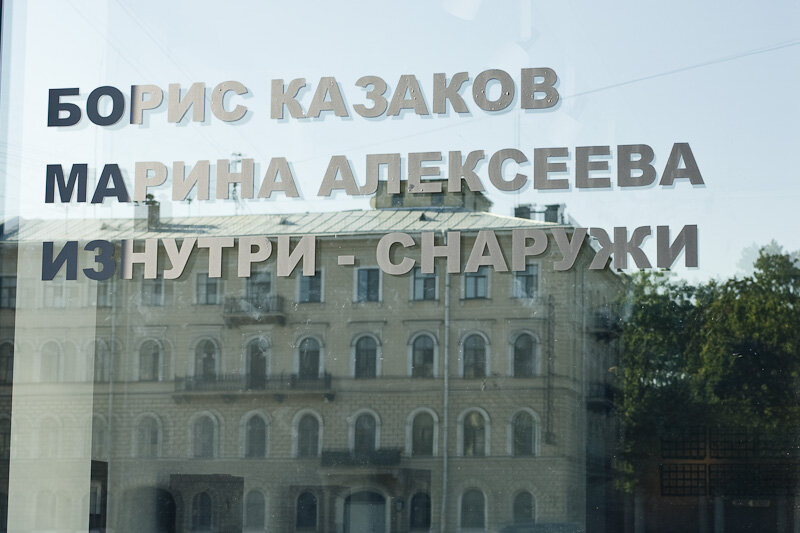 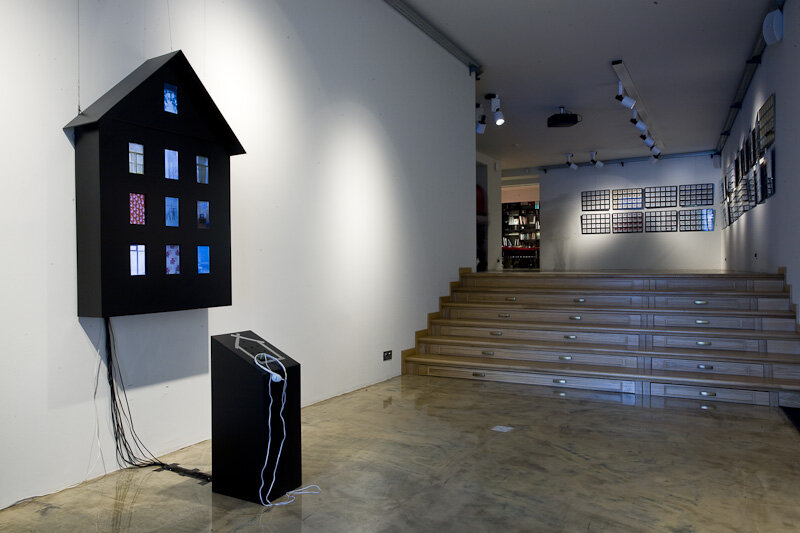 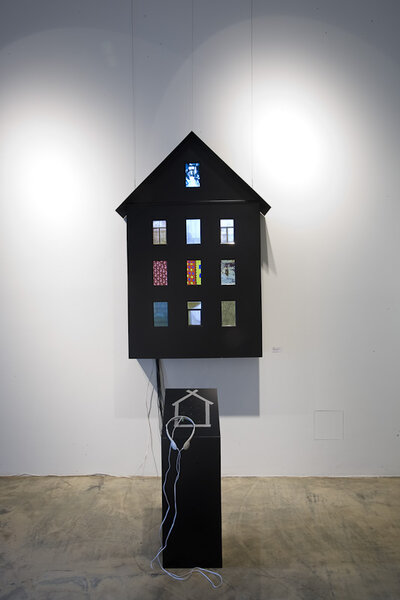 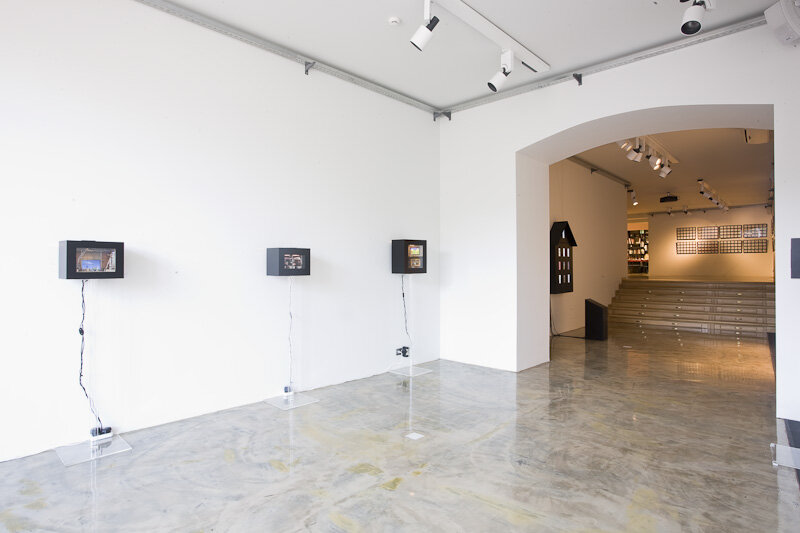 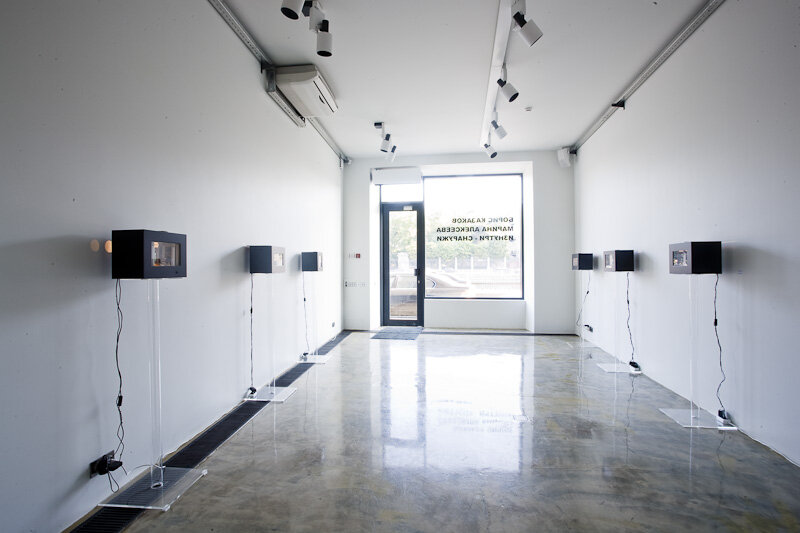 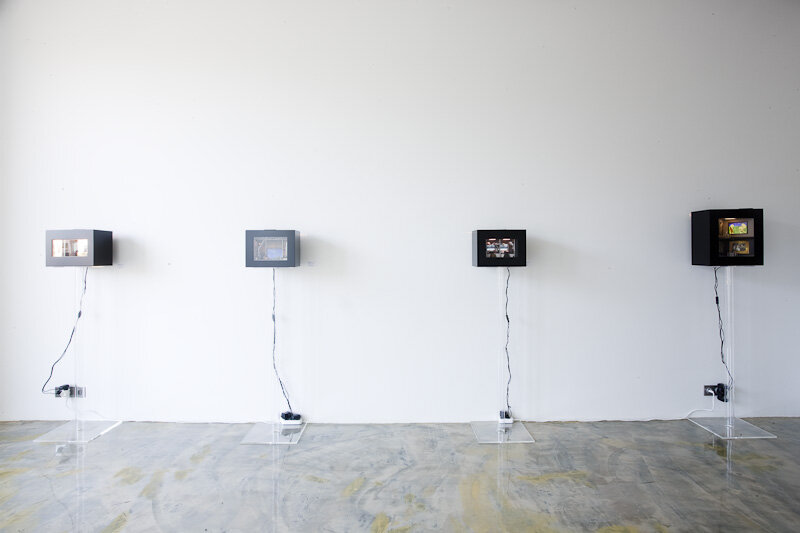 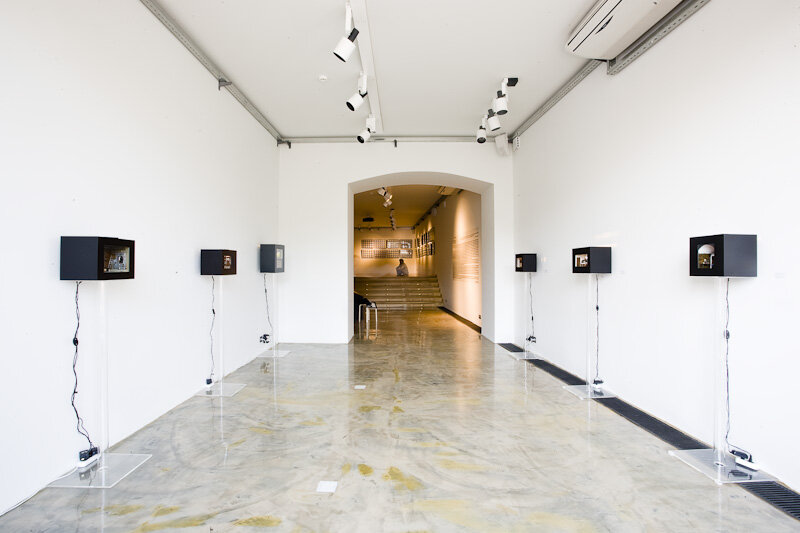 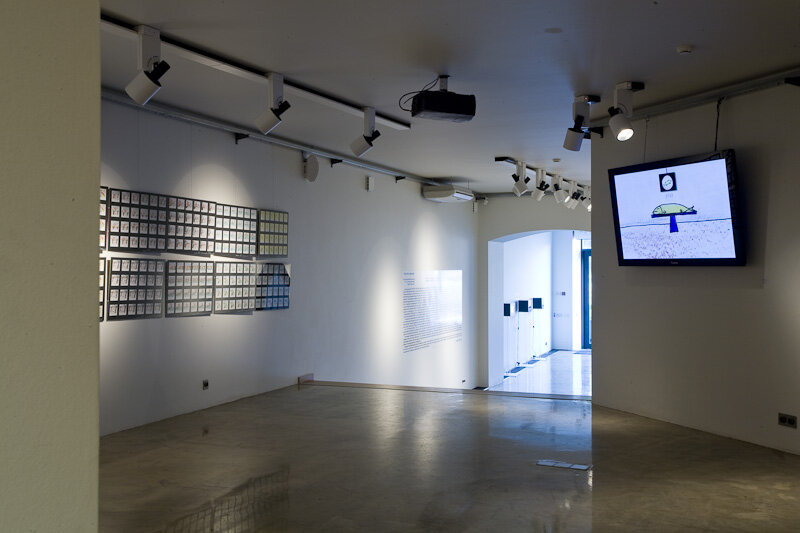 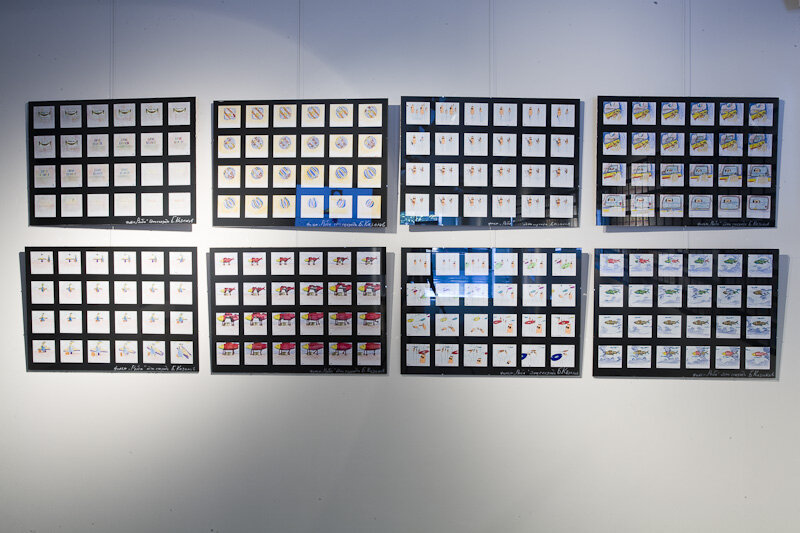 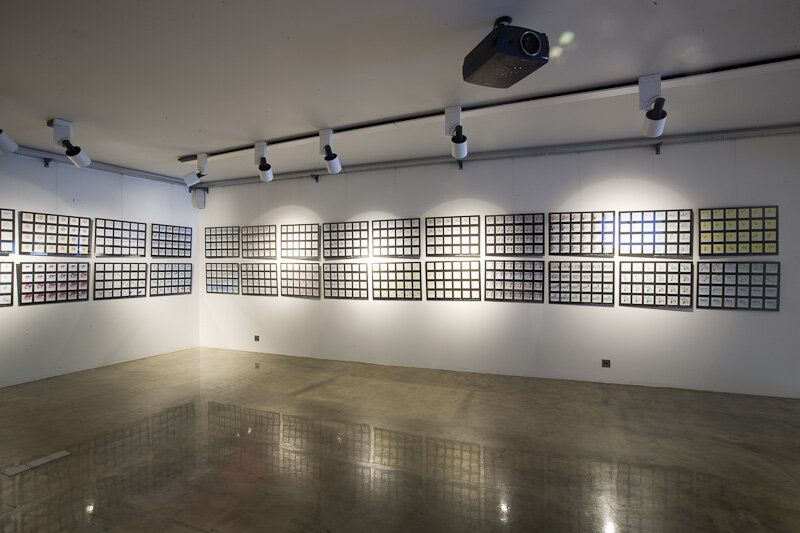 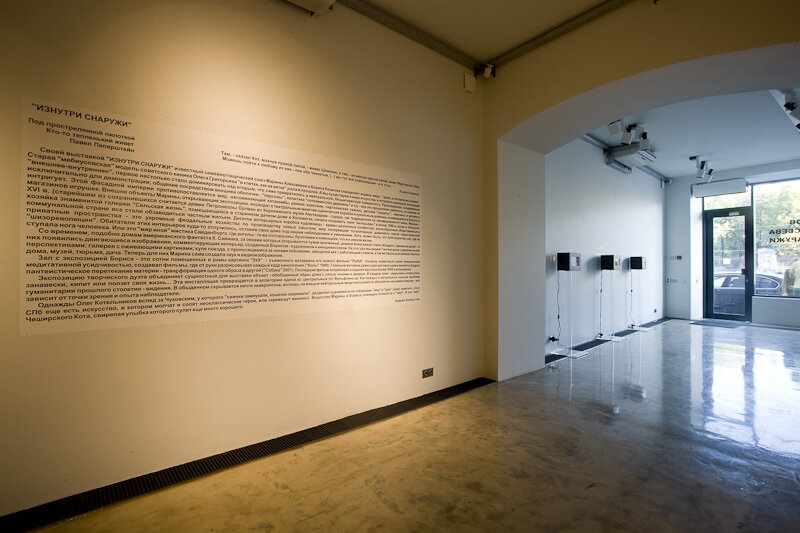 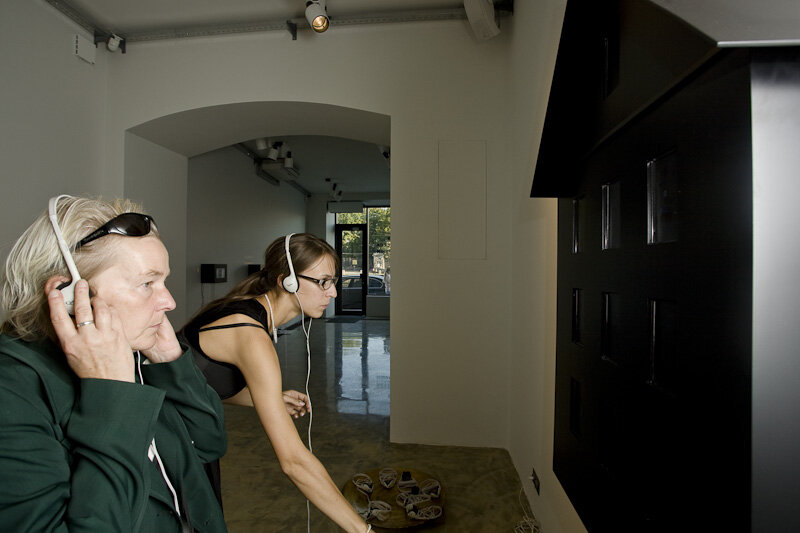 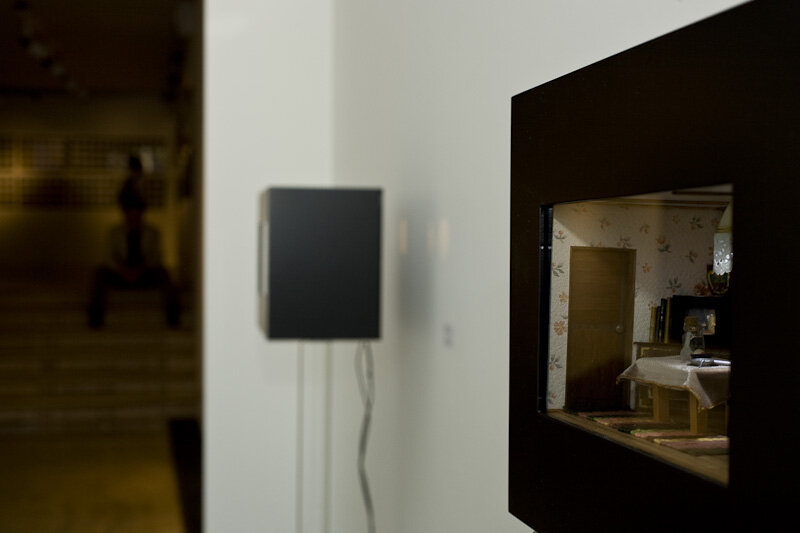