GREGORI MAIOFIS (b. 1970) revives the almost forgotten bromoil technique, which achieves the quality of a painting. Photo emulsion is saturated with oil paint, and the print acquires the painted softness of sepia. The artist turns his photographs into monochrome paintings.

Maiofis selects large-scale painting formats uncharacteristic for photography and makes a print on canvas. What is more, the reality that was once so sought after to capture in the camera’s lens loses its documentality in the artist’s works. His pieces are metaphoric and allegorical, as in the Proverbs series. In this series, as in Aesop’s fables, elephants, monkeys, and bears inhabit our social world, where they play the piano, dance, and pose with a ballerina.

We may say that Maiofis embodies Aesop’s language of proverbs not only in the plot, but in the technique itself. The artist speaks in the language of photography, but he tells his story differently, in a roundabout way, using not only the figures of animals but painting effects themselves as allegory. 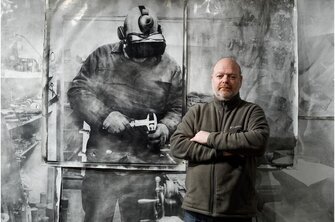