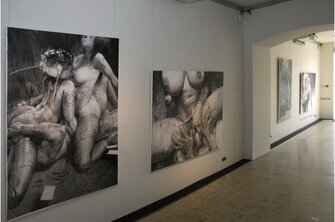 Sexuality didn’t have much luck in the epoch of the formation of structures of dominance that resemble modern supremacy. In caste societies, and later in class societies, the consumption of sexual pleasure depended not only on the individual traits of a person, but also on that person’s place in society, which researchers of class structures have convinced us is nothing other than a never-ending war between different population groups. For this reason, in class societies and particularly in despotic ones, the availability of sexual entertainment was always very limited for the majority of the population. In contrast to the sensation of hunger, sexual feelings can be repressed without leading the individual to death, as occurs when limiting access to food. When we consider how the vast majority of humankind has gone hungry over the course of its entire history and is starving still, we can understand how torturous hunger is and how dangerous it is to life and health. We cannot say this of abstinence, which has far less dire consequences. This is why people prefer to deny themselves sexual pleasure, if they are threatened with hunger or an even more severe punishment as a repression of such pleasures. It is easier for a person to give up sex than it is to quit smoking. Sexual repression and humiliation is extremely effective in subordinating the individual. It is not for nothing that ancient Egyptians raped their captives, and modern Mujahideen do the same. But in the world’s most modern army, the American armed forces, sexual abuse, sexual humiliation, and sexual torture are scientifically developed by intellectuals from the Pentagon as the main weapon for subjugating captured enemies. This is why images that arouse sexual excitement, which were banned for centuries, have been (and still are) subject to the same repression as sexual feelings in general and sexual pleasure, which at the same time are the source of energy for building a civilization, as Sigmund Freud shockingly discovered, and which is still news to this day. Nevertheless, the periodic control of sexual behavior and its visual and verbal representation is weakening, and void of taboo, intimacy loses its spice.

It has often happened that during revolutions and before them, sexual revolutions – periods of sexual promiscuity – preceded and accompanied social upheavals and wars. This was the case even very recently – during perestroika and the redistribution of state-owned properties in the 90’s, when all restrictions were lifted for the sake of fast and uninhibited capture of material, moral, and symbolic wealth, when unlimited and chaotic consumption of sexual pleasure became the symbol of the superior status of the new “owners of life” and their lackeys. For a time, sex became one of the most important topics of social discourse, but quickly disappeared as it became trivialized, particularly after pornography appearing from “out of nowhere” appropriated the symbolic area of sexuality, the human body, and their representations. The primitive anthropology created by pornography does not allow for the creation of other variations of it, which are more subtle and creative.

For his new series of paintings, Kirill Chelushkin has taken the most banal “archetypes” of pornography and attempted to transform them into true art. 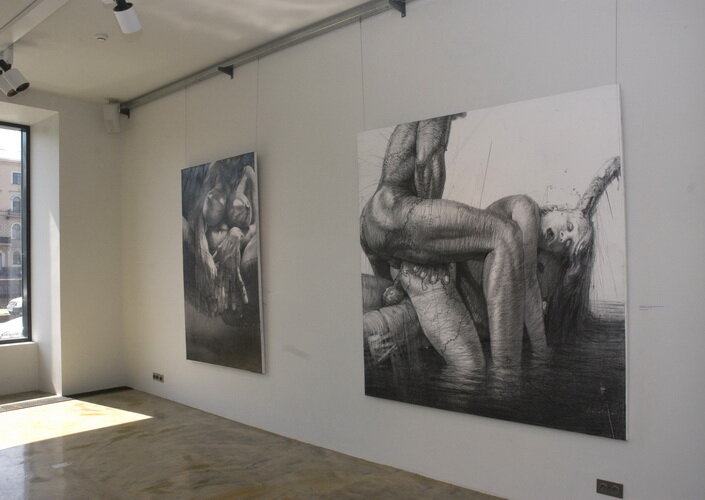 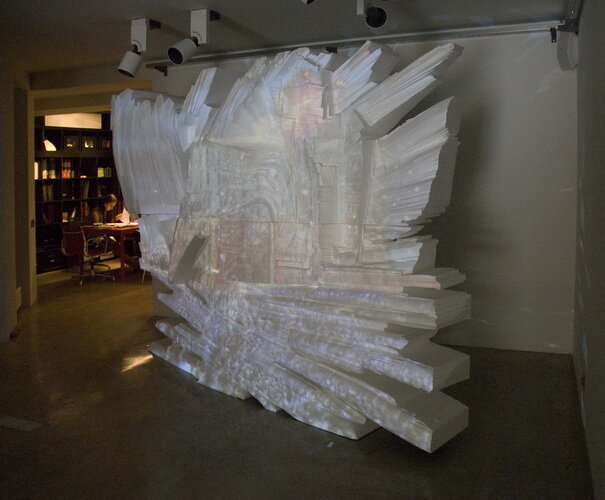 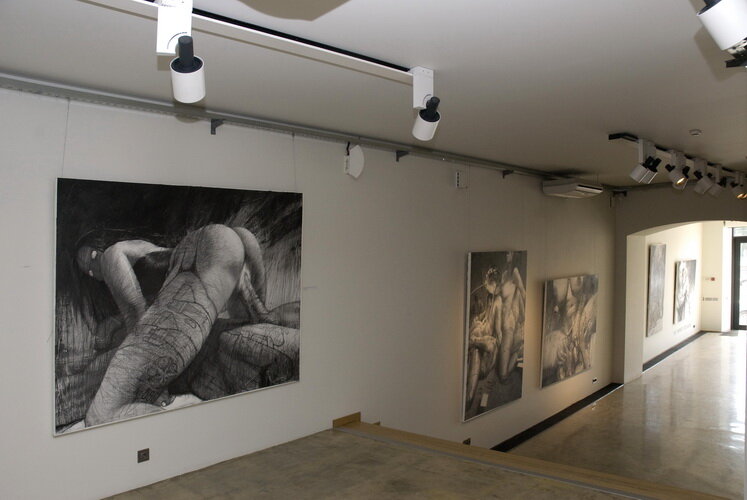 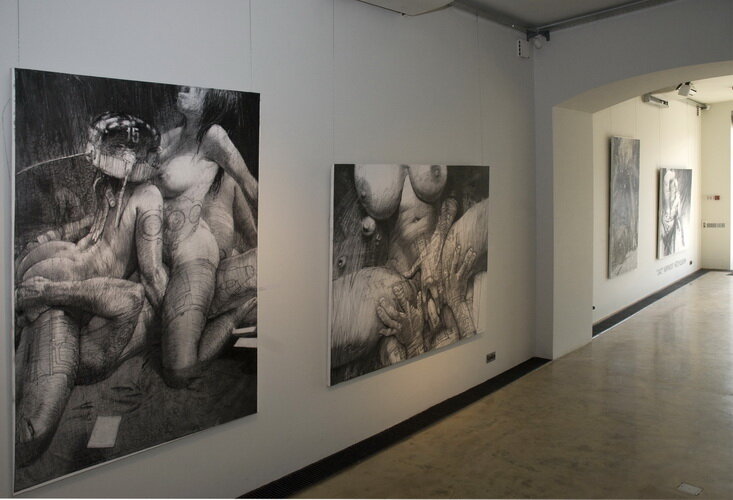 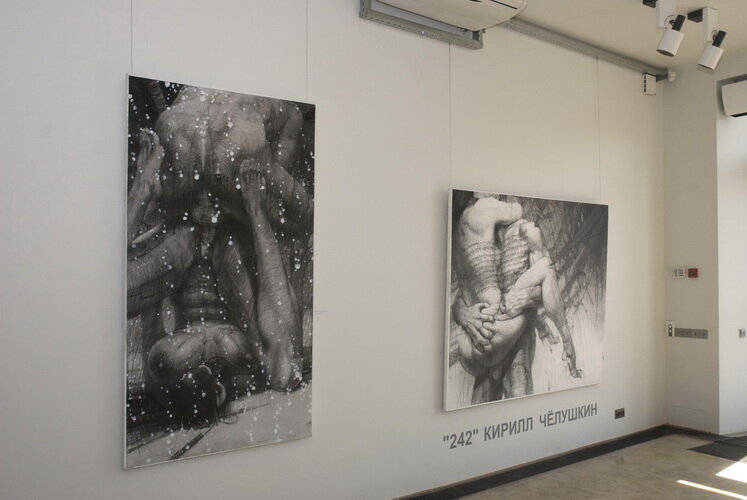 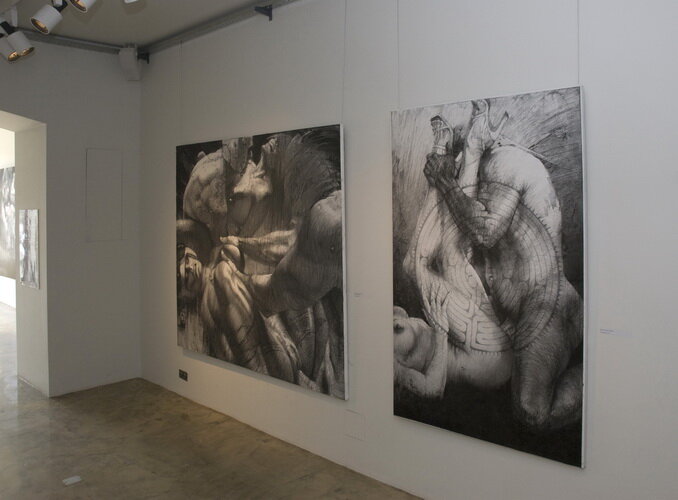 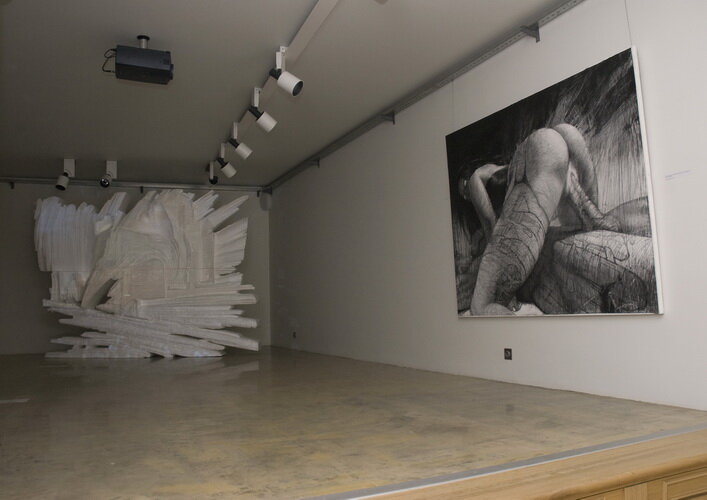 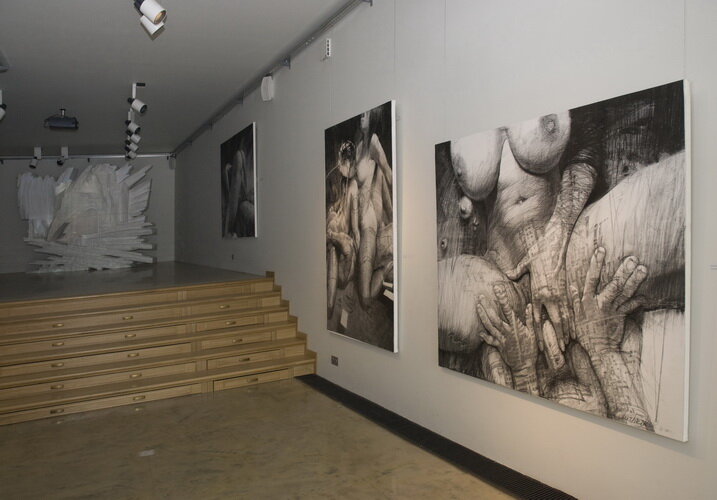 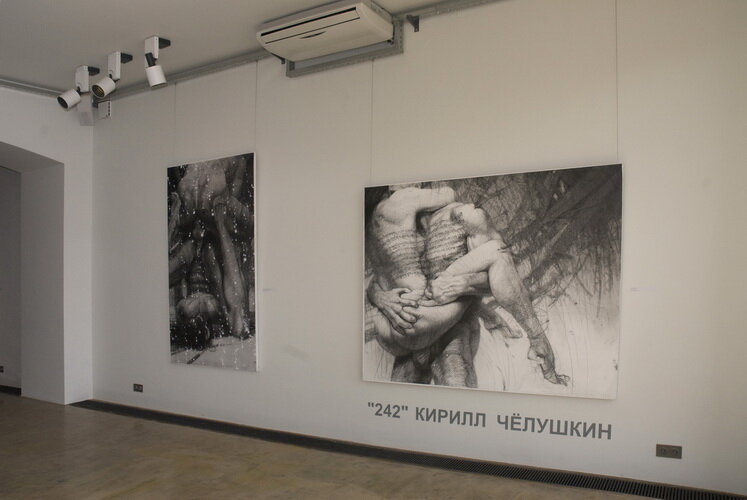 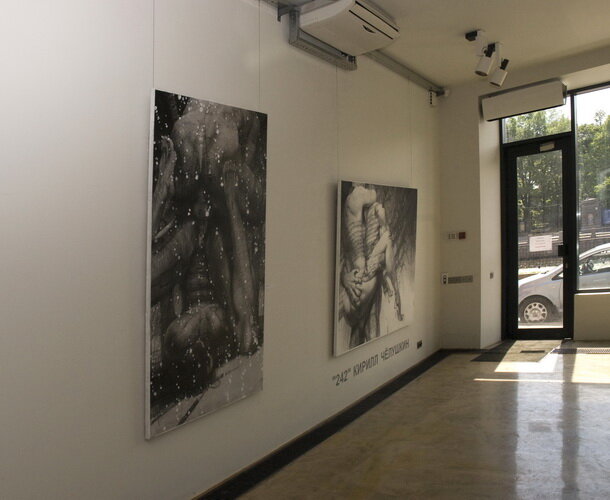 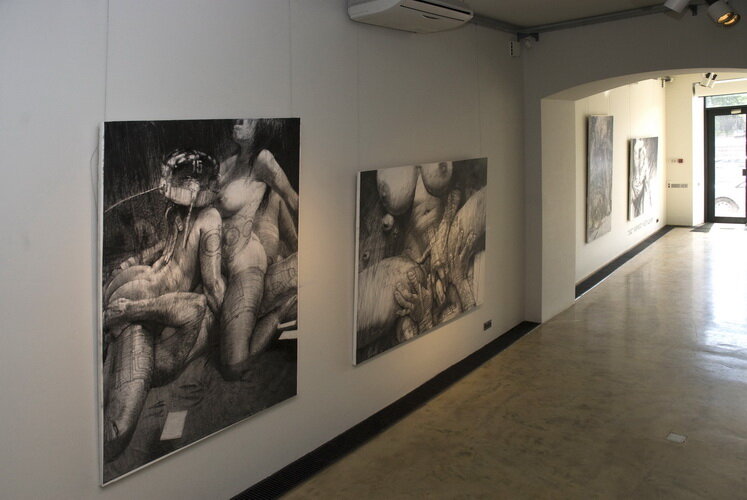 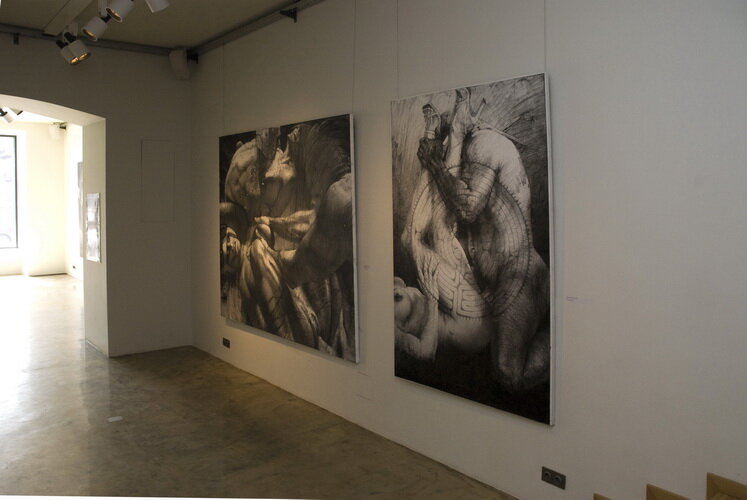 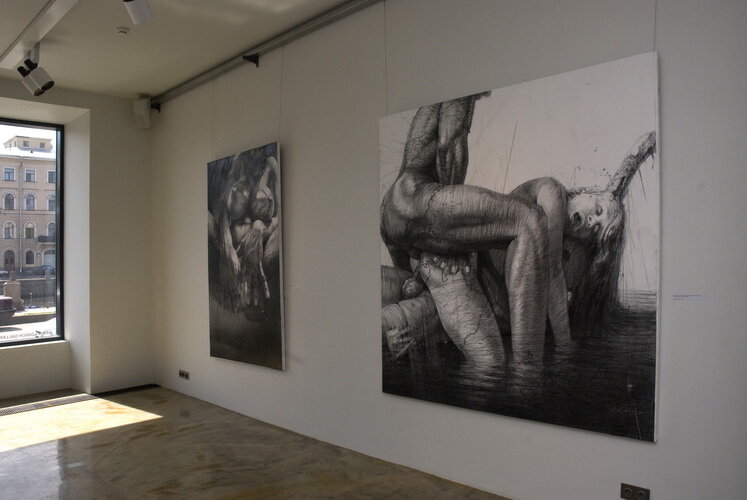 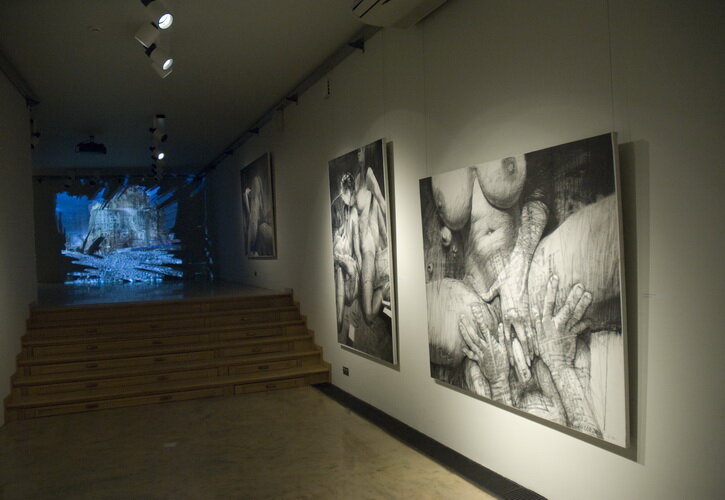 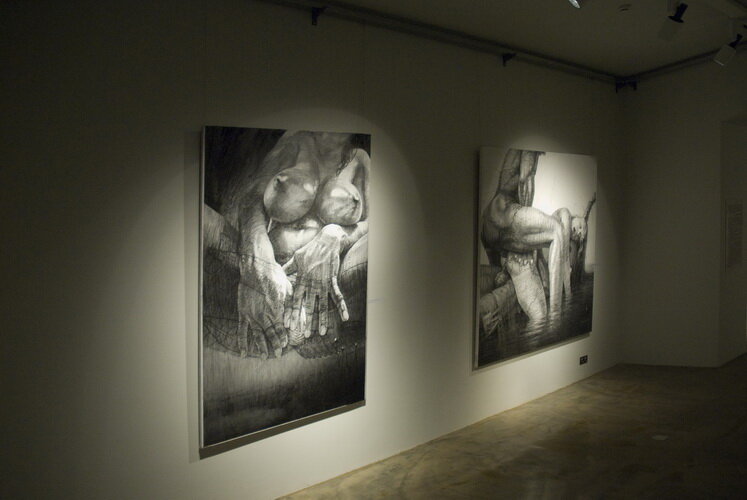 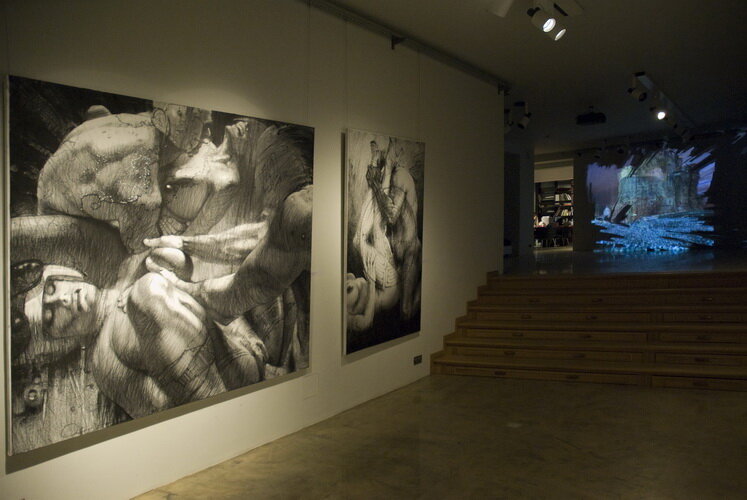 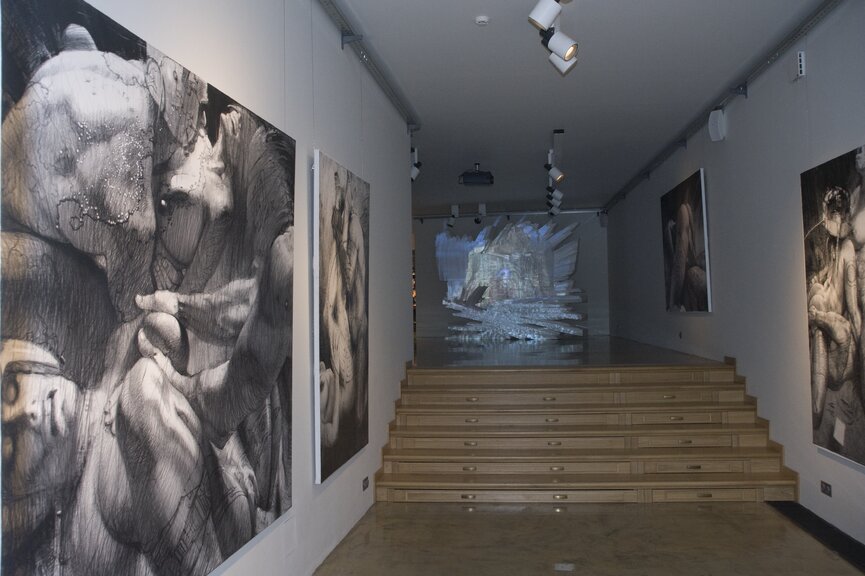