The mandorla signifies a stream of light, radiation and the emanation of the divine power. A spiritual space clothing the divinity in canonic art, it expresses the concentration of the luciferous spiritual essence. The semantics and energetic power of the mandorla led Bogomolov to depict it in the form of a rhombus, which has its own tradition in the history of Old Russian art.

The dynamic nature, plastic aspiration and rhythmic elegance of the diamond-shaped mandorla combine with the geometric definition of the second ground, underlined by the pattern of the “boards” in the background and the ornamentation covering the entire canvas. The composition is based on the principle of the conjunction of direct opposites, developing on the contrast of the bright, sharp-angled form and the calm, painterly, balanced background.

This contrast evokes the effect of reverse perception. The symbolical rhombus can be read as the link between the leaves of the “curtain” or as a soaring, powerful, independent, freely manifesting form on a contrasting, iconnic background.

Head of the Department of Art History, St Petersburg University of Humanities and Social Sciences, 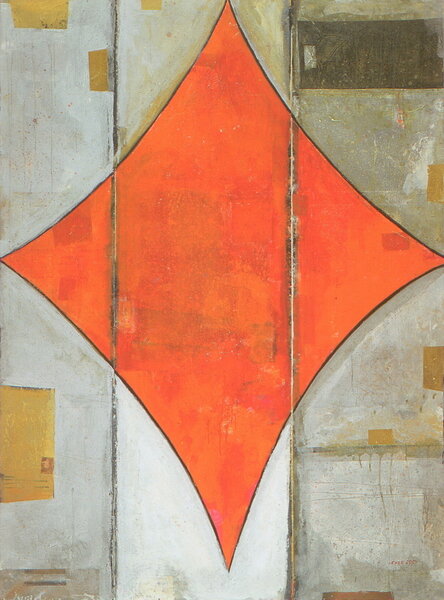 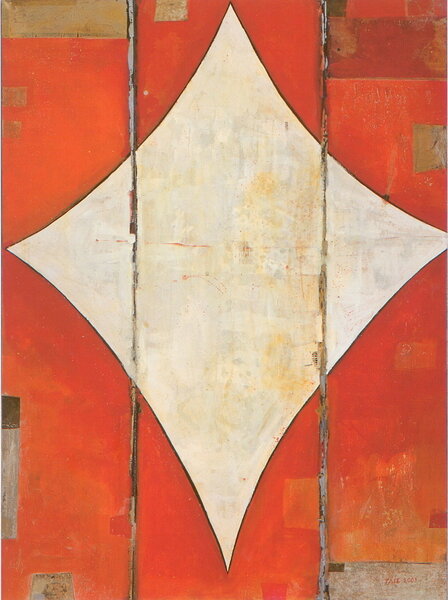 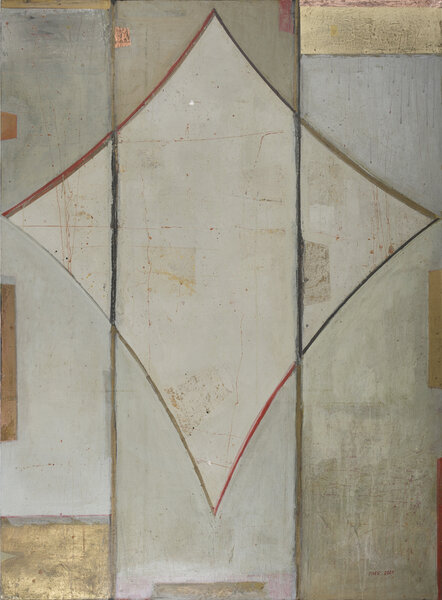 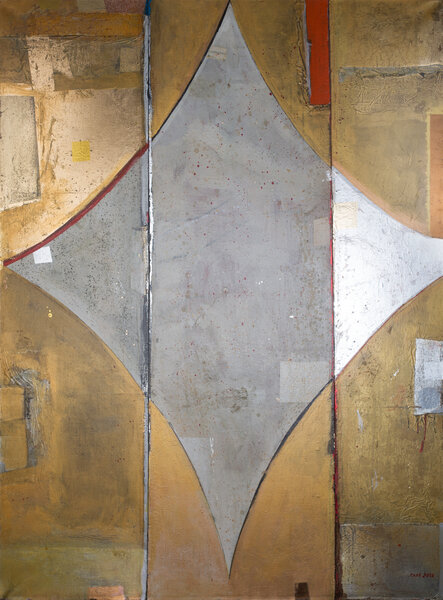 “Let me tell you how it all started. I looked around and saw who I was surrounded by: heroes, flunkeys, conformists, gladiators, eretics... merciless, vile, cruel, and arrogant... They are coming for us, they are near... < ... > Stop! Stay calm. It has always been this way, yesterday... a century ago... since antiquity…”

Painting portraits of non-existing persons is a creative act of rare courage. A composed hero acting in a dramatic picture with a subject is not, however, a rarity in the history of art. The hero is born in interaction with the other dramatis personae, incorporating conduct and character.

Bogomolov’s countenances are nothing more than that. An epoch - but not an event - can be vaguely divined behind them. And not just an epoch, but the sum sensation of ancient history, only not of pink-blue and banalised beauty, but a harsh time overflowing with blood and knowledge.

Frozen in icy silence, the countenances take something from Michelangelo’s David, in which contemporaries discerned a quality defined by the almost untranslatable term terribilità. The diapason is remarkably broad, ranging from the Roman emperors to the Byzantine sovereigns, icons, visions and, ultimately, an imaginary self-portrait looming through the mirrors of hints and time.

José Ortega y Gasset wrote in 1930: “This grave dissociation of past and present is the generic fact of our time, and the cause of the suspicion, more or less vague, which gives rise to the confusion characteristic of our presentday existence. We feel that we actual men have suddenly been left alone on the earth; that the dead did not die in appearance only but effectively; that they can no longer help us.” Bogomolov’s special talent allows him to extend slender, vibrating, yet reliable threads from the past to the present and future and to sense man in incessant and imperishable time, as a part of it. The famous psychologist Lev Vygotsky believed that “art is … a method for finding an equilibrium between man and his world [my italics] in the most critical and important stages of his life.” 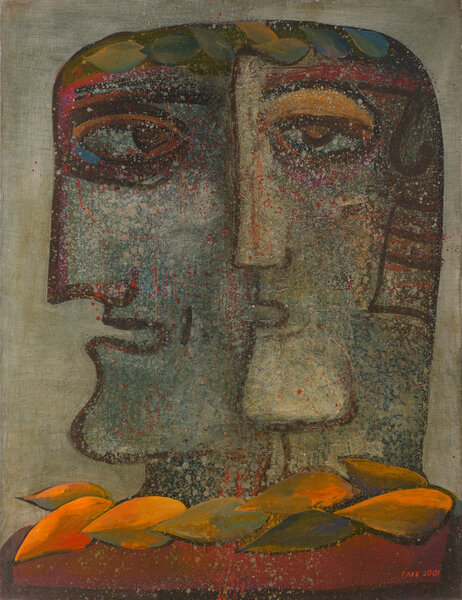 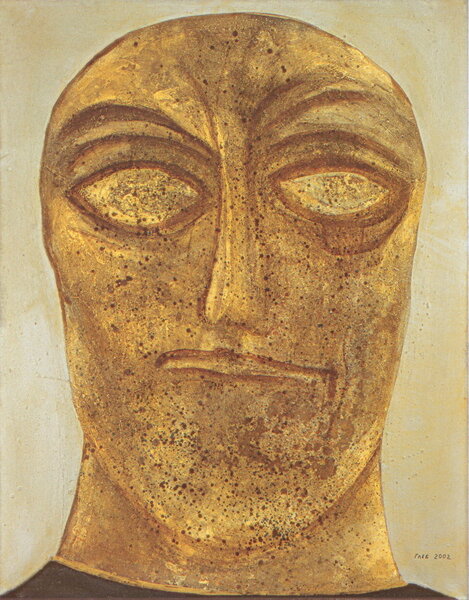 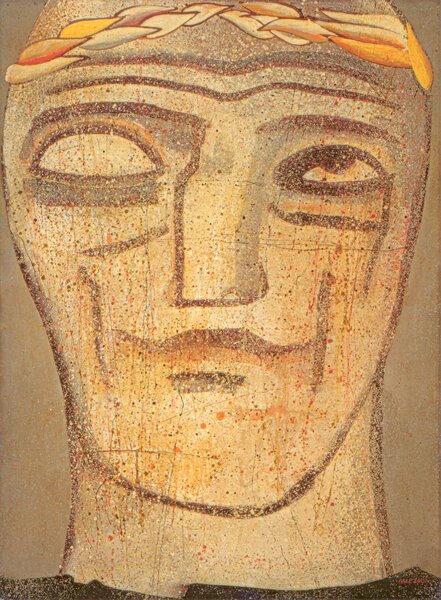 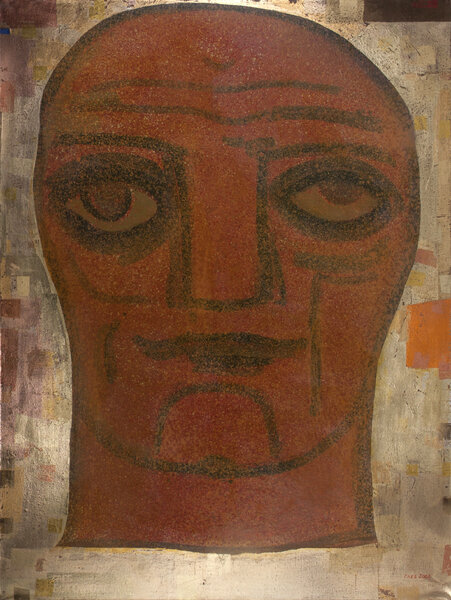 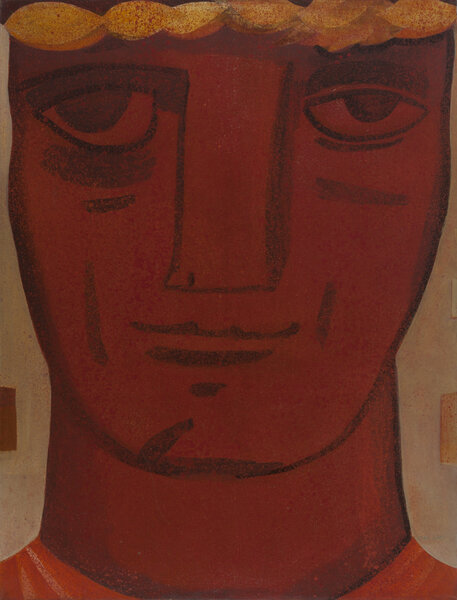 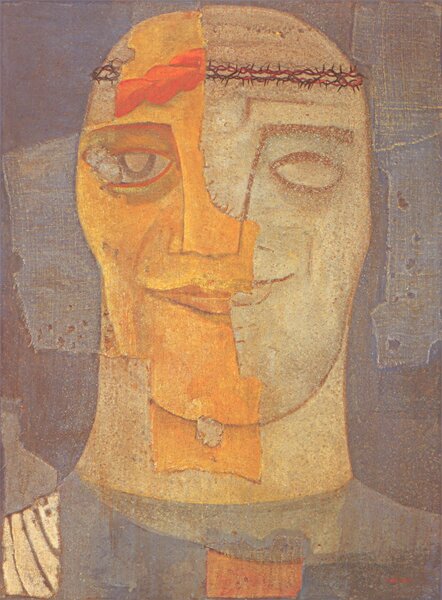 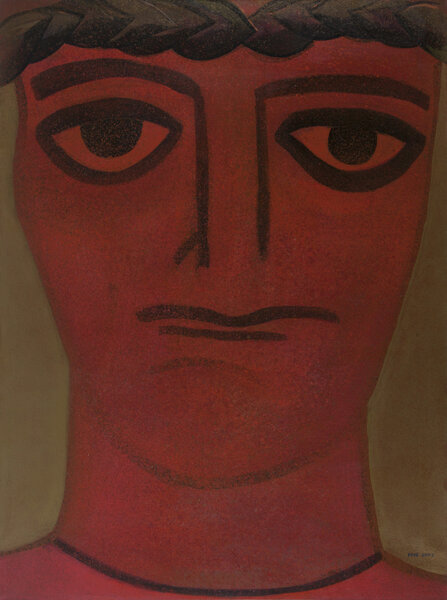 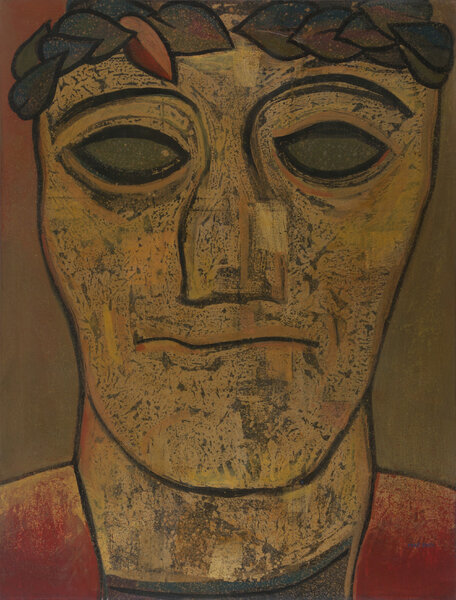 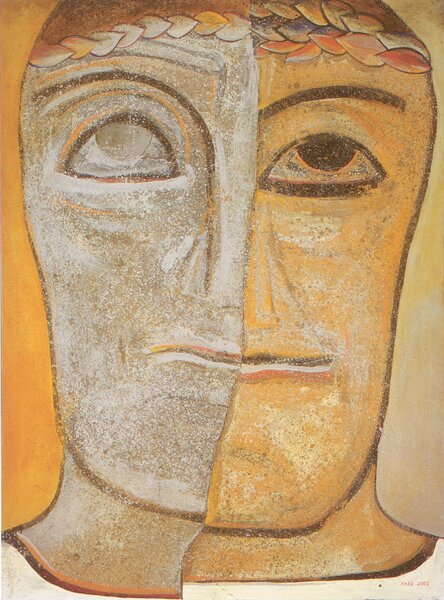 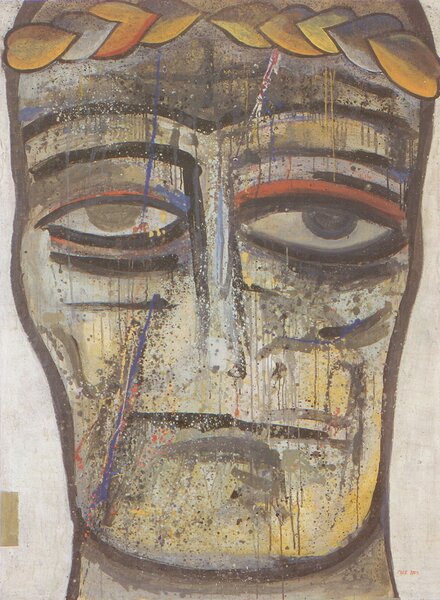 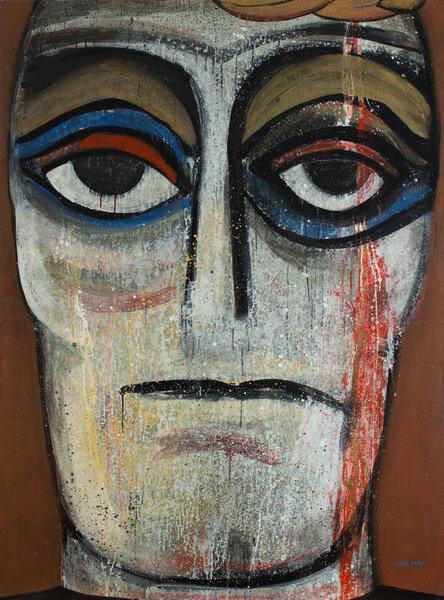 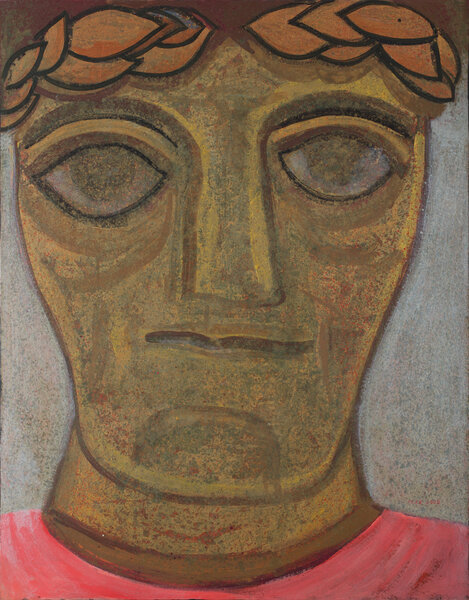 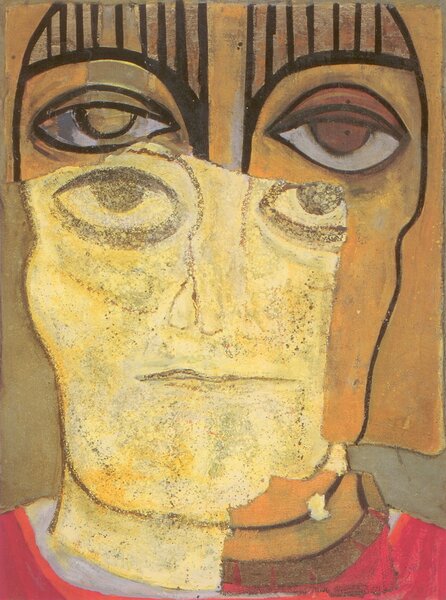 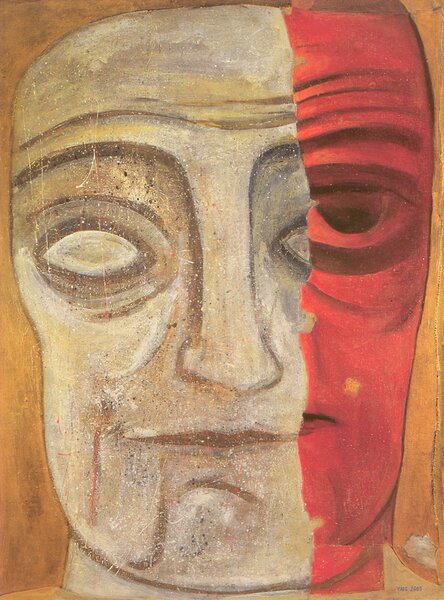 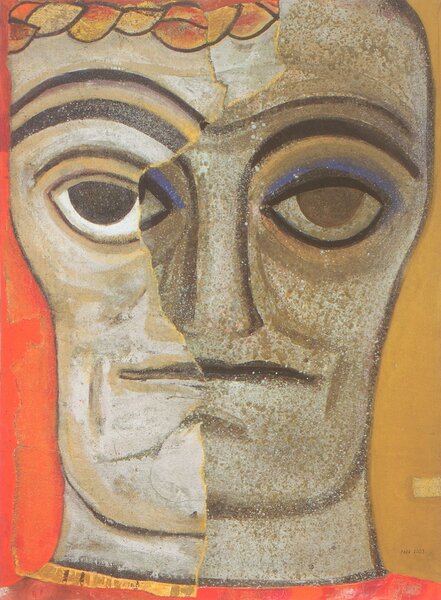 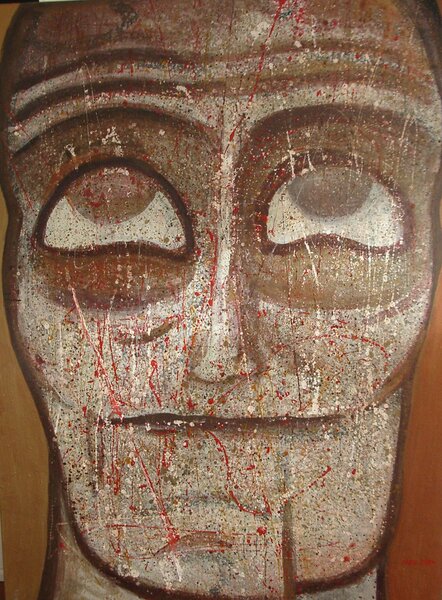 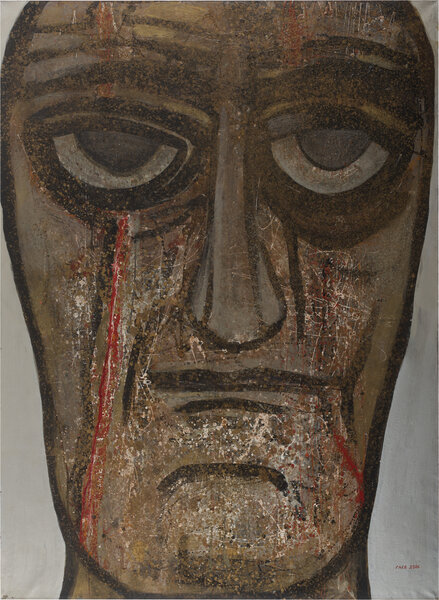 Portrait of an ancient hero (Palimpsest) #1094

“Long ago, in my childhood, in the war-smashed Fedorov Cathedral (in Tsarskoe Selo), among broken bricks, crumpled automatic disks and other Russian and German remnants, I came across a vest - beaten with bullet holes and in dried blood. I suddenly realized - there was a man inside her. Holes as a trace of tragedy and tragedies are an important topic for me. 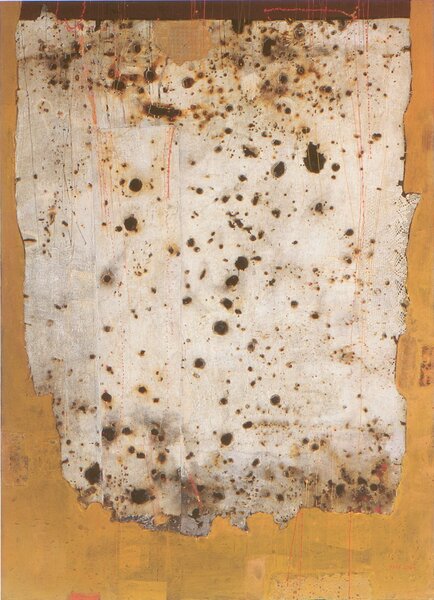 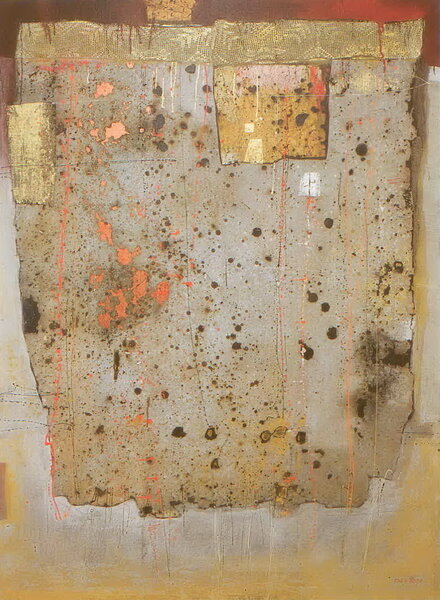