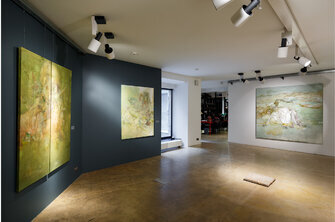 Rafflesian – this is what the artists named their project, hinting at the tropical parasitic flower, which is exceptionally appealing and beautiful from a distance, but has the foul stench of a rotting piece of meat up close. This attracts insects that perish while pollinating the plant. The rafflesia bloom is fleeting, like a flash, and then it turns into a dried up black box. To be reborn again, it must be crushed by elephants or hyenas, which spread its seeds on their feet and fur.

For the artists, this life form is comparable to the very essence of painting. The perpetual alternation of life and death, the immutable rituality of the process, and even the viewer, who is attracted by the flower's scent like a fly, or crushes the fruit like a beast... The overarching idea behind the project is a picture of perennial returnings, the blossoming and dying of painting, akin to rafflesia. If we reflect on the technical and formal aspects of the process of creating a painting versus the life cycle of a flower, parallels are discernible: glazing as returning to the same place; erasing and removing some fragments like decomposition or destruction of the painting's flesh; and finally, the completion of the work – a slow phase, when we admire its postmortem beauty. About twenty canvases of impressive size are intended to remind the modern viewer of the powerful force of painting, which still remains one of the most effective mediums of impact. At first glance, they appear to be large watercolor sketches, or the opposite – ruins of paintings, ethereal creations that preserve an echo of former greatness.

There is something shameless and repulsive in the ingestion, the penetration of each other, the interwoven bodies – and here it is revealed in the very nature of the art form, as if it shares the properties of living matter. In this series of works, painting itself is obsessed with ingestion, although the events taking place are veiled by the Baroque excessiveness that overwhelms and hypnotizes the gaze. The vicious vitality of the floral forms is experienced at the microcellular level in the fanciful lace of spider threads, in the swaying of unsteady jellyfish-shaped blurs; the eye has to continually guess at the obscure figures cultivated on the canvas like spots of mold on the wall.

Leonid Lipavsky and Georges Bataille had a similar definition of the concept of horror. For them, horror is something formless, elusive, slippery – something that is always present in life, like a revealing inevitability. Lipavsky insisted that there is nothing more terrifying than female legs. In the paintings of Vilkin and Begalska, people, animals, and flowers are intertwined in a nebulous ball where only individual blotches of flesh are distinguishable, like foggy dreams of an elusive object of forbidden desire that tumble into the indiscernible haze of the unconscious. "Eroticism," Bataille writes, "is a crazy world; a world whose ethereal form only covers up its hellish depths."

The oversaturated and thick fabric of the paintings, the onrush of images, and their languid sensual nature reference the aesthetics of Peter Greenaway, who loves to engage a rich selection of visual associations that draw up lines and quotations from diverse works of art all in a single scene. The artists play with citations as well, composing a whimsical game of solitaire out of imagery, narratives, and motifs. The lush attire donned by these paintings is intended to entice the viewer to join in a guessing game, to become an unwitting voyeur, only dimly aware of what is happening before his eyes. This unexpected move seems risky for the artists, who remain loyal to their chosen narratives, motifs, and themes. What once appeared to be a pedophile's wild punk graffiti suddenly turns into delicate, exquisitely nuanced and languid watercolors. This reversal seems to have the sole objective of discerning how the same situations can be endured by their characters, who are transformed from teenage punks and pubescent girls into noble beauties and sentimental nuns.

A succession of morphological similes and transformations allows us to interpret the depicted figures as one large organism in the process of growth, agglutination, division, decay, and death. The coquettish subtlety of the paintings only barely covers the bloodthirsty, infernal and pornographic apparitions, just as old faded photos can unexpectedly reveal evidence of a crime once committed. The very title of the project is an allusion to Rabelais: Rafflesian – Rabelaisian. It is evident in a meaty, fleshy inception and a fanciful mind game where dirty jokes connote erudition and wit reveals itself in the subversion of words, the swaying of puffy bodies, and a feast of flesh. The paintings of the Flemish and Dutch schools invoked by the artists are synonymous with the Rabelaisian spirit. The seductions of the sensual imagination pick up on and blend together imagery from literature and art. And so the snarling dogs who track the beast with the hunter in Flemish paintings now appear in a hunting rage, as if Panurge is using a cynical prank to teach a certain lady a lesson in return for her rejection, but in the form of drooling lustful hounds.

This is the continual counterbalancing of the romantic and sublime with the carnal and shameless – and clad in a manneristic story, where the excess and overgrowth on the canvas is capable of including diverse narrative elements. It is no coincidence that one of the works, "Arcimboldo", directly references the Italian Mannerist's work "Summer" – except here a dog is jumping on the fruit-and-vegetable head right in the picture in the frame, and tormented by desire as it hangs there. The artists contaminate the motifs and pull together meanings such that desire and the erotic inception lead to death, ingestion turns into a cannibalistic feast, and flowering ends in decay. Dogs function as tricksters with a constantly changing role. In "Conspiracy", they unexpectedly attack the hunter, snarling fiercely, ready to tear into him. In "Eve", a dog climbs onto a naked female figure, replacing the swan in the classical picture (Leda and the Swan). In "Temptation", where indistinct flashes and the glare of sunlight uncover a woman in a nun's dress, it all seems like a delusion, as does the silhouette of a dog writhing with desire that spontaneously appears on the wall.

Like rafflesia, the artists themselves are parasites on the paintings of the old masters. Their work contains a wide array of paraphrases, references, allusions, and quotations related to the golden age of painting, when the optics of the gaze trained vision to be tactile and sensual, with the emergence of the erotic experience of the canvas as elusive texture, and the plot and the body as objects of desire. The return to this world after having lived through death more than once is what adds a particular aroma to this art, worn and faded, tender and languid, as befits a Sleeping Beauty who has just awakened from a long nap. Like the princess, its existence is shadowy and elusive, but we can already glimpse the distinct features of a new reality, both enticing and repulsive at the same time. 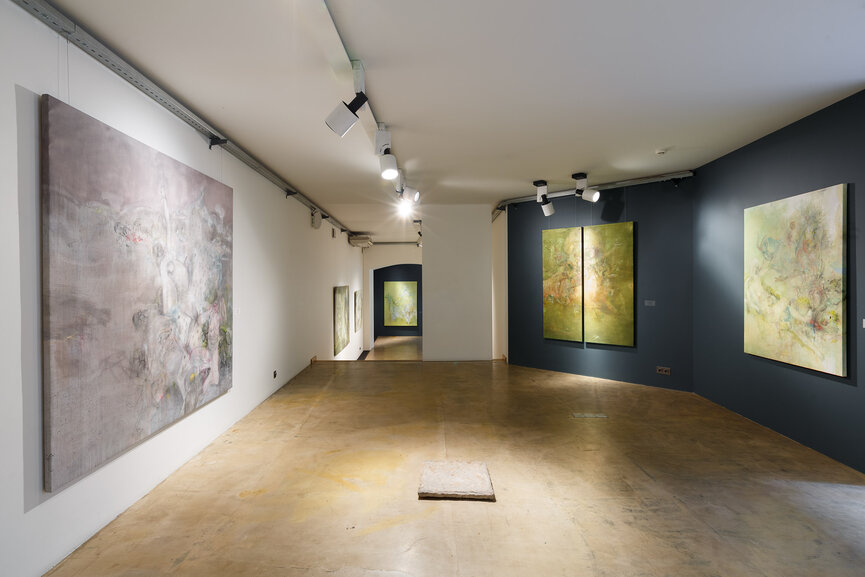 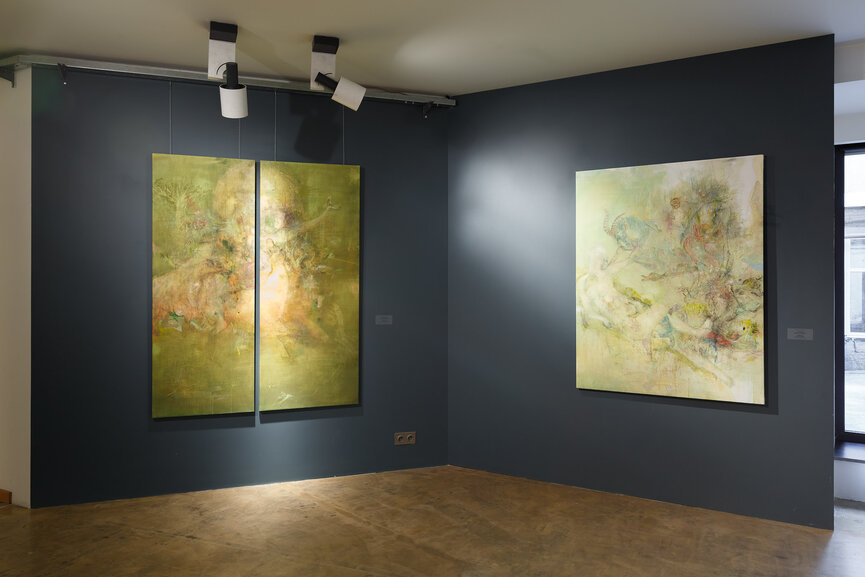 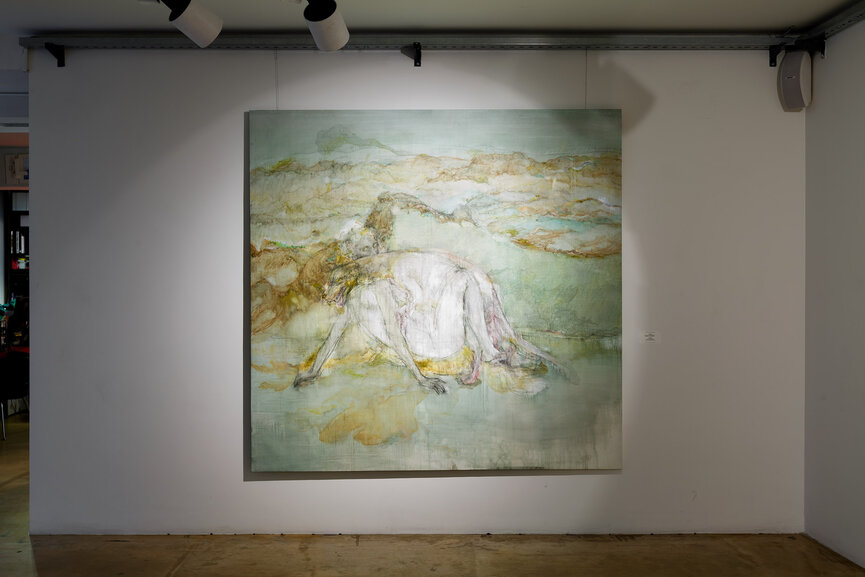 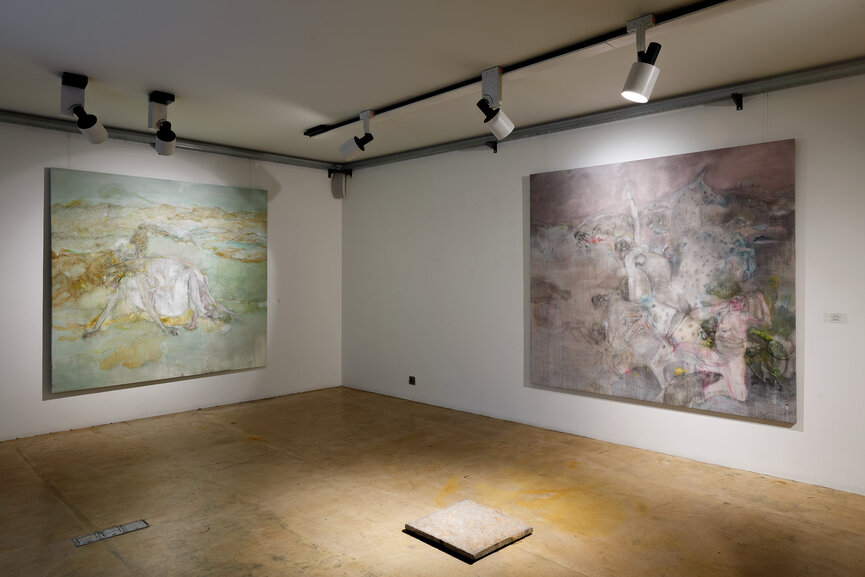 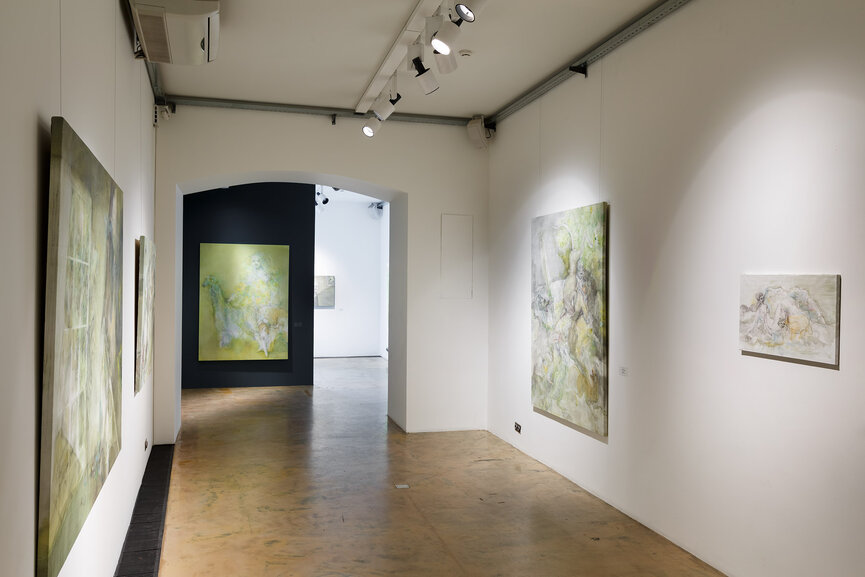 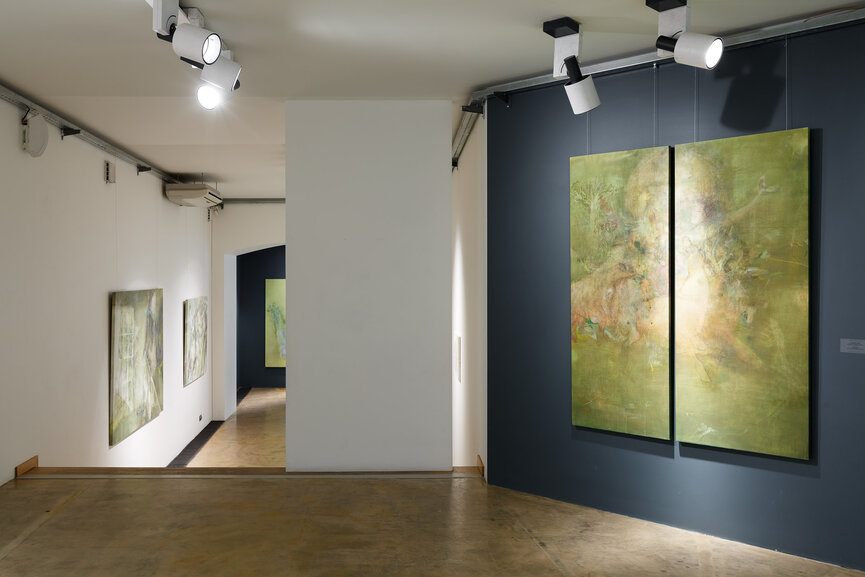 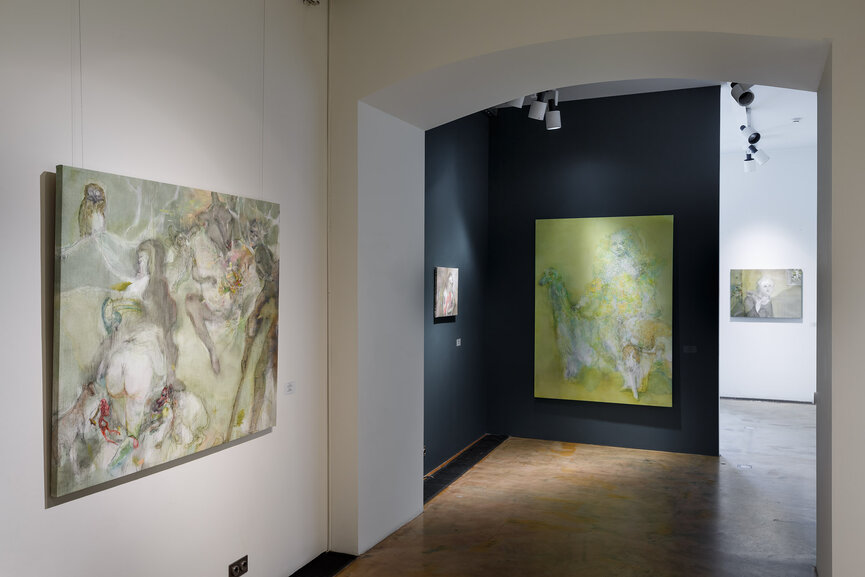 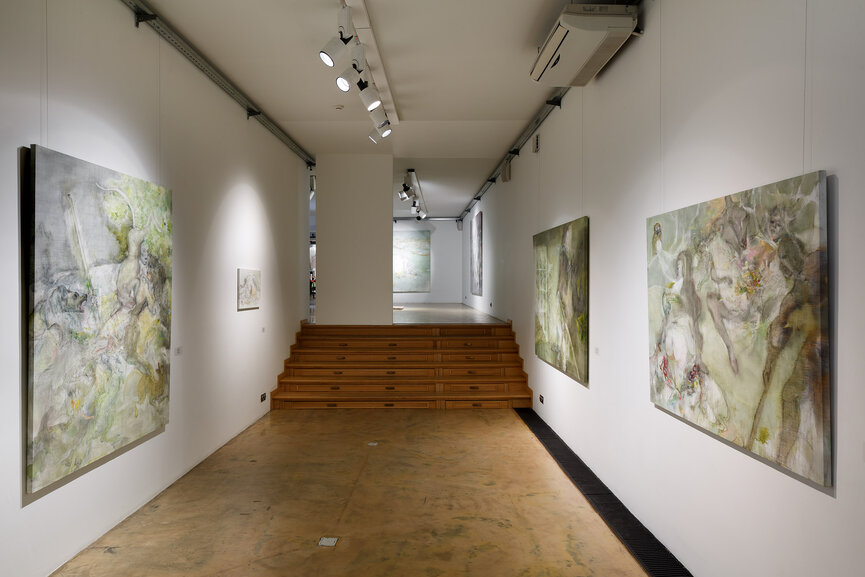 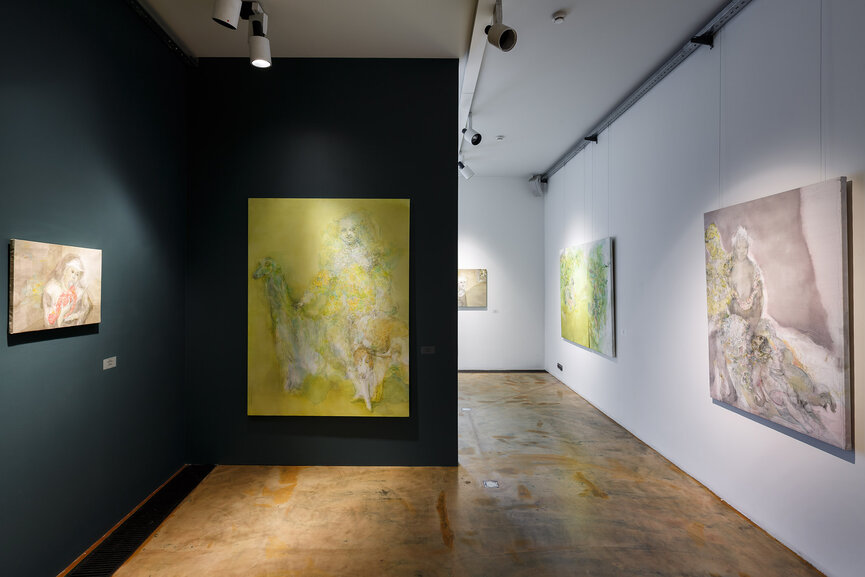 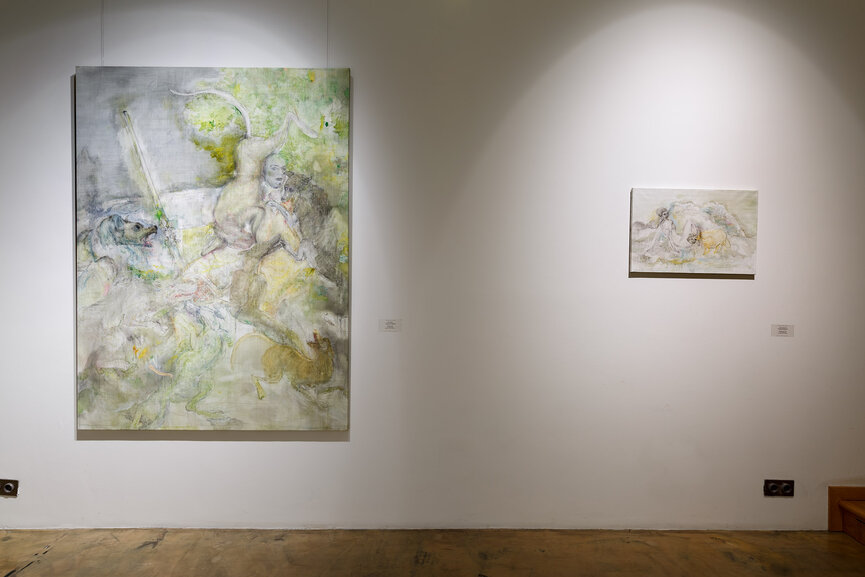 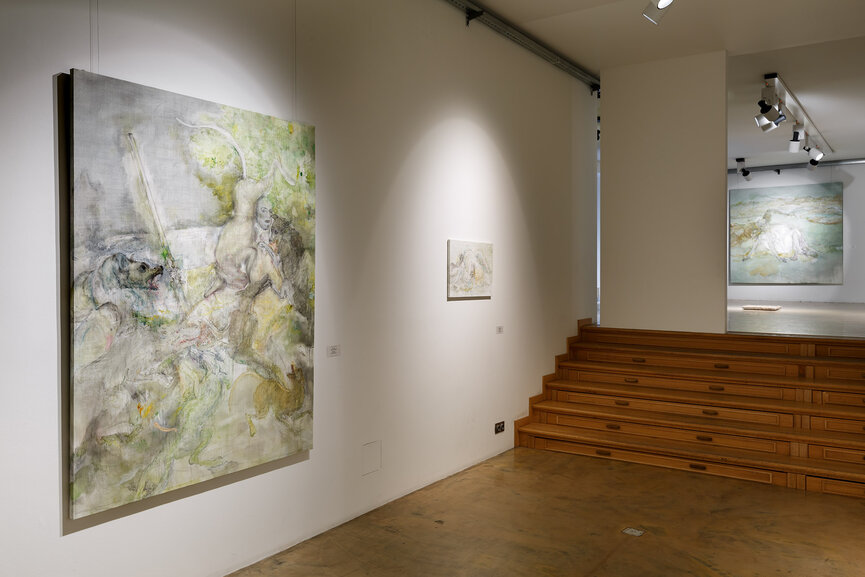 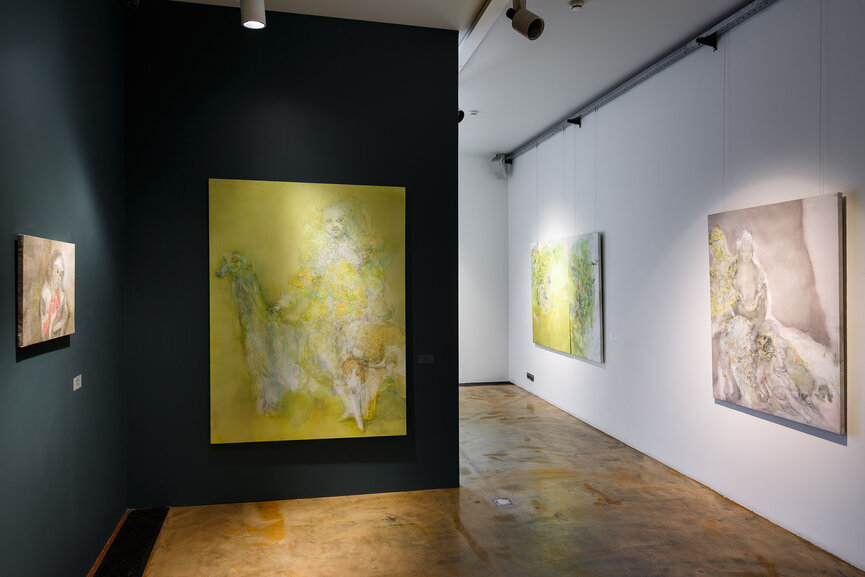 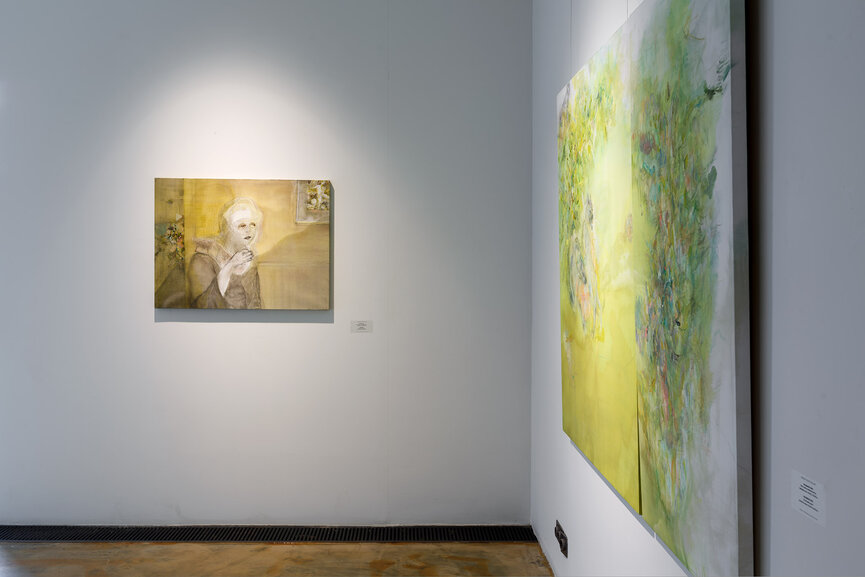 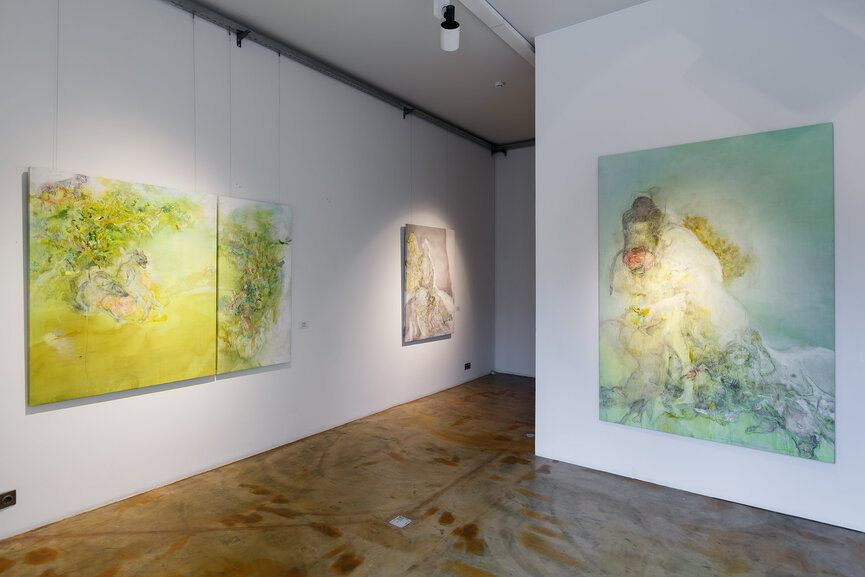 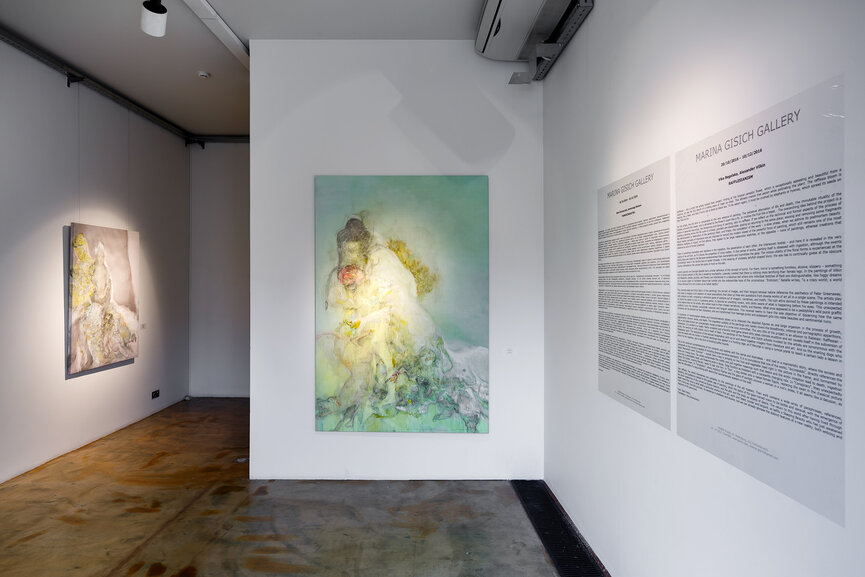 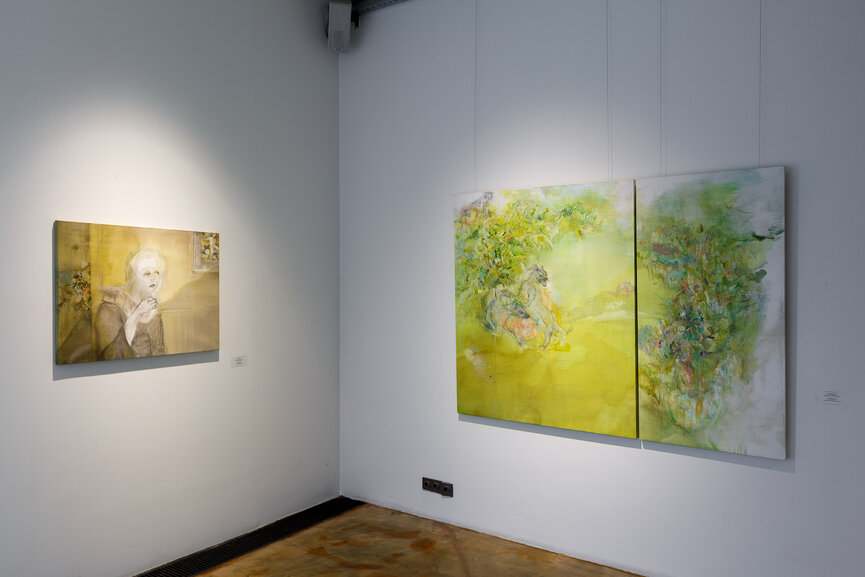 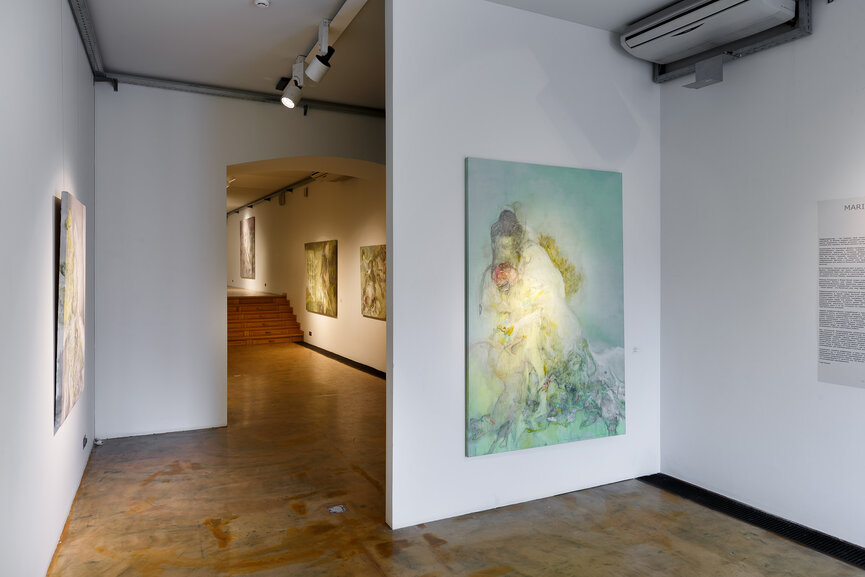