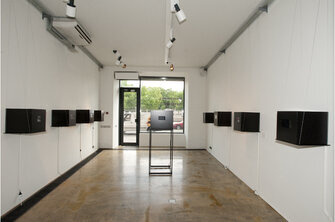 The name of Marina Alexeeva’s exhibit “Liveboxes” can be understood as “living boxes”. It also plays on the word “lightbox”, keeping the “light” aspect, as something alive that is burning and bright. The adjective “live” is normally used for real-time transmissions of shows, and of course, for what is vital and connected to life. These are the types of many-faceted works Marina Alexeeva creates. Her miniature interiors in boxes originally represented fabulous Russian Euro-style remodeling. Later, entire buildings with penthouses and sports bars emerged; after that, collections from museums of various profiles. Marina Alexeeva started turning TV screens on in her rooms and showing the films made by her husband, artist Boris Kazakov. The first video experience was in the “sick room”, where we discovered a penguin next to a bed with balloons, along with clones of the athlete Malevich, and a doctor in his white coat, whose ties seemed to cut into the viewer’s brain like a crooked incision by the scalpel. Soon after that, Marina Alexeeva began working with video art successfully herself. Assisted by the optics researcher Sergey Karlov, she began projecting video into the interior so that the viewer does not notice the screen, observing activity in the room as if it is on the theater stage. In her newest works, she opens every wall in the room-boxes, making it possible to watch four performances simultaneously in the shared space. Should we be surprised then that these ingenious “Liveboxes” are enjoyed by dozens of viewers all over the world, from Sir Elton John to old friends of the artist, who love to gaze into their boxes from time to time? There is a certain desire to occasionally check whether something new has appeared there, or to glance at the details of a magically organized life, where you enjoy even the motley cosmic trash floating by the porthole window, if, thanks to the artist, you have become the owner of an international space station.

The ever-increasing success of the “Liveboxes” series – currently one of the most in-demand works of Russian art – can be explained by the fact that Marina Alexeeva’s boxes are connected to multiple facets of our artistic and everyday experience. They are not only “built-into” the self-description of relevant art, but they also unite cultural tradition with fresh modern-day customs. Most importantly, Marina Alexeeva includes one of the most significant functions that make modern life attractive: she turns standardization into a playing field. This method is the foundation of all the brilliant inventions of the 20th century, from Bauhaus to IKEA, which beautify the lives of millions. Even Malevich, an inhabitant of the first “profitable” houses, predicted that people will live “in a square” and built standard housing for “land-dwellers”, reminiscent of geometric versions of cells of the catacomb Christians. In practice, the “universal housing unit” was immediately decorated by a design that played with the artistic tradition. Back in the 20’s with serial constructivism, it was fashionable to decorate in the style of a just as new discovery – the tomb of Tutankhamen, the elite “housing unit” in post-mortem mode. Inside Marina Alexeeva’s lightboxes, there is always a transformation of a standard going on. The viewer is at first delighted, recognizing the familiar (for example, a cabin porch with a deck chair), then gets excited upon discovering that the familiar sight is actually surreal, thanks to one or two details (at the very least, a tiny scrap of lace hanging on the wall like a macramé carpet). Any object in its normal place can, here, unexpectedly demonstrate freedom from stereotypes of behavior and perception. By faithfully following standards and even painstakingly reproducing the canon of Euro-style remodeling or museum design, Marina Alexeeva lets us see the surrealism of standardization. In real life, naturally occurring standardization is astonishing in its infinite combination of elements, which man-made standardization cannot achieve. Marina Alexeeva copies nature not in the sense of increasing the diverse versions of something, but by developing mimicry of the world’s vivid transformational power. In her boxes, a plethora of small objects, usually souvenirs - the “dust” of the great world of things - represent all sides of life, from homeless shelters to brokerage houses, from local history museums to videoart exhibits. The superb level of art in these “Liveboxes” is supported by the artist’s ability to look at things untraditionally and see their essence – new images.

“Liveboxes,” along with other works of relevant world art, attests to the “anthropological swing” of the newest culture that took place in the second half of the last century. In the most general sense, it is about how the anthropogenic factor is becoming determinate in the life of the entire planet, while at the same time the notion of personhood and the role of the individual are becoming ever more indeterminate.  Modern art assigns itself the task of collector and criminal investigator and presents a collection of objects, like the physical evidence at a crime scene, which can be used to reconstruct a picture of the world of the subject who owns these items. (The artist “forgets” a bag of food smaller than a thimble in a 24-hour store.) By showing how the subjectless organization of the world is intensifying, relevant art keeps striving to hold onto at least the corporeal presence of a person, the tracks of his sojourn in this life. The pioneers of this process were the Surrealists and the Dadaists, collectors of paradoxical situations in the life of modern man. Kurt Schwitters, Marcel Duchamp, Man Ray, and Joseph Cornell became the authors of the first strange object collections, taking off from the four prototypes of a similar practice in the old culture: the creation of every possible type of model and “dollhouse,” suitcase designs for travelling salesmen, and, of course, church reliquaries. This “school” was presented at the English exhibit “Worlds in a Box” in 1994. The boxes that Marina Alexeeva has produced over the last ten years make up an exhibit equal in size. And she unexpectedly captures the agoraphobia of Cornell’s worlds in boxes, translating this tradition into a different expanded plan, because she has set before us nothing less than “Liveboxes” – inhabited spaces.

The main change in the artist’s work over this relatively long period is connected with expanding the video presence. The introduction of live imagery decidedly altered the appearance of the models of homes and public spaces made by Marina Alexeeva. In the very first series, the screens not only brought life to the interiors, but linked them to the surrealistic reality of the present day: to the online broadcast of a mega-show. However, in perfecting her technique, Marina Alexeeva changed her standard perception of modern housing as a place for the passive reception of television or computer signals. She needs the video picture specifically to populate the box with the image of its owner and set aside a “doll” in each little house. With an increasing number of volunteers ready to be filmed in the artist’s shorts, she started showing scenes from the life of high-society beauties and prisoners, passengers, and babies barely starting to get themselves around. In her most recent work, which can be examined through four windows, Marina Alexeeva has presented the classic story of human life: infanthood, youth, maturity, and death. However, in the artist’s Dadaistic style, the last two scenes do not look completely traditional. But as we know, Marina Alexeeva’s independent art (not some trendy Barbie-imitation toy fashion, but solitary cultivation of the playing field, playing herself), along with her place of residence, are unusual.

The beginning of the work on “Liveboxes” coincided with the artist’s move to a new studio: a house at the turn of the last century from the previous one, situated in the cottage neighborhood of Shuvalovo-Ozerki.            Over the last few years, this region has been built up with condominiums of every possible standard and high-rise apartment buildings. Now the cottage (“dacha”) in the hundred-year garden looks like the latest theatrical 3D model itself, surrounded by new construction, which always looks like it’s made half out of cardboard, despite its inhuman scale. The tall granite-faced foundation, the copper-bound steps, the colored glass on the terraces – all of this is both strange and very vivid at the same time, pulling you toward itself like a portal to a different life, which is not necessarily antique, but is transformed by art. It is this protected standard that Marina Alexeeva rigorously follows in her work, meaning in each day of her secret life in “Liveboxes”. 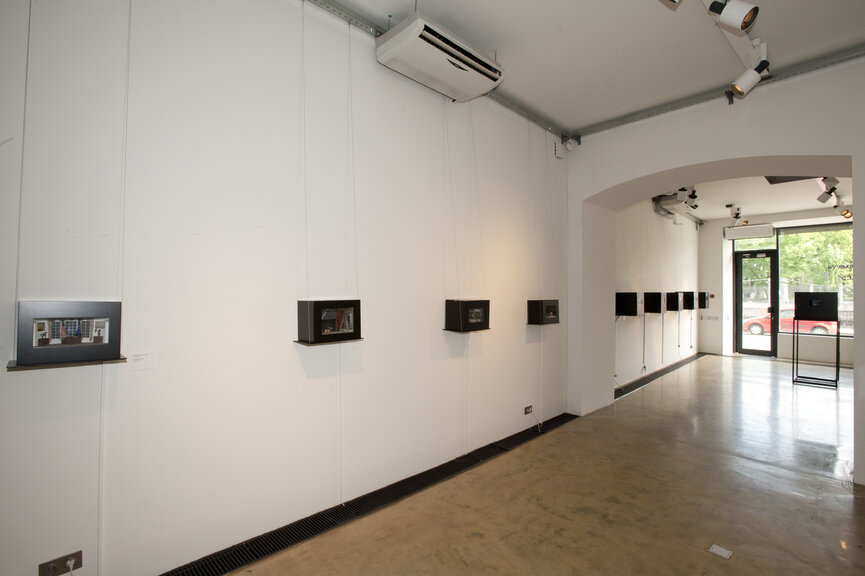 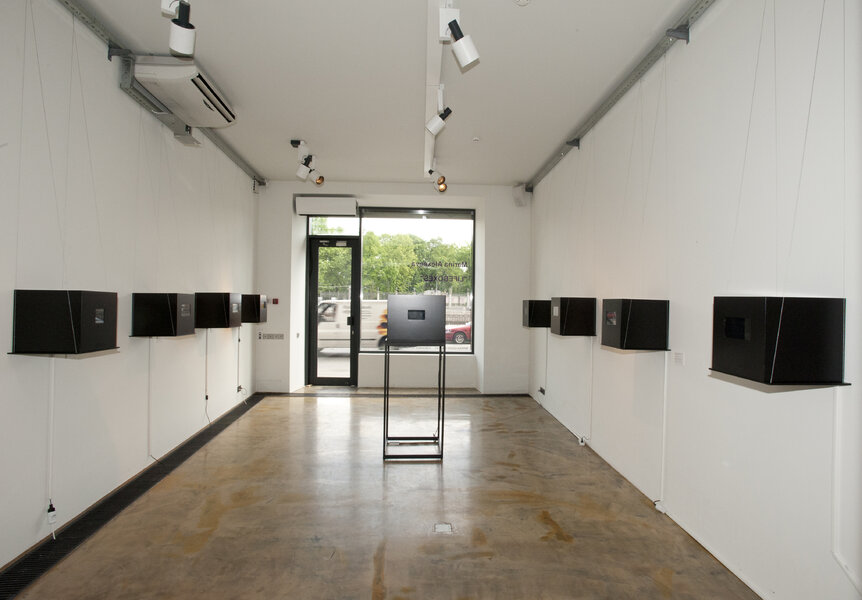 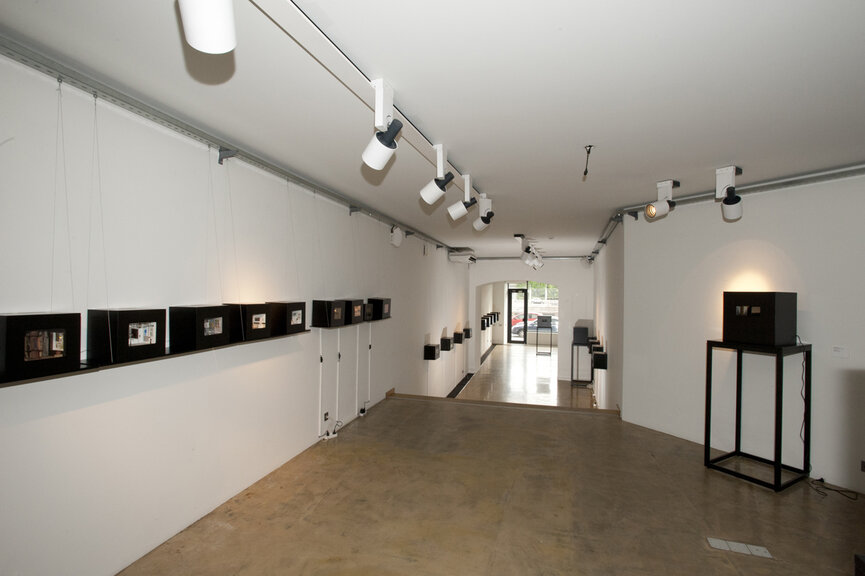