Kirill Chelushkin (b. 1968, Moscow, Russia). A theoretically ideal pattern formation arose – form follows the movement of elements inside the frame, the scene, as if it becomes its materialized echo, a kind of dictated action to follow. The idea of the materialization of light, of light as a sort of absolute body. And of shadow as emptiness, as the absence of light, as a hole or immateriality.

The object of space, as endless attempts have been made to actualize it, squeeze it in, adapt it to the reality of the screen, is incarnated at least in this ephemeral form. The inverse perspective system of iconography here finds its embodiment in a natural way. The projection of light in space works precisely according to the law of inverse optics, but not on a flat surface. In order to avoid distortion, the rules of inverse perspective must be followed strictly. At the same time, this type of videosculpture provides us with a model of proto-3D technology. This is 3D done manually. A flat image, using projection, seems stretched onto its three dimensional model. On the computer, this is a mathematical, virtual model. In our case – weightless, white, artificial and material.

The next idea finding its embodiment in videosculpture is “space as an object” and “event as a thing”. Unlike most art practices, which are striving for a “breakthrough into space”, here it is more likely to discuss the opposite type of procedure, the conversion of space and event to object and thing (the word “product” begs to be added as well). Histories and stories endlessly multiply and breed; the quantity of events is so large that there arises a desire to subject them to compression, pack them up, zip them into an impossibly huge file. Similar to the ideas of Claude Shannon: in order for information to be consumed, a narrow channel is needed, rather than a garbage dump. 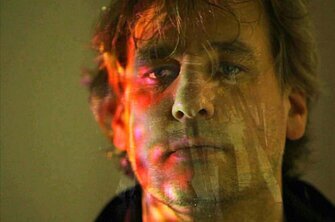