Vika Begalska (b.1975, Kharkov) and Alexander Vilkin (b.1982, Snezhinsk, Chelyabinsk region) are two absolutely different, well-known, and independently established artists. Vika Begalska, a former student of the Kharkov Academy of Design and Arts, is famous for her radical feminist projects and unexpected pictorial experiments. Alexander Vilkinis a member of the St. Petersburg-based groups Parasite and Prosthesis, he is known for his “wild primitivist graphics and painting.”

Vika Begalska and Alexander Vilkin began to work together in 2014, when, together with Diana Portland, they founded Teresa Creative Union of sex-workers and artists. Creative communication is carried out there regardless of gender, sexual orientation, ethnicity, citizenship, and religion.

During its existence, the creative union has created several performances, conducted a sociological study, and published the book titled Love for Money. The puppet show Aphrodite's Girdle was nominated for the Innovation Prize 2014 in the Work of visual art category. Since 2016 the video recording of the performance has been in the collection of the Museum of Contemporary Art M HKA (Antwerp).

While observing the art projects of Vika Begalska and Alexander Vilkin, one cannot fail to note the special poetic world of artists. Moreover, in this world there is an equalization of completely different characters including inanimate ones. Knight-insects, a flower, a sudden explosion of the texture in the canvas; a strangely dressed character is adjacent to some kind of semi-abstract painting. There is a total mixing of everything, de-anthropomorphization, rejection of anthropocentricity, everything is equalized so much that sometimes the charactersfall into the picture. It is the poetic component that allows to combine the incongruous. Repetitive motifs, images, rhymes, rhythms – all this makes the works of artists literally tactile. 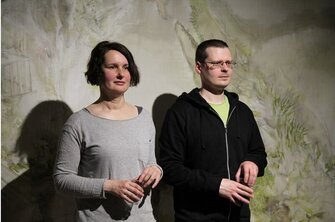